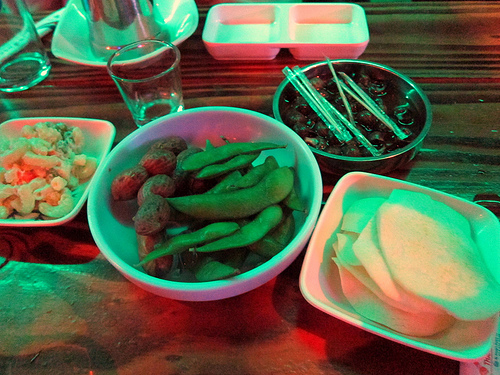 A few months ago, I joined the Gastronauts, an adventurous eating club. I hadn’t been able to go to any of the suppers until a few weeks ago. I had always wanted to try the live octopus at Korean restaurants and when I found out this was part of the menu for the live seafood dinner at Wassada, I jumped at the chance. 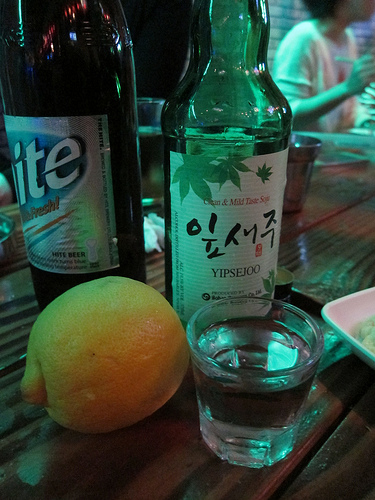 Eating the tiny sea snails took a lot of patience. First you had to snag an end with a toothpick and hunt for the bit of nothin’. After trying about a half dozen, I gave up for bigger game- booze. Here comes the soju! 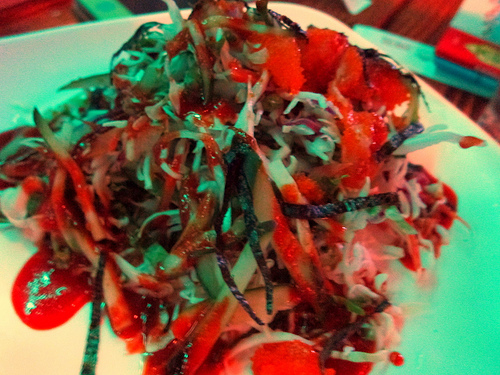 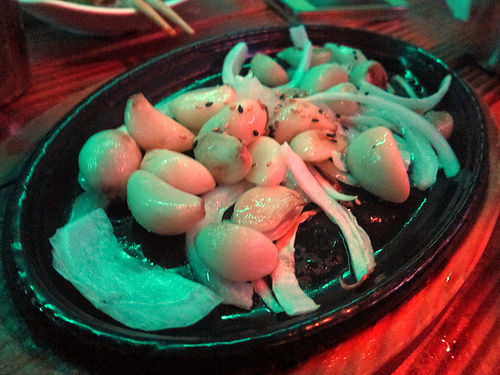 After a light tuna salad with seaweed, we were given the wriggling chopped up octopus along with some grilled onions and garlic. 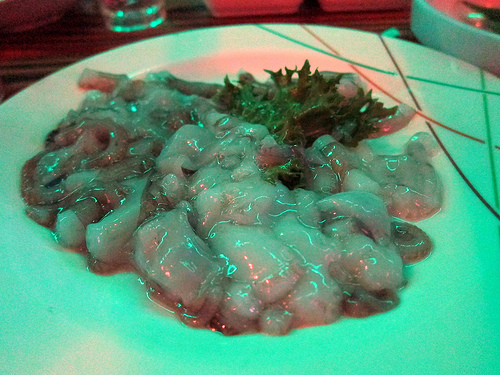 I was surrounded by people moanin’ and groanin’ about the wriggling “live” octopus. It’s not really alive. But you could probably well imagine it was on its way there. I first picked up a few pieces and then added the seasoned oil and Korean hot sauce (gochuchang). The reaction of the sluggish pieces was terrific. They were certainly writhing now.

And then chomp. I chewed and chewed. And then swallowed. My second piece put up a bit more of a fight. It was grabbing onto my tonsils. I actually had to spit that piece out because I was terrified it would glue itself permanently to my throat. The next few pieces were much easier to eat. Considering I’m actually not a huge fan of raw octopus at sushi, I thought this experience was actually okay. I’ll stick with raw (but not moving) stuff from now on. 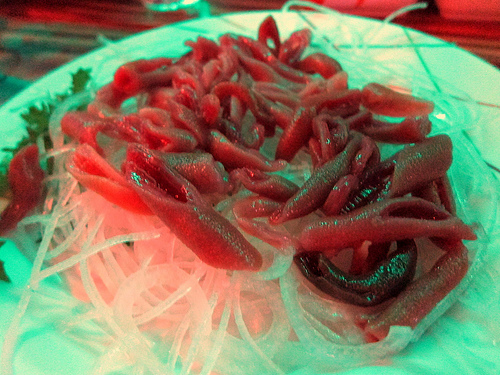 We were sitting under a neon green light so it cast an eerie glow on what we were eating. When lit, our food took on sinister meaning. The sea worms did not look like anything I wanted to eat. But later I would wish I could find something familiar about the food, like the worms I had earlier. These were chewy. 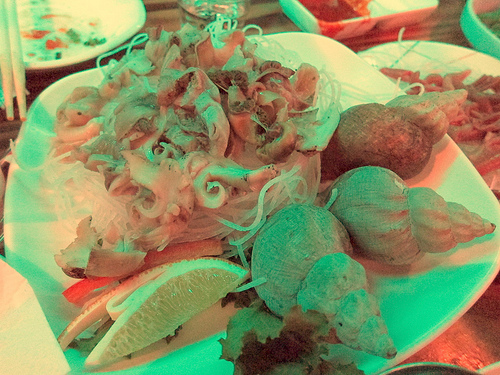 Unlike the first time I had giant sea snails, I didn’t particularly care for this version of them. These sliced pieces were meant to be dipped in the ubiquitous Korean sauces and eaten with the grilled onions and garlic. 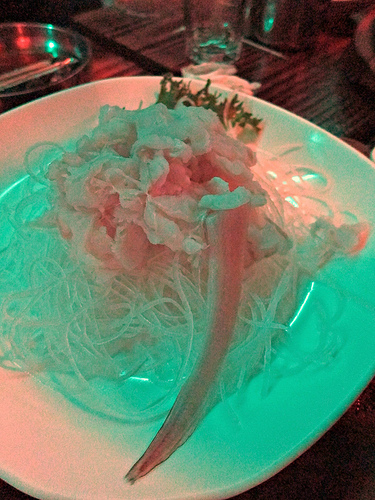 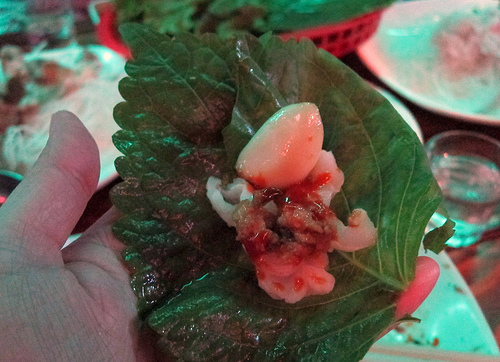 Lemme tell ya somethin’, live eel is somthin’ else. Never will I mind the almost boring choice of broiled eel (unagi) at Japanese restaurants. Eating this bit of translucent flesh with perilla (sesame leaves), sauce, grilled onions and garlic left me desperate for something a bit more. Oh yeah, more soju.

It was funny though trying to convince people to eat the long tail. The expressions of my dining companions were most comical. 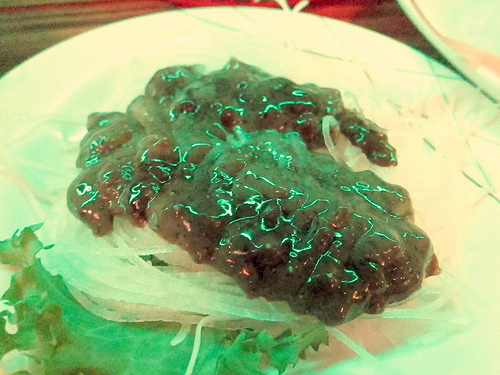 Inexorably, we were moving towards a more “gross” path. I happen to love crunchy sea cucumber. I did not however realize I never had their intestines before. This was…crunchy and not in a good way. I thought I was crunching through spine. How are these intestines? Lost in translation? It’s probably not necessary to mention this was also raw though not very slimy. 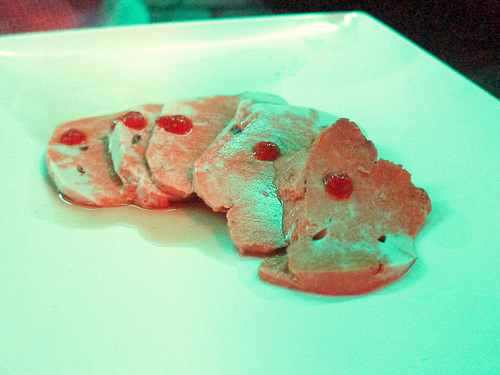 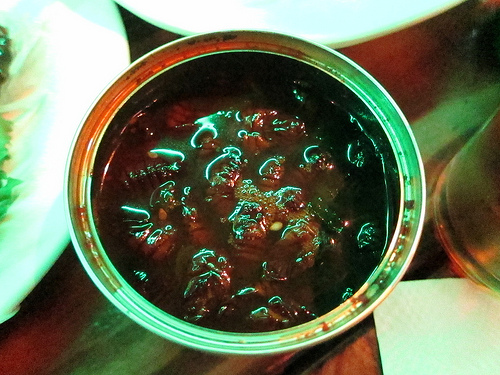 Then the restaurant gifted us with a special treat, silkworms. Um, these were just heated in the can and brought over to us. It emitted the most noxious odors. 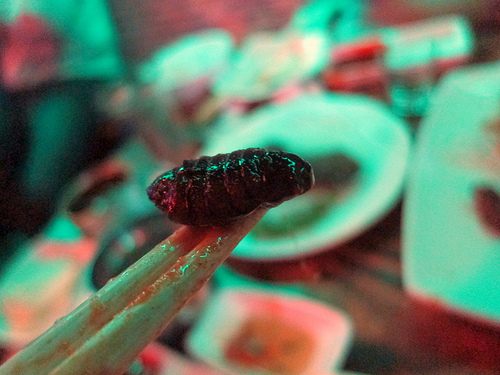 Of course I ate it. More soju, please. 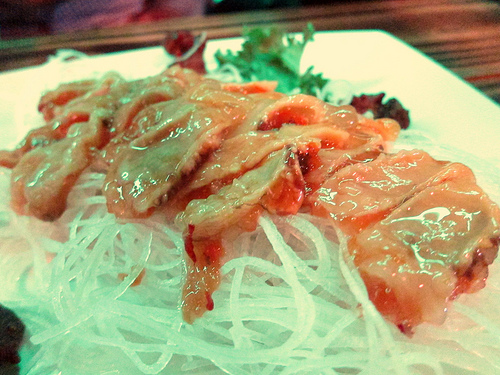 Accompanying the sea squirts were bits of dark stuff on the side. Don’t eat those. Otherwise, the sea squirts themselves were rather tasteless. Good thing I had plenty of sauce, huh? And yes, we asked for more grilled onions and garlic. 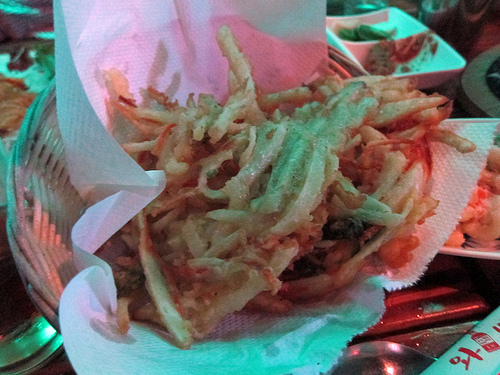 We had some fried tubers and the table was once more a happy group. 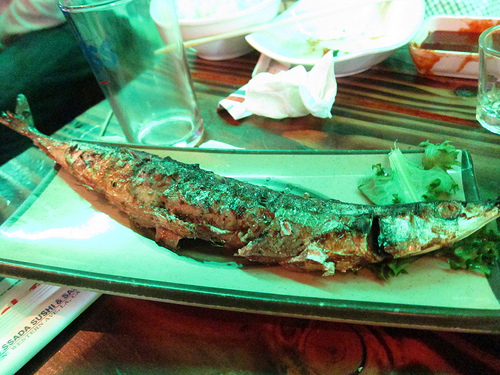 I never thought I’d be so happy to see a simple fried fish. 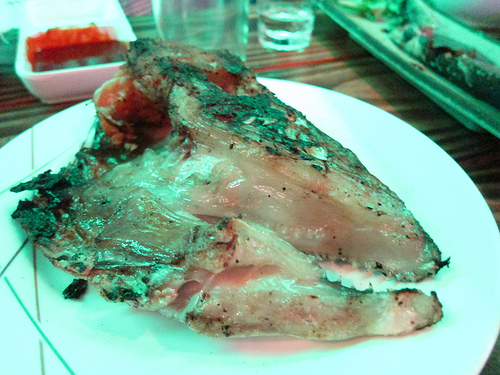 Even the grilled salmon head was welcome. 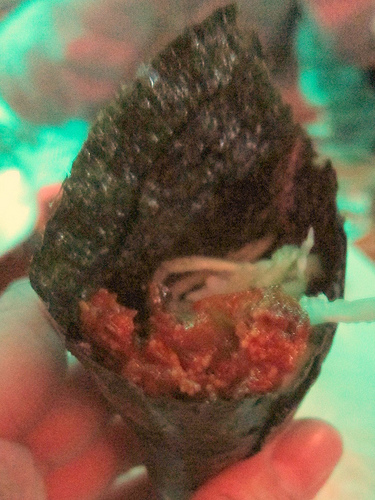 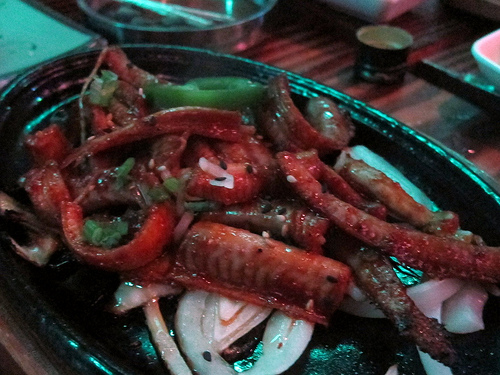 Although grilled with onions, the sea snake wasn’t very tasty. And I’ve had snake before that was quite good. Perhaps if it was prepared with a bit more seasoning. More grilled salmon head for me, please. 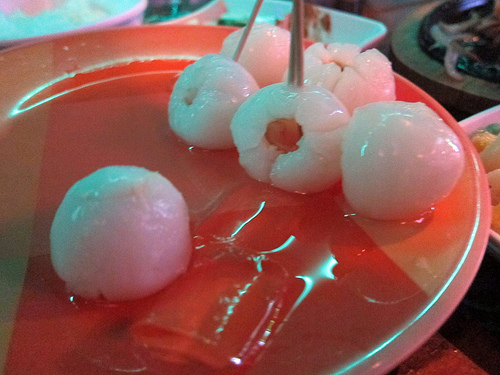 Well, after that bit of adventure, we were given lychees for dessert. And then I went home to have a shot of Jameson.

I absolutely adored the opportunity for this experience but I can’t say I’d do it again. I love Korean food but having endless, unseasoned raw bits was just a bit much. I liked the cooked food a lot more and of course you can’t go wrong with liver. So the next time someone suggests  live octopus, silkworm or sea snake for dinner I can politely decline their offer out.

Join the Gastronauts, an adventurous eating club! I hear more daring dinners are in the works.

4 thoughts on “Eating Live Seafood at Wassada with the Gastronauts”