People tend to imagine the UK as the place for warm beer and your best bet is to get wine while on vacation there. I tended towards cider however if I found myself at a pub. However, from my research, there was a strong cocktail scene in London. In fact, some may not know craft cocktail bars may have originated from Europe (Paris and London) and spread to New York and to the rest of the States. Of course, this is all highly debatable as which bar was the first bar in recent history to serve “pre-Prohibition”, Speakeasy type or new, creative cocktails. I do know I’ve been hearing great things about Parisian bars long before I heard about NYC bars.

So, I made a list and though it was longer than my arm, I only made it to three craft cocktail bars. Actually, I went to four on that list but after getting there, I discovered it wasn’t really a craft cocktail bar.

Our first stop was the private members’ only bar Jubjub inside the Callooh Callay. After finessing our way through the thick crowd, up the stairs and past the velvet curtains, we encountered a locked door. Members are given keys after they’re accepted. As guests, we were led in by a hostess.

While Jubjub can make  you any drink you like, they strongly advise you stick to the list which changes every week. I had the Sun Also Rises as my first cocktail. I’ve been on a sherry kick lately and this one featured Tio Pepe fino sherry, Dubonnet, absinthe and bitters.

I tasted my friend’s Vanilla Ice (Four Roses bourbon, Averna, Coconut water, vanilla syrup, bitters) which initially I was wary of. It sounded incredibly too sweet but Averna actually helped cut it and turned out to be a very nice cocktail.

Thymes They Are A-Changing

I love any cocktails with thyme and this Thymes They Are A-Changing was a great one with rum, Galliano Autentico, lime, sugar. It was described as an herbaceous take on a daquiri. 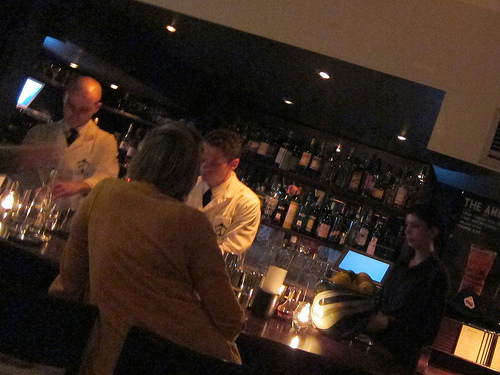 69 Colebrooke Row was probably the cocktail bar I most wanted to go to. I’ve been traveling the States in search of aged cocktails, having my first one at Clyde Common in Portland, Oregon. Jeffrey Morgenthaler, the bar manager there had an aged cocktail at 69 Colebrooke and was inspired to create his own (in whiskey barrels as opposed to glass bottles at 69 Colebrooke).

When I first looked at the menu, I didn’t find the aged cocktail list I thought I’d immediately recognize. Our server went to get a bartender to help me. It turns out the only aged cocktail they had at that time was a Manhattan (Buffalo Trace bourbon, Martini & Ross vermouth, Angostura bitters) and it was listed as a “vintage” cocktail. It was around 14.5 pounds which is quite a lot of money (over $22!)  and they apologized for it (average price there was around 8.5 pounds). I got it anyway. It was quite smooth and though the  menu said it was aged 6 months, the bartender said this had been aged for over a year. I didn’t really taste anything magical. Perhaps my bartender in Vegas is right, [the trend of] aged cocktails are over.  It’s probably not going to stop me from trying the aged cocktails in LA though. I still have to compare it to the SF aged cocktail I had. 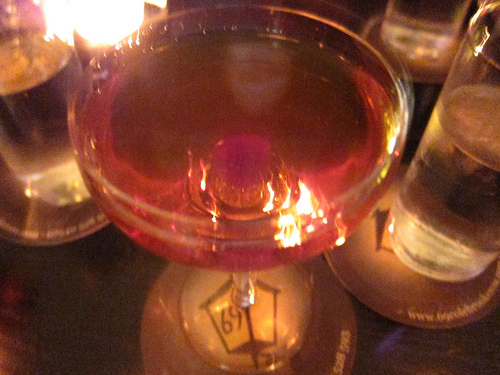 For kicks and giggles, I ordered a freshly made Manhattan. It was extremely good and there wasn’t much reason to want to try another vintage Manhattan. To be fair, the bartender did say they used to have a great vintage El Presidente while the Manhattan was less good.

Overall, I found my experience all right. I would have preferred to sit at the bar to gab with the bartenders but alas, we were stuck at a table listening to the couple next to us who were obviously in the middle of an interesting date.

I did taste Kigo which was featured in one of the drinks. It turned out to be a very strong shochu. My friends had great drinks including some lovely champagne cocktails. The vibe was more of a locals bar rather than an uptight craft cocktail bar. I liked how friendly everyone was. 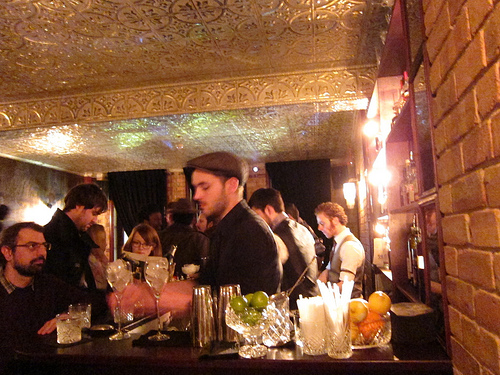 My favorite craft cocktail bar I found on this London trip was the Experimental Cocktail Club. ECC started in Paris and this London branch was very popular. After locating the door in Chinatown (there is no signage), we went upstairs. There are two levels where you can hang out and we chose the upper floor.

Again, I longed to be at the bar but this one was particularly slammed and we were lucky to have gotten seats (we booked ahead but they had lost the booking– which is fine since they reserve half the space for walk-ins). I decided to try the Jamaican Pogo (rum, green Chartreuse, homemade smoked pineapple syrup, lime and Jamaican jerk spicy bitters).

I really enjoyed tasting my friend’s Old Cuban (rum, lime, ginger, mint, champagne and bitters) but decided to get the Negroni de Provence (lavender infused gin, herbs de Provence infused Lillet Blanc, suze) to see how they tweaked the classic.There may have been too many infusions in this cocktail.

While all the drinks I had at Jubjub and 69 Colebrook were good, I found myself liking the vibe of ECC more.