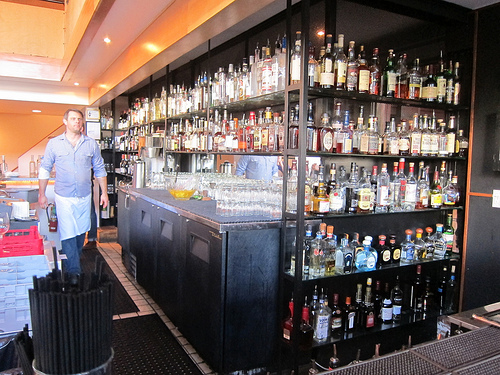 I spent a couple of different days at Clyde Common while I was in Portland for Portland Cocktail Week. First, I trooped in with some new friends after the DonQ Yacht Rock party.

I’ve been to Clyde Common before and was glad to see it was a little less busy that night. I was able to find a barstool to enjoy my drinks.

I thought it was super cool to see others like Todd Richman of Sidney Frank Importing (whom I just had a cocktail from when he guest bartended at Beaker & Flask earlier in the night) and Tony Conigliaro. I had taken Tony’s seminar earlier in the day about the martini. But what tickled me so much was the fact Tony Conigliaro is acknowledged to be the first to bring aging cocktails to life. He does it with glass containers and Jeffrey Morgenthaler was so inspired after his trip to Tony’s bar 69 Colebrooke Row in London, he came back and started doing barrel-aged cocktails.

And so I got an aged Red Hook to start. I love Red Hooks anyway and this one was just smooth as can be. Very mellow, very easy to sip.

I also had one of Jeffrey’s new carbonated cocktails. He explains the process here on his blog. I had the Bicyclette while everyone raved about the Aperol Spritz. It was nice to continue the fizzy theme since a kind stranger also got us bubbly to share.

On my last day in Portland, I had been drinking for approximately a week straight for about 12 hours or more daily. So why not close out with a happy hour before the flight? We stopped into Clyde Common where H.C. of LA-OC Foodventures had the daily punch and I had the BMOC. 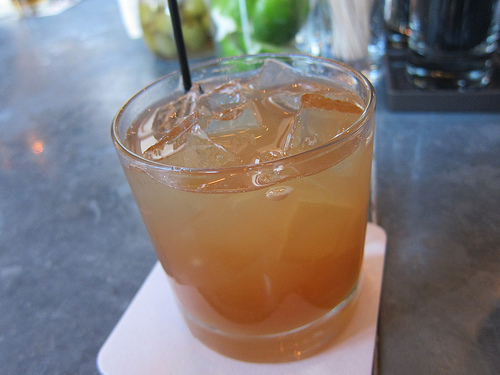 B.M.O.C. – bourbon, raw ginger syrup, Angostura bitters, soda water. I had to laugh because it was a cocktail I had last year while at Clyde Common but that ginger syrup is just so good. I probably should have tried the Bourbon Renewal (Maker’s Mark, lemon, cassis, bitters) but I was still remembering the evening before at the Maker’s Mark party at Ground Kontrol. 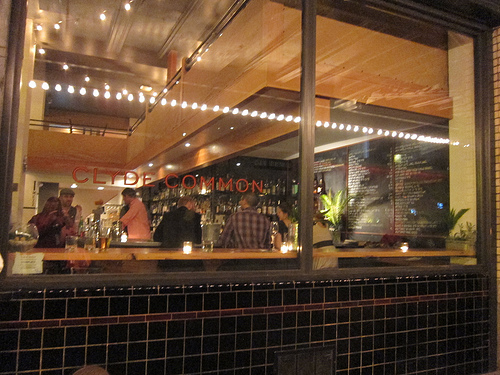 One of these days, I’ll have to have the food at Clyde Common. It all looks so good.