Let’s go on a bar crawl! Here are some of the bars I checked out when I was last in Portland, Oregon. First up is Pepe Le Moko which opened a few years ago. It’s the sister bar of Clyde Common. The list of classics is curated by PDX’s best barman, Jeffrey Morgenthaler.

I’ve heard much mention of the amaretto sour and grasshopper at Pepe Le Moko over the years. I decided to go for the sour as that was my drink of choice post college (possibly also while in college).

This is a very good, very grown-up version of what I used to drink. The whiskey really helps balance the sweetness of the amaretto.

I also tried a Toronto while I was there. I hadn’t had one in a while so it was nice to sip on that while admiring the small space that was carved out for the bar. This is one of those intimate spots great for a date.

And since I was in the building, I popped upstairs to see Jeffrey at Clyde Common. One of these days, I’ll have to actually eat there! I later asked Jefferey where should I go next and he said his favorite was the Highland Stillhouse out in Oregon City but I should also check out Pink Rabbit and Hey Love. So I headed off to Pink Rabbit which is just up the street from Pepe Le Moko and Clyde Common.

I immediately fell in love with Pink Rabbit. I loved the decor and I wished I was hungry because I would have ordered half the menu. It’s my favorite kind of spot- cocktail bar meets Asian food.

The Solid Gold is Pink Rabbit’s version of a Queen’s Park Swizzle, which is one of my favorite drinks. I do love any drinks with mint! And rum. 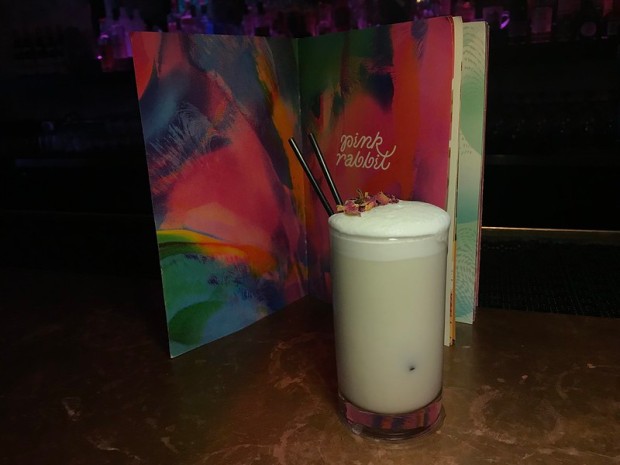 Next I had the Rosy Minded Fizz which is Pink Rabbit’s version of a gin fizz. I love a good fizz. I don’t usually order Ramos Gin Fizzes because they are so time consuming to make but if I see a gin fizz on a menu, I will order it! This one was delicious.

On the next night, I dropped into Deadshot. It was a relatively quiet night – some big game was on TV and they don’t have televisions there. Better for me and something to keep in mind if you’re looking for a spot to catch up with friends.

Headed up by another great Portland bartender, Adam Robinson, I had a couple of drinks. I’m pretty sure I have these in the right order but possibly not… In any case, I LOVED the drink in the mini barrel. I don’t usually order Rum Barrels at tiki bars so I don’t usually get to have things in mini barrels. It’s just so cute (and yes, Instagram-friendly).

Although I was trying to keep to a one and done policy for this bar crawl, it was turning into a “two and maybe one more…” sort of bar crawl. For my next drink, I got the Deadfast which I see has morphed through the years Deadshot has been open. I like that- a seasonal yet familiar drink.

*  drinks have changed since I was there! Go check ’em out for the new drinks– Deadfast (version 3) sounds great! 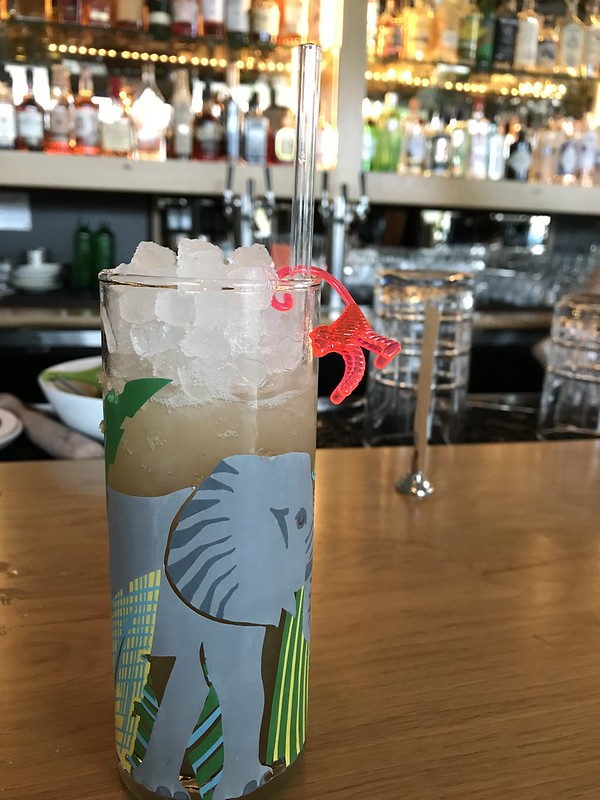 On my last night in Portland, I finally checked out the bar at my hotel, Hey Love.

In the lobby, I had the Pink Feather. I was immediately attracted to the bourbon drink because of the guava and macadamia orgeat. I really liked it and wished there was more (mine seemed a little short poured…). I noticed everyone else were ordering Aperol spritzes. 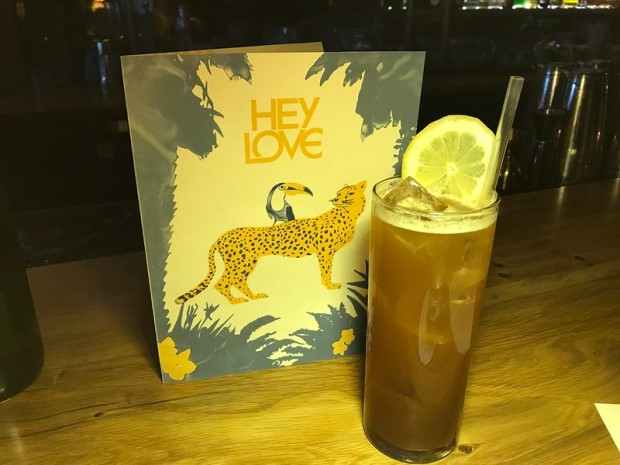 Initially I sat in the lobby until I noticed all the folks were in the huge bar to the left of that bar. Oohhh, I must go check it out. It was packed at the next bar and do you know how hard it is to take a decent photo when you’re trying to keep an eye out for an open bar stool? No, well, this is the result of the hurried pic. But hey, you can imagine how great it taste inside the “jungle” part of the bar.

It’s the same menu here so I got the Belafonte. While I enjoyed the music, dark leafy decor, friendly bartenders, I was trying to figure out what made this bar everyone’s favorite bar. I heard from multiple people to check it out. Maybe I needed to spend more time at Hey Love but I wanted to head out since I had a flight to catch the next day. Next time!

Hey Love at Jupiter NEXT Hotel