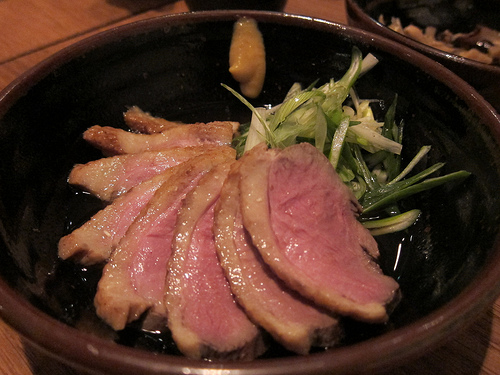 For St. Patrick’s day this year… I had udon. This wasn’t supposed to be the plan. Earlier in the day, we grabbed a wonderful lunch at Spuntino and was planning on Hawksmoor for dinner which is supposedly a wonderful steakhouse with promising burgers at the bar. Our plans had to be remade when we dropped by and was told the wait would have been an hour. No problem. Then they called to offer us seating in the main dining room. Except they don’t serve the bar menu there (this is according to the conversation with the hostess but since then, a friend mentioned that is NOT the case). We kept waiting and then we got another phone call saying the wait was now an additional hour and half. We had already waited an hour and this was quite unacceptable. We decided to hurry over to Koya, an udon shop known for their hand-made udon.

Strangely enough, the owner of Spuntino has been quoted saying he loves Koya and I had been carrying around a print-out of the article looking for chefs’ favorites. It must have been fate.

Two people really didn’t need three appetizers to start but after the ordeal we just had and the 30 or so minutes wait for Koya, we were starving. We ordered the duck, pork belly and the marinated mushrooms to start.

My friend opted for the hot broth with cold udon as her main bowl of love. I believe she had the beef or more duck…it’s entirely possible I neglected to make a note of it as I was so involved with my bowl of udon.

I chose the smoked mackerel udon, thinking fondly of the smoked eel pasta I had in January in San Francisco. It wasn’t quite the same as well, one’s a fish and one’s eel but more because Koya smoked the saba (mackerel) in a traditional Japanese manner. It was still very good and I loved the mound of fresh veggies.

I know Koya is a fan favorite but to be honest, I’m more of a ramen girl. It was still nice though to have a bowl of steaming noodles on a cool evening, after having your heart broken by a restaurant.