Geeking Out to Gaga

Last weekend, the gay boyfriend threw a party to watch the Gaga HBO special. He requested my Christmas sangria, aka the XXX (for triple booze) sangria. I didn’t have time to soak some of the fruit in booze so it was really a modified XX Gaga sangria. We joked about blood ice cubes and serving out of cups made of meat but considering there were a couple of vegans in the house, I don’t think that would have gone over very well. I fretted the sangria didn’t have enough time to “sangria-ify” (meld) but everyone claimed it tasted great. It’s really about the diversion (cinnamon garnish) and extra rum that made everyone agreeable.

What I was really drinking

While people enjoyed the four pitchers of sangria I made, I was drinking a little bourbon with a splash of vermouth and rounded out with sparkling clementine. Oddly, it tasted nutty. I liked it. Yeah, that’s Trader Joe’s bourbon, Rebel Yell. It’s not too bad.

This post is really about what we ate and drank rather than Gaga herself. We know enough her, right? I think it’s more interesting to see what people bring to the party. This Praline (pecan liqueur) was tasty, just like butter pecan ice cream. I probably only serve it over ice cream. I didn’t have anything to mix it with but I can imagine doing something like a White Russian with it except I veer away from drinks like that.

The American Honey is bourbon from the folks Wild Turkey. This I liked on the rocks.

Besides the caprese salad, we also had a (vegan) salad with an addition of diced baked tofu.

Someone brought mac and cheese. This is based on Joan’s on Third’s recipe although the person said they added more gouda. It was surprisingly light and creamy, just the way I like mac and cheese. 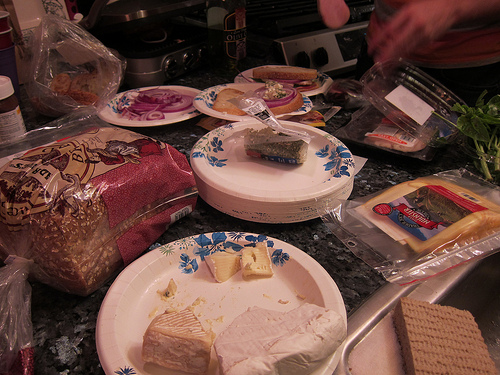 Everyone got to make their own panini. I chose ham, goat cheese, basil and red onion.

assembled panini ready for the grill

After assembling, sprinkle both sides with a little olive oil. Or you can brush with butter.

Let the panini hang out until crisp and the cheese has melted.

And voila, a ham panini

That thing was gone in…wait, can you count in micro seconds? Too bad I was too full to try some other fun combination. Maybe turkey with cheddar and sliced green apple next time.

Oh and dessert? They were homemade cupcakes topped with homemade candy and lots of pizazz. The candy pieces looked like “sh!t Gaga would wear.” Rock on, sistah!

I love a good house party. Sometimes it’s nice to make your own food and drinks.