Photographing the New Menu at A-Frame

I was invited a couple of weeks ago to A-Frame for a friends & family lunch. They’re introducing new menu items for both lunch and dinner. Also part of the fun was being photographed and watching a professional photographer work. 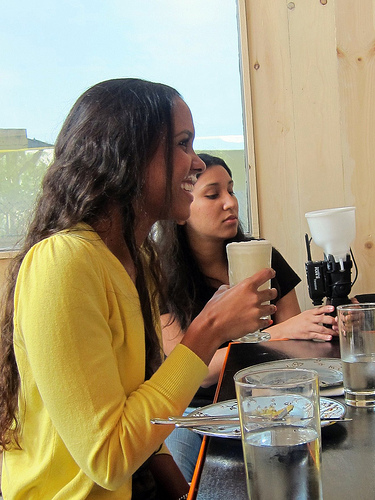 As the food came out, it was first photographed by the professional then we dug in. There was an art director who instructed us how to pass the food, how to hold glasses and more. In the above photo, fizz from the Ramos Fizz made a great photo on the participant’s upper lips. It was like watching a Got Milk? commercial come to life.

I really enjoyed being “behind-the-scenes” at this shoot. Styling Food is fascinating to me.

As a nod to the former IHOP space, A-Frame has a Breakfast Plate with fried eggs, bacon, thick sliced grilled toast, sweet potato hash. The bacon is Benton’s which made the table swoon. It really is the best bacon. And I liked the sweet potato hash.

I got to photograph the blueberry pancakes after a few bites have been taken out of ’em. Imagine rich and moist pancakes versus thin dry ones. I may be converted to pancakes soon after all. 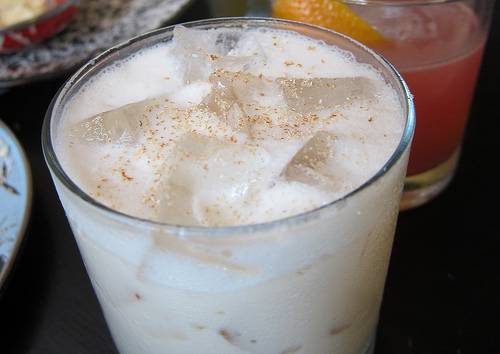 Having never been for brunch before, I didn’t realize A-Frame had a separate cocktail menu for lunch. I tasted quite a few cocktails but our faves were the Ramos Fizz, Mai Tai and Milk Punch. The cocktails during brunch seemed to be more classics-driven. This is not to say the Mainland Sour and Old Brasilian weren’t tasty. But then another slew of drinks came by.** Ingredients to follow at the end of the post.

Moving on to the new items on the dinner menu, we tried the sesame leaf wrapped shrimp tempura. Chef Roy was inspired by the use of sesame leaves while on a trip to Australia. 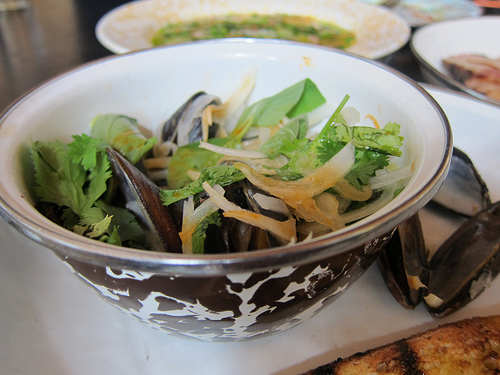 PEI mussels were served in a coconut milk, bacon and Maui onion broth. Did I already mention I love this Benton’s bacon? 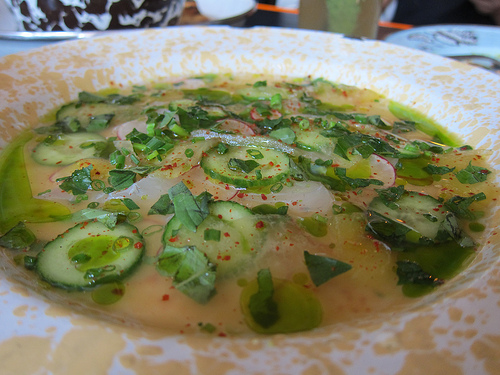 Like the pancakes, I got the crab cakes a bit late. I did manage to get a shot of how the crab cakes should be eaten- with lettuce! Dunk ’em in the provided sauce and you’re good to go. I also liked the cured striped bass.

I’ve been intrigued about the knuckle sandwich for a while. It’s oxtail or tendon that you scoop onto bread, sprinkle on seasoning and herbs and spoon on chile soy sauce.   It’s a bit of a take on bone marrow. Imagine savory meaty flavor with the lightness of tendon. 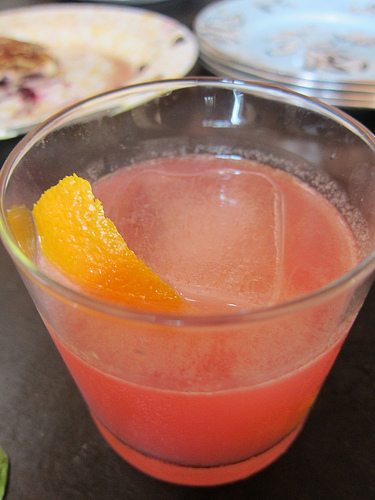 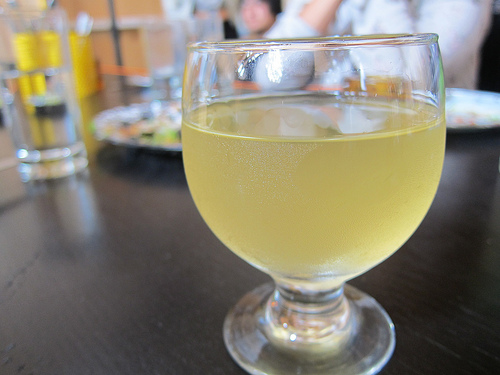 Don’t forget A-Frame also serves wine and beer. The table liked the refreshing chenin blanc with our meal. One person loved the Czechelada so much, he actively promoted it over the others but for this round I liked the Rickshaw. If you’re into tequila or mezcal, try either the Finer Print or Trick. 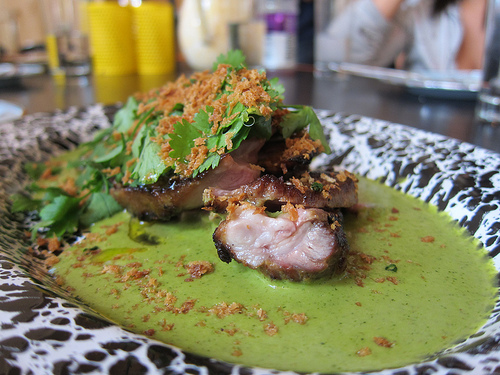 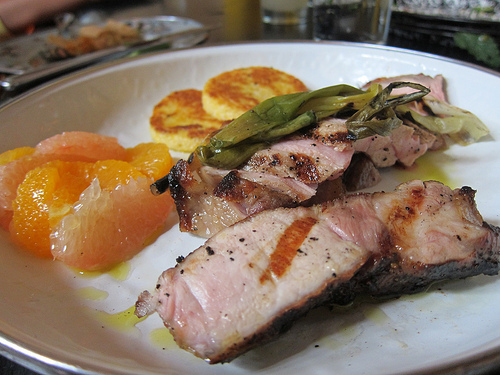 For the meat fans, choose from the roasted lamb or the grilled Berkshire pork chop. Despite being full from all the bites here and there, I still managed to stuff down a piece of each. I really liked the Berkshire pork chop. It’s so…porky. This is what I imagine all pork should taste like.

To be honest, I probably wouldn’t have ever ordered the banana bacon cream pie. Not that I don’t like banana or bacon for that matter but a cream pie? I feared fluff but the dessert is much denser than I would have imagined for a cream pie. Also, you know how I’ve been raving about Benton’s bacon. Yeah, it’s that BACON! It makes everything so, so good. It’s possibly my new favorite dessert or at least my new fave in Culver City.

The day was pretty neat. I thought it was really fun to see “behind the scenes” and perhaps end up on the website soon. Thank goodness for bokeh.

7 thoughts on “Photographing the New Menu at A-Frame”