I’ve been meaning to check out the Blind Barber, a new bar in Culver City, for a while now. And when I tasted the drinks from their booth at the Angeleno Live & Dine event, I knew I had to go sooner than later.

There is no sign. You find the barber shop and confidently go to the unmarked door at the back of the storefront and push yourself into a dark speakeasy style bar. My friend loved her Strawberry Fields (Stoli vodka, lemon, strawberries, parsley) from the Angeleno event that she decided to try it at the bar.

I decided to get the Sweeney Todd (Jameson, lemon, honey, egg whites, Creole bitters).  I had pretty high hopes for this drink but it just tasted a bit watery. I hadn’t expected it to be in a tall glass. I would have liked this served up in a coupe. Basically I thought it’d be more of a whiskey sour. 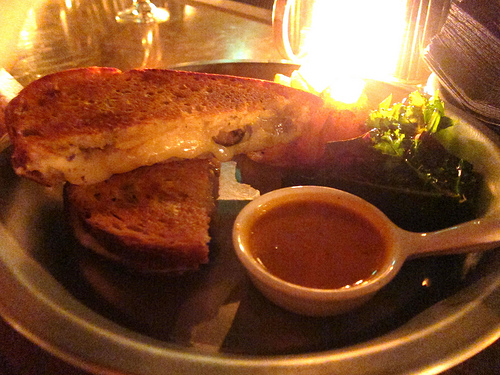 We had deliberately lightly snacked at Corner Door so we could try one of the grilled cheese sandwiches we heard were good at Blind Barber. We got the Taleggio, Hen of the Woods and Shitake grilled cheese with aged truffle oil. The bread was rosemary olive oil bread. It was quite tasty with the tiniest bit of kale salad and itty bitty tomato soup. It was really more for dipping.

Nothing else on the menu really caught my eye. A friend who frequents Blind Barber suggested I try Ma Dukes (Milagro reposado tequila, blackberries, lemongrass, basil), one of her favorites. It was absolutely too sweet and I sent it back. I rarely send back drinks but I can’t drink sugar bombs. From the ingredients, it sounded pretty amazing but they need to cut back on the simple syrup or whatever sweetner they’re using. I also thought it’d be nice to introduce a spicy element. 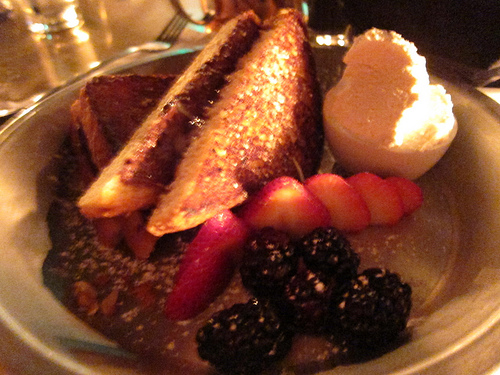 My friend wanted something sweet. I was interested in the Italian rum cake but they were out of it so we went with the Nutella, marscapone and berries dessert. It was like a sweet sandwich using brioche bread.

After I sent back the Ma Dukes, a different bartender asked me what I liked. I promptly told him I liked brown, bitter stirred drinks like a Manhattan. He gave me the Bonnie & Clyde which he said wasn’t on the menu. The only Bonnie & Clyde whiskey drink I know is the one from Blackbird in San Francisco. It didn’t taste like the one I’ve had before– with silver whiskey, chamomile and baked apple bitters but that one was a barrel aged cocktail. This was more like a whiskey sour with a heavy citrus note. I liked it and it was probably the best drink I had that night at Blind Barber.

I’m really glad Culver City has a choice of craft bars to go to and this one is fun with the speakeasy vibe. But for my money, I’m sticking with A-Frame and Corner Door for cocktails. Or Mandrake when I want to feel like a hipster.