SF: Back to Back Sandwiches at Rhea’s & Clancey’s Delis

On my first day in SF last month, I wanted to get a quick bite after my flight (the flight was short but the wait at the airport is interminable!). Carina suggested Rhea’s Deli where she heard they had a remarkable Korean Steak Sandwich. It is very interesting with cheddar cheese. What a marriage of American and Korean food. 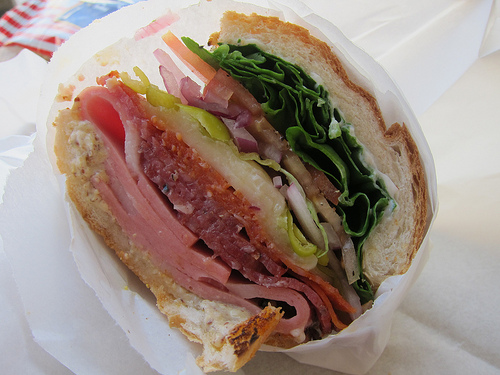 In LA, I love the Godmother at Bay Cities. I was curious to try Rhea’s take on an Italian sub. I already loved it because the bread was outstanding- not too hard (and mouth wrecking like Bay Cities’). While it was very good and used quality meats, I felt it was missing a certain magic. Could it be hot peppers? I’ll have to get those next time to really compare the two.

Before heading over to the Hardly Strictly Bluegrass Festival, we decided to grab a snack from nearby Clancey’s Market. Later we heard all the liquor stores and delis were mobbed so we were glad to go to this relatively new Outer Sunset deli. The owner was friendly and even pointed out his favorite chips but I went with Kettle Chips (New York Cheddar!).

What do you know, I got a heart shaped chip. 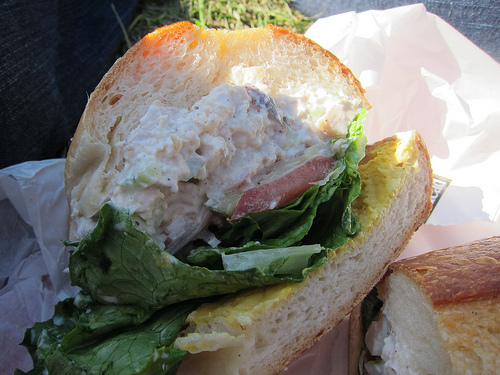 I could hardly finish the first half of my sandwich. It was groaning with chicken salad. Loved that even though it’s made with decadent mayo (when did I start treating this stuff as a stranger?), I have a terrible weakness for chicken salad. I thought the chicken was very fresh and it was the perfect picnic food. And especially so washed down with a vinho verde in the park.