Back in August, Carina and I were driving around and she pointed out Lion Pub to me. Well, she pointed at the building hidden behind climbing plants. She wondered what it was. A few weeks went by and she discovered it was a bar so on my trip a couple of weeks ago, we included it as part of our mini Pacific Heights bar crawl.

Whenever I’m in SF, I tend to drink a lot of pisco and the Pisco Fig called my name. I was intrigued the bartender juiced lemons and limes when people ordered the drinks. I enjoyed my cocktail and debated getting another pisco drink but decided to move on.

It is cash only so be prepared for that and the bartender didn’t encourage us to start tabs, expecting to be paid at the end of each cocktail. Odd but not a bad thing.

Just around the corner and down the street from Lion Pub, we hit up Swank in Laurel Heights. Part of a hotel, the place doesn’t have a permanent feel about it. At first, we thought all the tables were reserved but it turned out there were placards asking patrons to order directly from the bar. I decided on a Manhattan (Woodford, Carpano Antica, Angostura bitters). Ack, they shook it!

Our party wasn’t quite feeling Swank so we moved on. 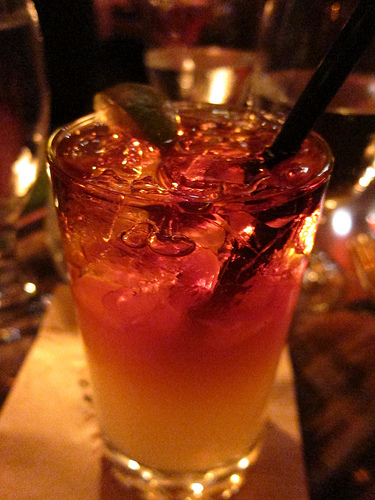 Back in Pacific Heights, we went to grab a bite to eat at Solstice. I had a Dark & Stormy made with Kraken Dark Rum. It was more ginger beer than anything though I was assured maybe I didn’t stir it properly. Well, all right then.

We started with a couple of appetizers for our party of three. I wanted the fish tacos and someone recommended the tuna tartare and mac and cheese. The tuna tartare was quite good with nicely greasy chips to soak up the booze we had been imbibing.

I have been on a mushroom pizza kick so we also got the mushroom pizza. It was pretty good though I did feel the cheese was runny rather than melted. 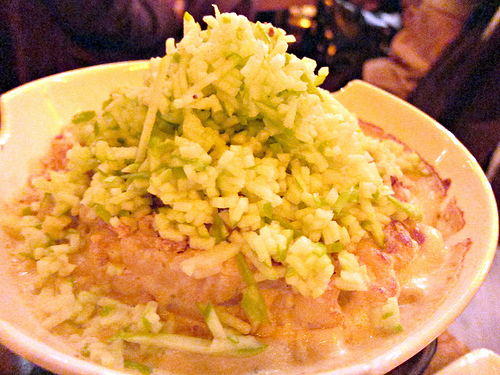 I had the same problem with the cheese for the mac and cheese. While good, it felt “liquid-y.” The green apple was interesting in this but since I am more of a creamy mac and cheese fan and it was already a bit soupy, adding the moisture of the green apple didn’t quite work in my book.

Overall, our mini-bar crawl was the most successful at Lion Pub. I’d go back for happy hour and that great fireplace.

← SF: Back to Back Sandwiches at Rhea’s & Clancey’s Delis
SF: Park Chow →