Trying to figure out where to eat in Napa is a difficult task, especially since it was my first time and I only had a day. When it came down to it, I let the decision to be decided on where we could get a reservation in a relatively short amount of time. Thank goodness for the Open Table app. I saw Morimoto had some openings and we went for it, especially since we heard so much about their lunch specials. 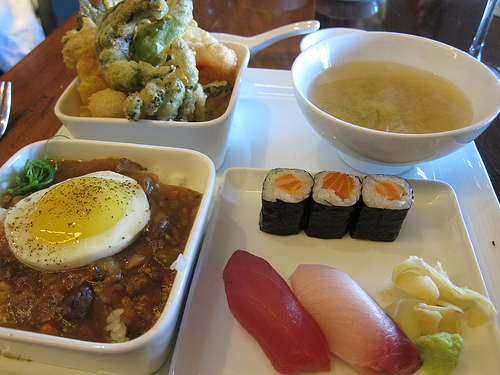 Called lunch sets, Morimoto has a choice of 7 entrees including uni carbonara, black cod, beef teriyaki, pad thai, angry chicken, pork kakuni and loco moto. I was torn between the sea urchin and the loco moto. Our server recommended the moto and Carina had the braised black cod. Oh no, I made the wrong choice.

Accustomed to loco mocos (notably Animal’s foie gras loco moco), I was expecting at least a burger patty but this was more like curry. And tasteless curry at that. The egg was fine but…I started longing for the uni carbonara.

At least my Pisco Lavender Sour (Encanto pisco, creme de violette, citrus juice) was excellent. It was my favorite cocktail of the weekend.

If I were to return, I’d eschew the lunch set and go straight for the foie gras and sushi.