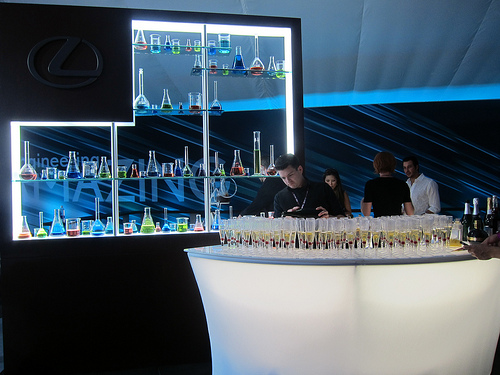 The Lexus Bar at the LAFW Grand Tasting

On the last day of the Los Angeles Food and Wine Festival, I headed back to LA Live to check out the Grand Tasting. Held on the roof of a parking structure, the event was tented with a few booths out in the burning sun. Walking in, I spotted the Lexus Bar and promised I’d come back after snapping a few photos of the booths. I got waylaid and didn’t discover they had this nifty Manhattan-like cocktail until almost the end. 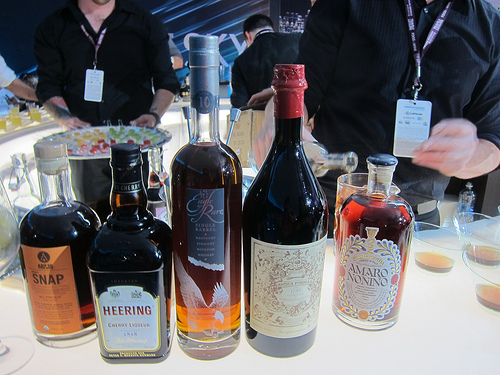 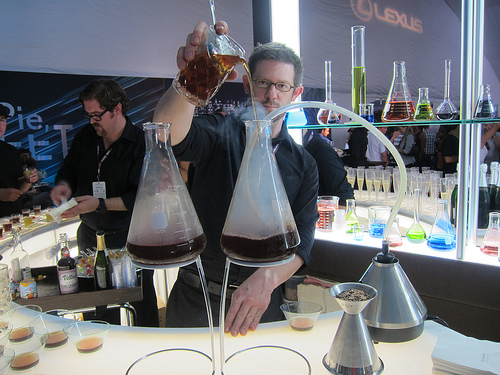 I had missed the cocktails at the Red Carpet so I really enjoyed the inventive look of this rotating bar. The bartenders had a good time joking everyone was drunk before even sipping a single drop. 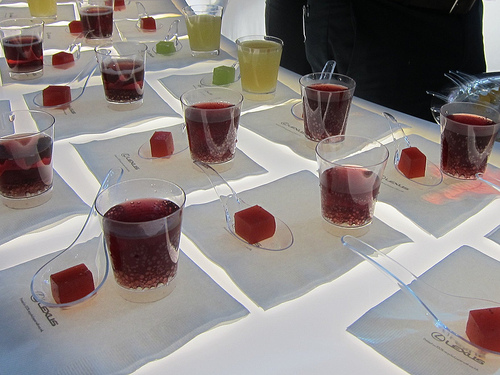 There were jello shots and chasers for those who weren’t into the champagne and whiskey cocktails the bar was doing. 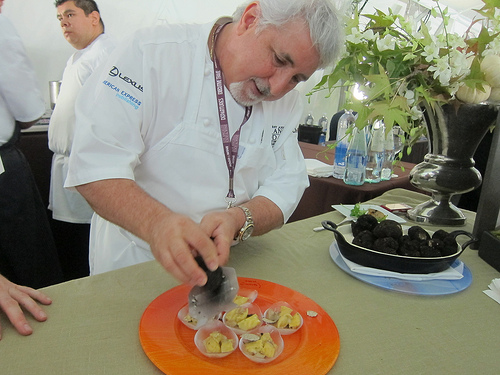 I am always happy when I see Chef Celestino Drago. He was personally shaving truffles onto the boar anglotti Drago Centro brought. 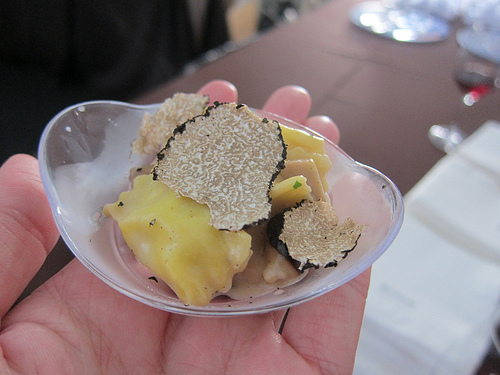 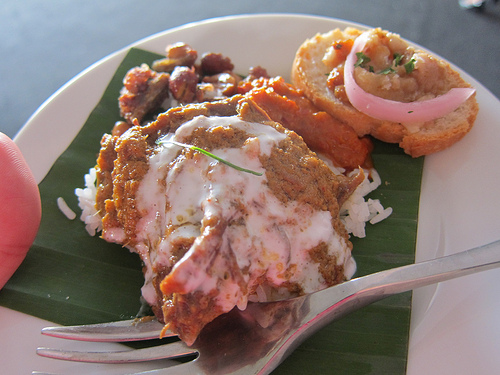 Heading over to the Spice Table booth, I was excited by the tender beef rendang and impressed they brought bone marrow as well. 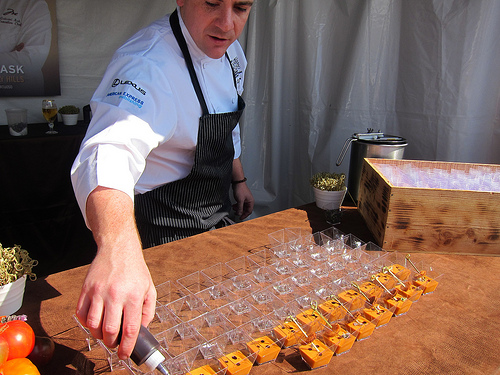 Chef Gabriel Ask from the Montage brought a gazpacho which was very welcome on this scorching day. 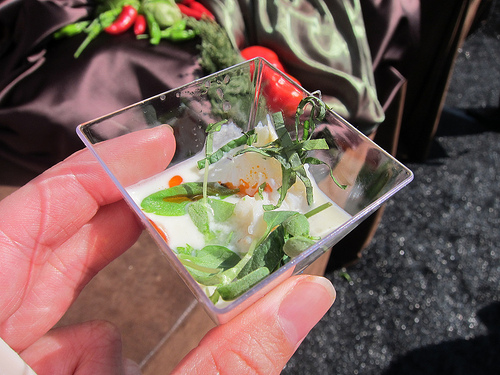 New York’s South Gate with Chef Kerry Heffernan dished out crab and corn soup. It was so good I had seconds. 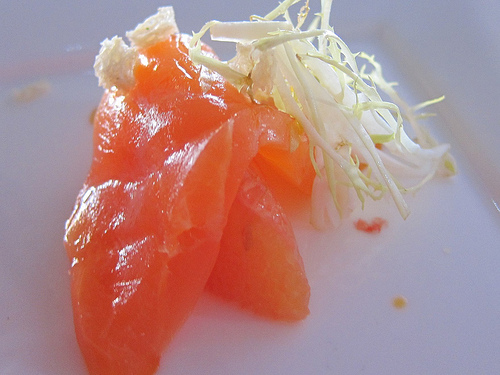 I really admire how Kerry Simon seems to be at every food festival I go to. There he was handing out smoked salmon from LA Market. 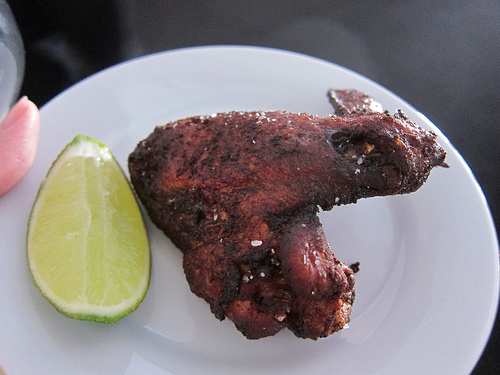 As mentioned, Beechwood will be revamping its menu and changing the concept to a West Indian themed restaurant- think Caribbean, Jamaican, etc. Chef Roy Choi brought Jamaican jerk wings (best eaten with a squeeze of lime) to the fest. The new restaurant is named Sunny Spot. 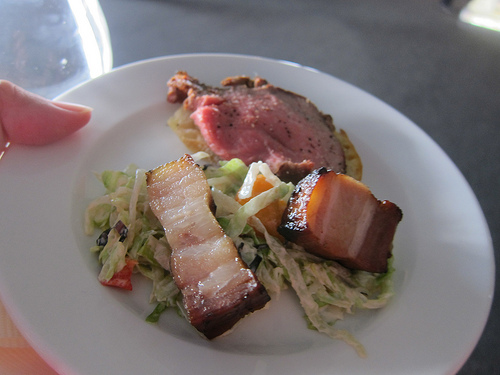 Swinging over to the Hitching Post booth, I tried their pork belly and steak. 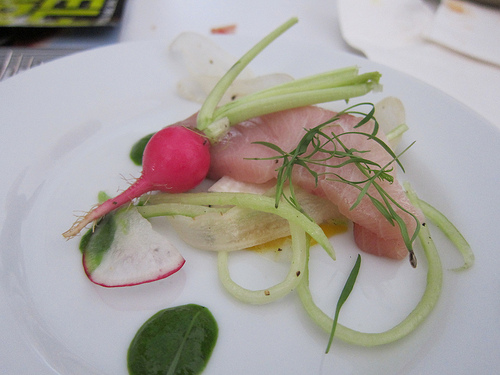 I was slightly confused by all the veggies accompanying the luscious hamachi from Restaurant 1833. It really didn’t need it as it was so fresh. 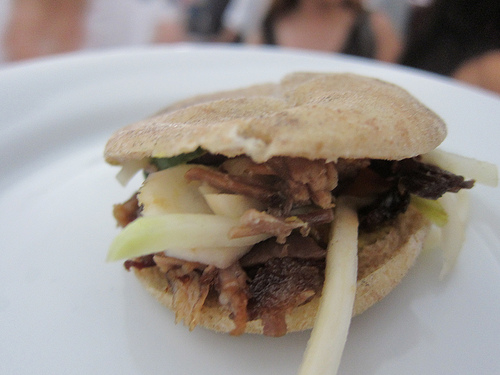 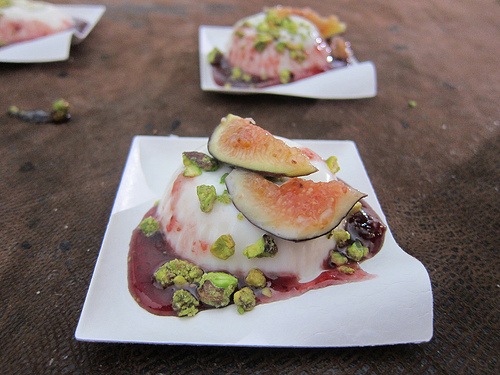 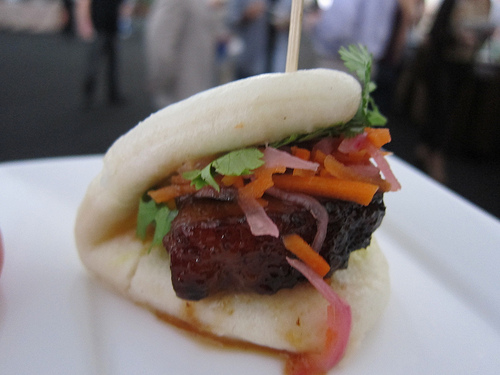 Others joined me and we hit the tables in force. We grabbed nibbles from Mezze, North Fork Table and had a jolly good pork belly bun from Rock Sugar. The pork belly was luscious. I know where to go the next time I’m at the Century City mall with a pork belly craving. 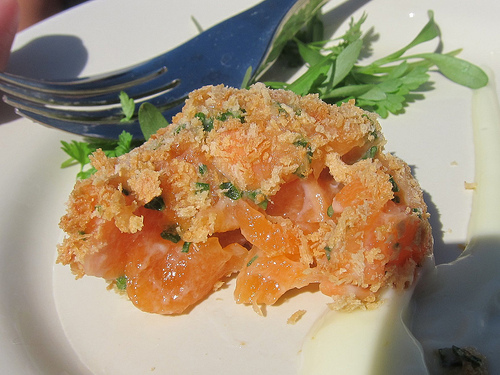 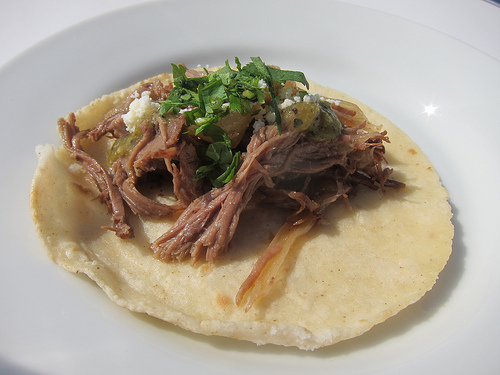 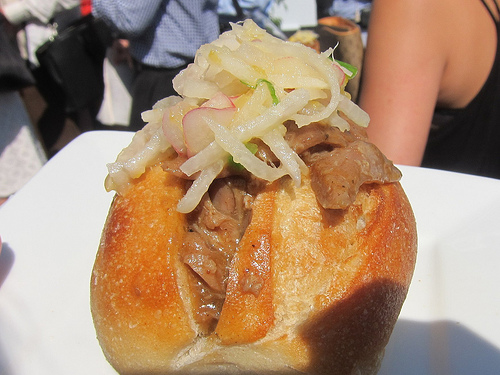 Outside, I tried Chef Nathan Eckhaus’ salmon croquette from South Gate restaurant in New York, the pork taco from Red O while Rick Bayless lingered nearby and the most talked about sandwich of the day, the duck etoufee po boy from Town Hall in San Francisco. 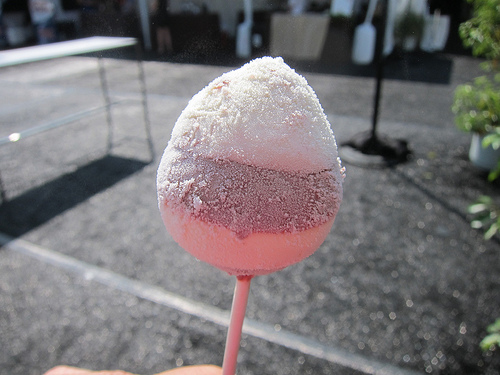 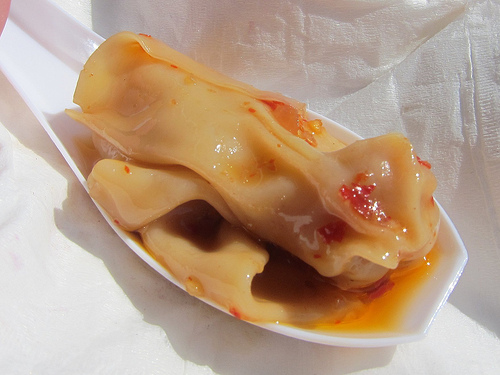 Also outside were the Stefan’s at LA Farm and Slanted Door booths. At Stefan’s, they were serving red wine frozen lollypops. Slanted Door had a fantastic wild gulf shrimp dumpling. 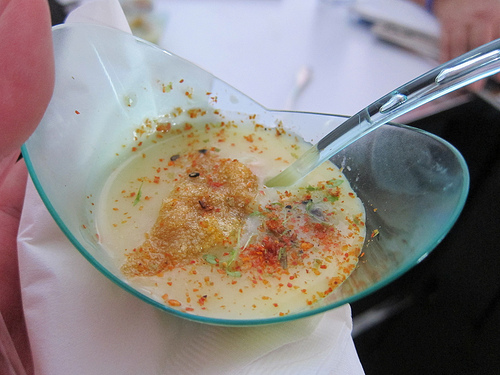 Back inside, I headed over to the Morimoto booth where they were stoically handing out clam chowder. I don’t think they were expecting such hot weather. It was delicious.  A little thin but easier to shoot it if you prefer (I had the tiniest spoon to eat it with though). 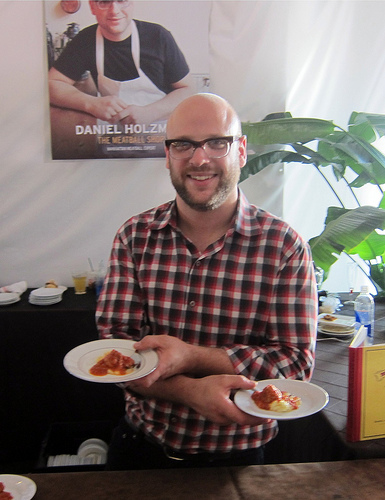 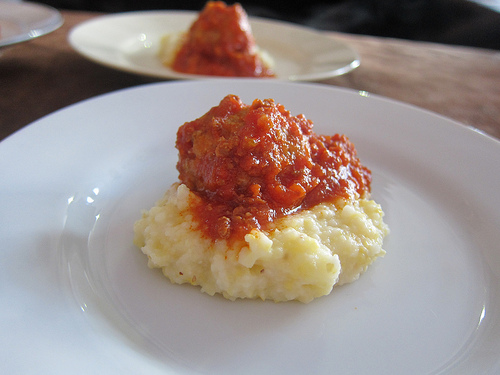 Now I know why everyone raves about the Meatball Shop in New York. This little bite was really good. I had heard it was the crowd favorite and spent some time trying to find this booth but always getting distracted by all the great wines surrounding me. I particularly liked Adelaida and Pali. 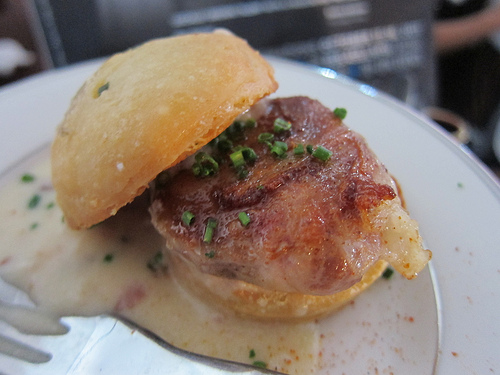 I almost missed the FIG booth but am so glad I found it. The biscuits and gravy were really good. I shouldn’t have been surprised but even the biscuit was great. I hope they serve this at their non-traditional Thanksgiving. On Thanksgiving, Chef Ray Garcia is doing a “Leftovers First” event where guests can choose a la carte items from four categories; turkey, cranberry and stuffing, potatoes and veggies. Available from 12 PM to 8 PM. Menus here. I could go for the turkey pot pie or turkey chili, potato cheddar gratin, potato chorizo empanada, romenesco with hazelnuts and sage, parsnips and cranberry beans with collard greens. FIG is also offering catering so you pick up some extra sides (or maybe the turkey!) for your home celebration. 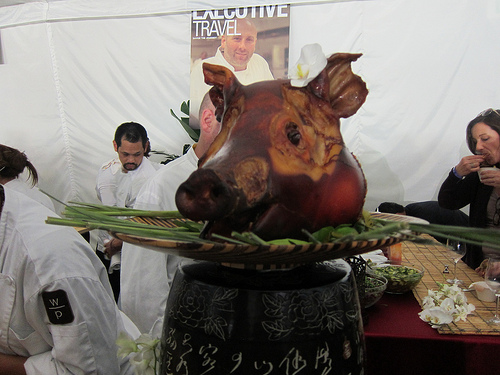 One of the best tastes of the Grand Tasting was the Japanese bouillabase from WP Catering. They also had headcheese. 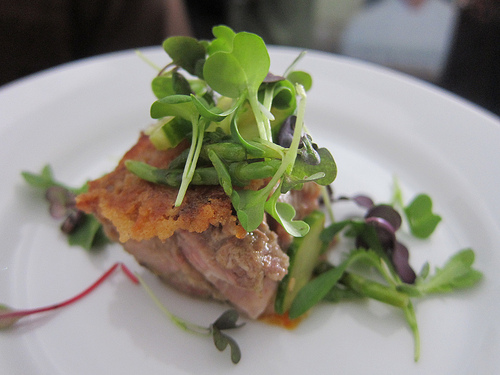 The bouillabasse had grated smoked soy salt and was just amazing with the amount of seafood in it- from the sweet shrimp, hamachi, clams and uni. It was so wonderful I had two.

LAFW‘s first effort was phenomenal and a worthy food festival to attend. It was almost expected though with Chef Wolfgang Puck leading the charge along with Coastal Luxury Management which founded the Pebble Beach Food and Wine.

I can’t wait for next year!