In the last few years, one of my friends from my old dining club and I have been haphazardly pursuing restaurants with cuisines tinged by communism. It’s an odd theme but relatively quirky and fun. I’ve found Eastern European restaurants the most fun but often confusing. And maybe the fun is in the confusion. Years ago, we went to a mediocre Cuban restaurant in Little Tokyo. Unsurprisingly, it didn’t make it and now The Spice Table has taken over the space. 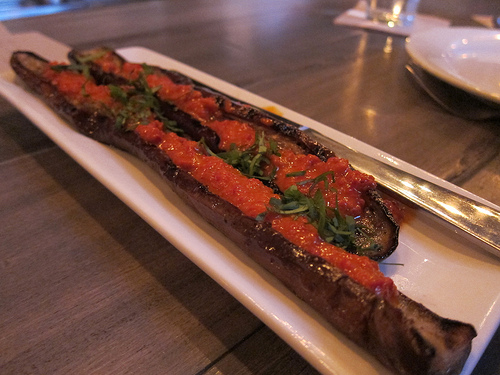 Prior to the remodel, the space was a bit of a maze. It felt like I was sitting in someone’s home. Now, it retained some of its home-like qualities but they’ve made it more open and airy. We grabbed seats in front of the grill where we watched them turn out satays and the like. Owned by a husband and wife team, the menu is described as Singaporean and Vietnamese yet I found it to be a bit more Singaporean.

After numbing my mouth with the chili sauce from the grilled eggplant, I wisely ate the rest of my food without any hot sauce. The lamb belly’s fattiness was quite wonderful to help cool my burning mouth.

We ordered a side of Hainanese rice (without the chicken) and plain jasmine rice to go with the oxtail and short ribs stew. The Hainanese rice went quickly. I did feel the stew could have been more tender but loved the fuzzy squash. I believe this is the fuzzy green Chinese squash my grandmother used to grow when I was a kid so it brought back a lot of memories. The squash was stir-fried with lap cheong, a Chinese sausage and dried shrimp.

Ah, finally, a more Vietnamese-style dish. Well, at$12, this claypot was rather skimpy. Yes, the sauce was great but the fish was a bit dried out. I flash-backed to Starry Kitchen’s version at Test Kitchen which is still my favorite version of this dish. 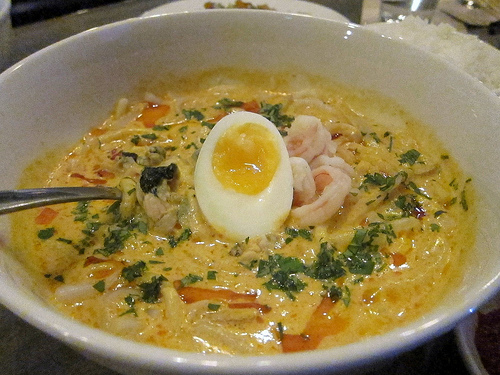 One of the blogger faves in recent posts has been the laksa. And they were right. I loved that the noodles weren’t soggy and there were interesting bits to comb through the bowl.

Overall, I’m glad this spot is in the neighborhood but I have to say my meals at Night + Kitchen and Lukshon were better. I do have to note when I asked the server what his favorites were, we went almost completely opposite of what he said. Is it a case we should have listened to him? I guess I have to go back and order fried cauliflower, yellowtail and kon loh mee (egg noodles with ground pork).

5 thoughts on “DTLA: The Spice Table”