For years I’ve been hearing about Rustic Canyon and how great it is. I was going to go a few months ago but my friend had to postpone. I’m glad we waited until the holidays to check it out as I considered it our special holiday meal. That week was a crazy one. I felt like I was starving all week and by consequence, our meal was really heavy on the carbs this evening.

After hashing out the menu, we decided to get two appetizers, one pasta and two entrees (I told you I was starving that week). We had the crispy white polenta with fried egg and mushrooms. A simple, savory and delicious way to begin. I also had port and tonic since they didn’t have cocktails. Our server said it was great when I was unsure. Rustic Canyon is primarily known as a wine bar but I didn’t feel like wine this evening. Surprisingly, port and tonic went down well.

Next, the pumpkin and farro porridge was a hit. My friend is allergic to pork but she took one for the team and tried to eat around the gobs and gobs of bacon in this dish.

It was probably at this point when I realized I was actually full. But we must soldier on, right? The gnocchi were light and fluffy in texture. The rich rago bolognese sauce complemented the dish very well. 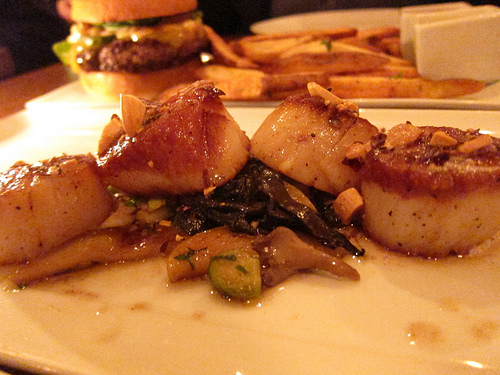 We went crazy for the veggies that came with the seared diver scallops. My friend thought the greens had the texture of cooked green onions. I thought it was velvety smooth like seaweed. The scallops were well-cooked. 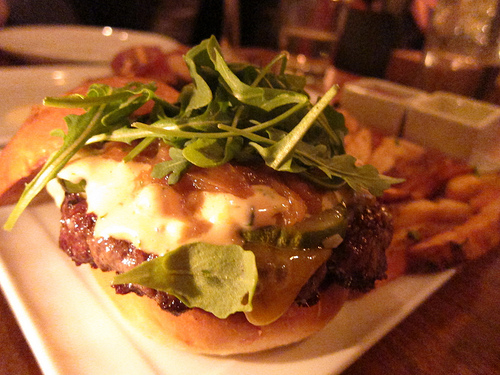 At The Taste: Burgers & Beer event, Rustic Canyon had won the crowd’s hearts and was named the best burger of the night. I was unfortunately, too full to try one so of course we had to order it when we got to the restaurant.

Let’s see, next time I will have to just order the burger. Maybe a veg side. I could barely finish my half of the burger. It was perfectly medium-rare which I like and came with great fries. I should hope so at $18 a burger. Still, I can see why it won the crowd’s favorite last year. I still like Tasting Kitchen’s burger just a bit more (that cheese!) but this is a solid burger.

The restaurant sent out salted caramel and mint chip ice cream for dessert. What a way to finish!

I had a great time and would love to try more on the menu. The fried cauliflower, sprouting broccoli, confit pork belly, whole roasted trout and Berkshire pork chops also sounded great.