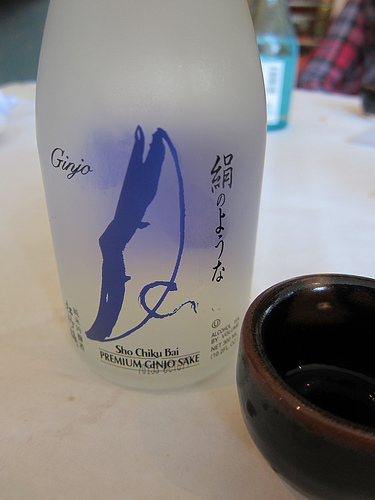 A few weeks ago, I was invited to check out the  new Sai Sai Noodle Bar at the Millennium Biltmore Hotel. Formerly a sushi bar, Sai Sai is now helmed by Executive Chef Thomas Ryan and Chef de Cuisine Jonathan Shin. The two designed the fast casual noodles concept with Chef Jonathan drawing from his background at Nobu and flavors of his childhood. 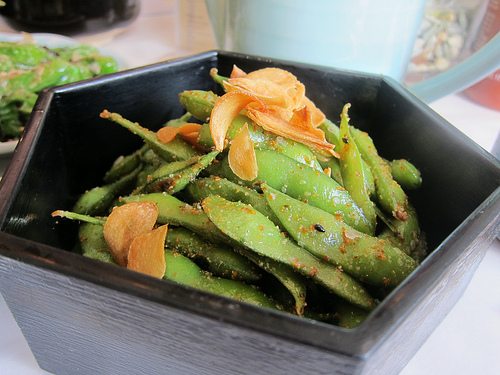 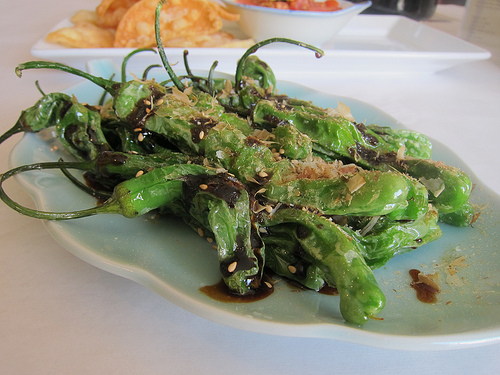 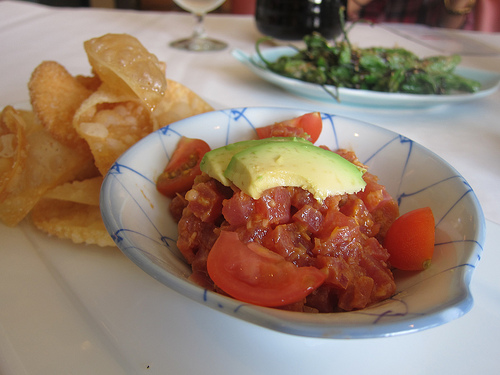 We had a round of appetizers including edamame, shishito peppers and spicy tuna dip. The shishito peppers were a little bit different, instead of just the usual bonito flakes, there’s also unagi (eel) sauce. We had the edamame (soybeans) with shichimi, sea salt and garlic chips. Both were addicting.

The spicy tuna dip was served with wonton chips. I liked that were sliced avocado, wasbizuke (wasabi & sake paste), red onions and tomatoes. It was actually not as spicy as I expected. 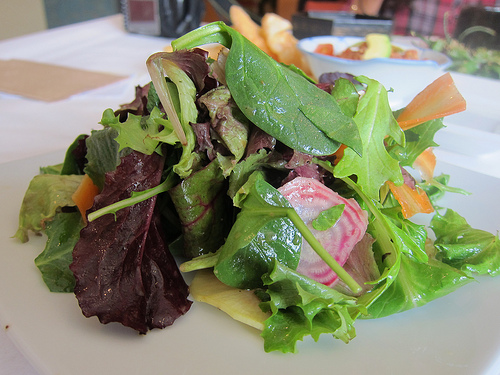 We also had both salads; field greens and mesclin mix. The field greens had thinly sliced root vegetables and a yuzu dressing. I liked it more than the mesclin mix (not shown) which had a wasabi aioli dressing. Mainly because I tend towards vinaigrette style dressings instead of creamy dressings.

Next we were treated to mini portions of a few noodles soups. 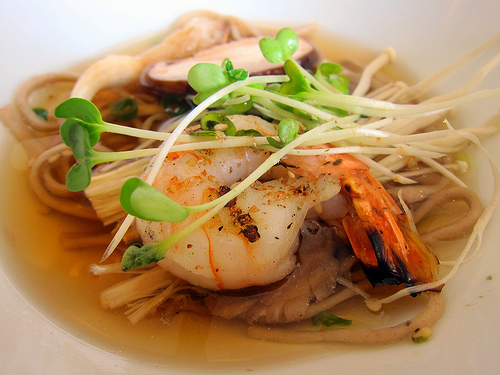 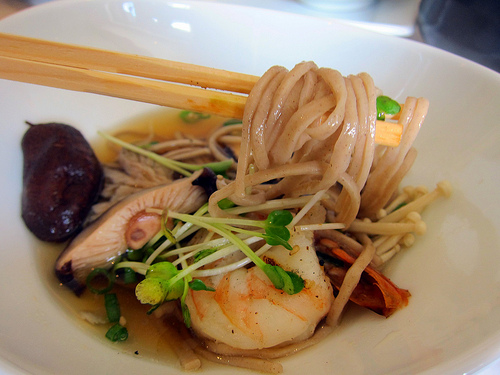 close up on the soba

Chef Jonathan’s toppings are what makes the noodles. For the soba, be sure to add the shrimp. I did like the soy-dashi broth which included enoki, shitake and oyster mushrooms. 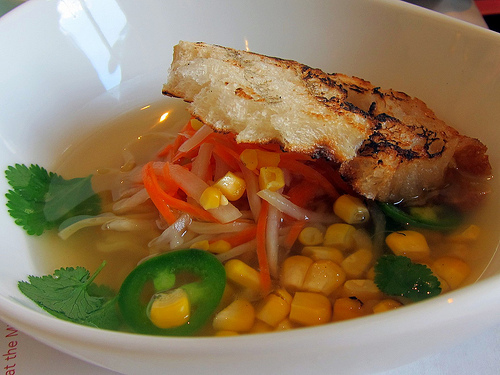 Of the 10 noodles dishes, only one can be made vegetarian. The banh mi ramen is made with a grilled corn and vegetable broth and the pork belly could be removed. The flavors of a traditional banh mi sandwich come to life with pickled carrots and daikon, cilantro oil, jalepenos and topped with grilled ciabatta. 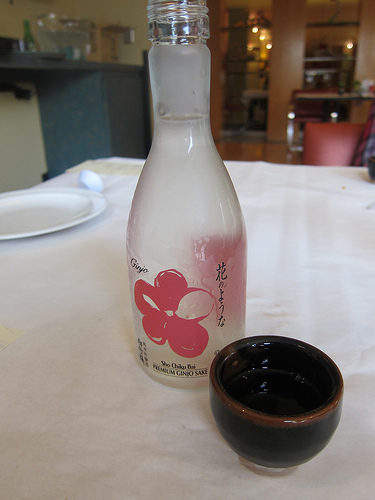 We also did a sake tasting, learning how sake is made and tasted four sakes. Quite a few sakes on Sai Sai’s list are from the US including the Sho Chiku Bai brand. 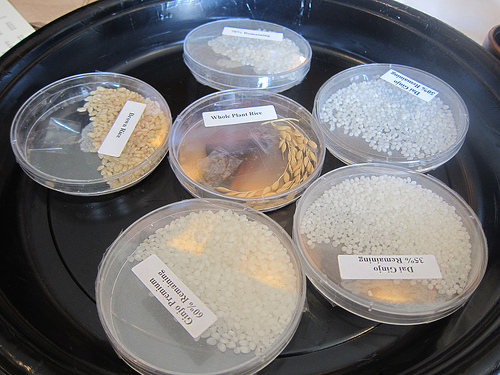 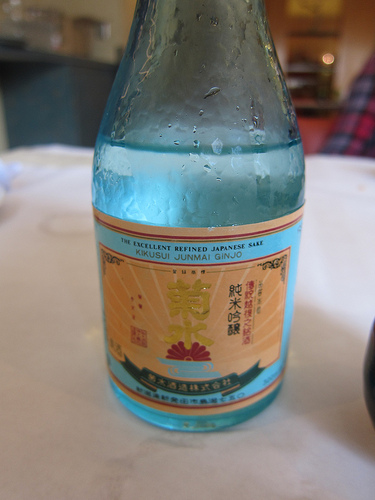 I tend to like junmai sakes so I liked the Kikusui Junmai which is from Japan. 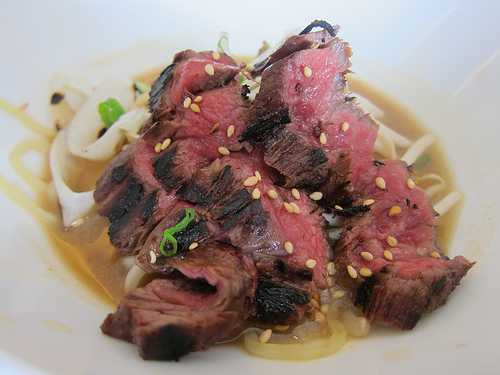 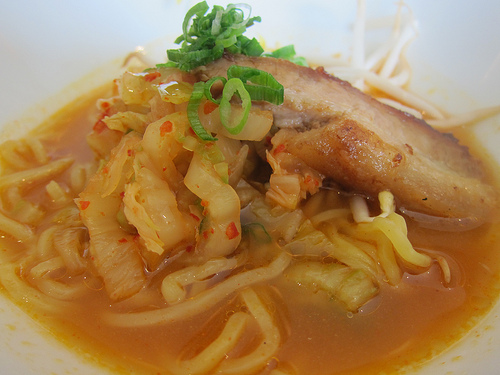 Chef Jonathan’s Korean heritage is evident in the galbi ramen and kimchee ramen. The galbi was utterly tender. He explained the galbi (marinated skirt steak) was marinated with Asian pear, creating the tender meat. And the kimchee is housemade. The stir-fried sliced pork belly is wonderful in this dish. I particularly liked the pork broth which was supposed to be spicy but again I didn’t find it overwhelming. It did have black garlic oil which is considered very healthy (twice the number of antioxidants as regular garlic).

I wonder if Chef Jonathan could be convinced to make an actual banh mi with his galbi or pork belly? Sandwich bar to go with the noodle bar? 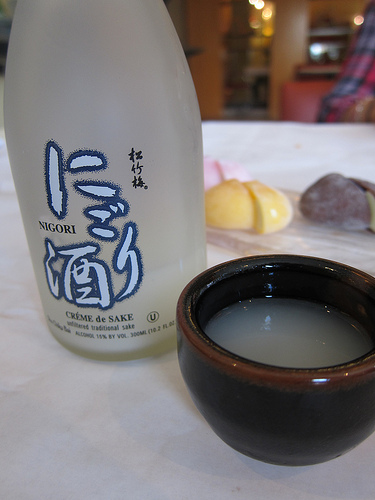 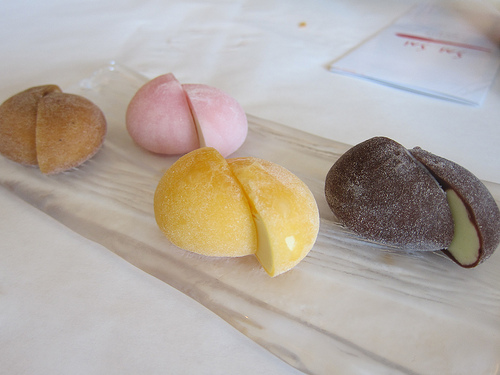 mochi from Bubbies in Hawaii

Sai Sai gets their mochi from Bubbies in Hawaii.  We tried interesting flavors like tiramisu and mint chocolate along with the more familiar strawberry and passionfruit. The mochi skin was so incredibly tender.

Other noodles I’d like to try are the pho with ribeye, the tonkotsu ramen with pork belly, the lobster miso ramen.

Although Sai Sai is part of the Millennium Biltmore Hotel, I would recommend entering the restaurant directly from Olive Street. It can be quite the maze to get to the restaurant from inside the hotel. Check them out for lunch or dinner. Plus they have  happy hour from 3-7PM.