The Los Angeles Brewing Company is now opened. They opened just in time for St. Patrick’s Day and every seat was taken for the 100 taps sports bar. I swung by two days later and despite the impressive number of taps and full bar, they had been clearly overwhelmed. Due to an electrical problem, they weren’t serving food but expected to resume later that week. I’ll have to stop by for lunch another day. 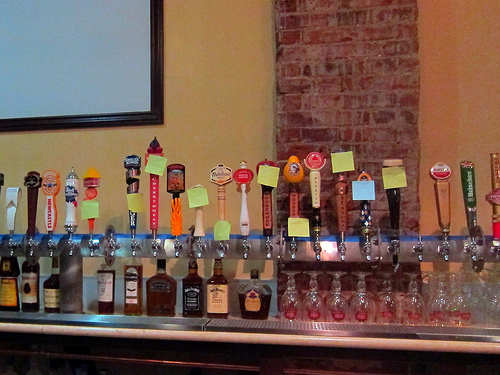 Some of the taps

After tasting a porter, I opted for a gin & tonic. The one I tried tasted like breakfast- filling and very oatmeal-y. I wasn’t quite in the mood for that. I hope when all the taps are going again, I will be able to find something more my speed. Or hey, they do have Pacifico on tap. When we asked why there weren’t more craft breweries on tap, one of the owners said many craft breweries wouldn’t be able to meet the needs of LA Brew Co. Considering the rush during St. Patty’s, it was a legitimate fear. You will find Eagle Rock Brewing Company, Craftsman, Lost Coast and Lagunitas among others.

LA Brewing Company is a DIY dream come true. The former Bank of America building contained tons of marble and old fixtures. The bar has turned that marble into tables for their nearly 400 seat 2-story bar. Going upstairs, we saw the classic interlocked LA design on the banisters. In one nook will be the future home of the DJ booth but next to it could be turned into a cognac room. Some members of my group wanted to see it be a Scotch corner but we’ll see. They’re calling the upstairs bar the “foodie” bar where plans for craft cocktails are in the works. “If you want something with pineapple, this is where it’ll come from.” 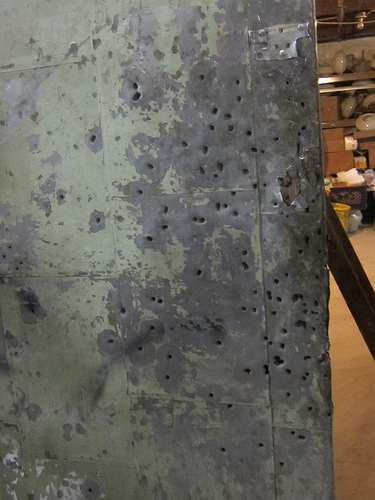 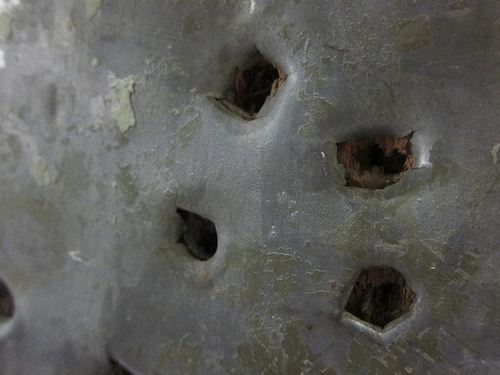 close up on the bullet holes

We got the full tour and after the kitchen, we headed downstairs to the basement. We saw the bullet hole ridden doors and I wondered about them. The bullets had gone through the metal clad wooden doors. This was an old bank. Was there a heist? We saw the safe with the tumbler removed but that probably came long after.

The green couch by the front door may possibly be the largest couch in Downtown L.A. I foresee a lot of photos taken here.

What a great piece of LA history this building is. I hope this independent sports bar makes in in Downtown where it’ll be competing with the Hooters, Big Wang’s and Dublins not to mention all the craft cocktail bars and lounges in the area. But if there’s one thing that is always needed in Downtown, it’s a good lunch spot…and booze.