SGV: Exploring More Than the Beef Roll at 101 Noodle Express 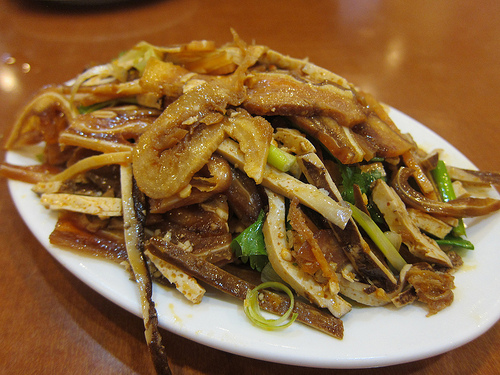 A certain critic in town made 101 Noodle Express famous for their beef roll but they have so much more than that. Let’s take a tour.

We started with the cold appetizer trio of thinly sliced tripe, pig ear and pressed tofu. It had that enigmatic Sichuan peppercorn spice I love so much as after a few bites, my lips and tongue were starting to go a bit  numb.

We could’ve had only ordered the juicy soup dumplings or Xiao Long Bao (XLBs) but I thought we should also get the potstickers.

I asked our server which ones to get and she indicated the first of many panfried dumplings. It turns out she was on the money as these were a bit juicy as well. The wrapper was just a bit thicker than the XLBs. I liked both but I think I rather go with two orders of potstickers. Still, I wouldn’t kick the XLBs out of bed. And I got to watch the most adorable little girl at the next table eat the soup dumplings. She couldn’t have been more than 3 years old and she was daintily wiping her mouth after each bite. Cue the “awwws” now.

I’m still in search of the best dan dan mein in SGV. I know everyone loves Lucky Noodle King which is supposedly the same as the bowl from the old Chaun Yu Noodle Town but it’s just not the same. At 101 Noodle, they served the noodles with cucumber which would be good if they were actually that spicy. Our cold appetizer trio was spicier. I watched my fried add extra chili sauce to her dan dan noodles. I also found the sauce not very peanut-y.

However, we agreed the preserved vegetables and pork noodles soup were awesome.

So the things to get would be the cold appetizer trio, potstickers and preserved vegetables and pork noodle soup. I also hear their oxtail noodles are great. Time to go back just to confirm that report!

← DTLA Lunch: Kagura in Little Tokyo
dineLA Returns January 21 – February 1 / A Look Back at a dineLA Meal at Lukshon →

4 thoughts on “SGV: Exploring More Than the Beef Roll at 101 Noodle Express”