Chicago: Dinner at Girl & The Goat

One of the restaurants I knew I wanted to try in Chicago was Girl & The Goat. After checking out a few restaurants, we decided the best place to be was in the West Loop. There are so many great eateries there including the Goat. I am a big fan of goat. I like goat more than lamb so I knew I was in for a treat.

We arrived on a Friday night and were led to a table by the front window. We had a great view of the street, the mural on the side and my friend who sat facing the restaurant could see just how busy this popular restaurant was.

Our server gave us good advice on what to order and our food came out very promptly. We would have liked to have lingered a bit to savor our meal but we could see it was getting even more crowded despite Little Goat opening across the street. Although, they are entirely different. The diner has well, diner food.

We got oysters to start. These were small, sweet and with a nice mignonette. I really enjoyed the beans plating versus mounds of salt or oyster plates.

We didn’t even realize the kohlrabi salad was one of the signature items. It just sounded good with fennel, roasted shitake mushrooms, gooseberries and almonds. It felt slightly Asian but was so much better than your typical “Chinese” chicken salad.

For cocktails, I chose the Tempest (Zaya rum, house made Falernum, lime, ginger beer). It was a bit sweeter than I would have liked but worked well with the slightly tropical theme of the drink. It’s basically a Dark & Stormy variation with Falernum hence the name.

My friend opted for a rye old fashioned. She said her drink was also on the sweeter side.

When I spotted the sauteed green beans with fish sauce vinaigrette, I was very intrigued. It turns out the vinaigrette was a bit creamier than I had imagined. The cashews added protein but I could have just ate the beans by themselves.

We probably didn’t need the grilled baby octopus but I really wanted to try it since it was done with guanciale (pork jowl), celery root and pistachios. A lemon vinaigrette finished the dish. The result left me longing for a bowl of rice to eat with the sauce. Maybe we should get some bread…

As the name implies, there’s quite a bit of goat on the menu. We decided to go for the heavy hitter, the goat neck which came with goat sausage, cabbage, celery root and blood orange. The flavors were slightly sweet and sour. It was lovely but no way could we even eat a third of this. I did ask for this to go along with bread. I envisioned a nice goat neck sandwich in the morning.

If you like pork feet and oxtail, goat neck was similar in the sense of getting meat out between the linked bones. It was easy though to get the meat out as it was very tender.

The Goat sent out desserts for us. Though we were stuffed, we couldn’t help but to try the bittersweet chocolate. I’m normally a chocolate fan (over fruity desserts) but my heart settled on the pumpkin pie gelato as my love that night.

It was very interesting though with a shitake gastrique and shitake-caramel gelato. 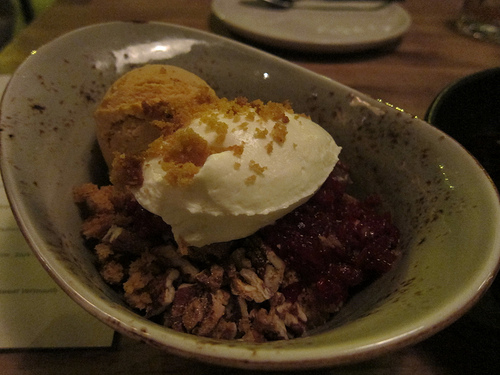 I love spiced cake and the pumpkin pie gelato was perfect with this.

People in Chicago are so lucky to have a goat restaurant!

One thought on “Chicago: Dinner at Girl & The Goat”