The original plan was to go to the Boiling Crab on Main Street in Alhambra. But even after all these years and more locations, the Vietnamese Cajun restaurant was far too busy. I couldn’t wait an hour and half for shrimp so we walked around until we got to Pho 79. Although the name implies it’s just pho noodles, their menu is much more expansive. It’s probably been there for at least 20 years as I seem to recall going there every few years when the hot new places on Main tend to fade away.

We did read the menu with new eyes though. I didn’t want anything as quick as a bowl of pho and saw they offered Bo Bay Mon or 7-courses of beef. I haven’t done this in a while (and I’m still searching for an 8-courses of fish Vietnamese restaurant) and decided I wanted to do that. My seafood-craving friend decided to go with a bowl of seafood noodles soup but agreed to help eat my beef feast.

While scanning the beverage section, I noticed a couple of drinks tagged with “rhum.” I was curious, was this actually rum (or rhum)? But because of my questioning, I think the server thought I was underaged and quickly said they were sold out of the alcoholic drinks. Hmm…

We just went with soy milk and a sour plum drink.

I personally would have gone with my favorite pho dac biet (everything offal-y delicious) or maybe some dry noodles (bun). My friend enjoyed her soupy dinner however.

Seven-courses of beef is $17.95 a person. The amount of food I got for one easily served two. There was raw beef, grilled beef, a variety of beef sausages and beef porridge. You’re given a little hot pot of boiling vinegar and water to cook your raw beef– they called this fondue. You’re also given greens and other veggies to wrap all your food up in. Plus a bowl of hot water to soak the flat rice noodle sheets. I wasn’t given an explanation but figured it out from previous experience. It also seemed logical with the hard noodle sheets and bowl of hot water. 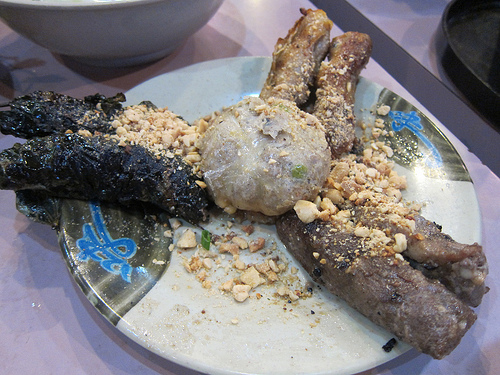 part of the 7 courses of beef

The little round ball as seen in the photo above was essentially a meat cake of vermicelli noodles, mushrooms and beef all wrapped up in an unknown animal product– I’m thinking the same “membrane” as mentioned later. Starting with the lower right-hand corner, were some rolled up beef slices, a sausage stuffed into “membrane” (I’m thinking intestine) and then beef wrapped in betel leaf. All were generously sprinkled with chopped nuts.

I ate all of it the same way— wrapping it in herbs, bean sprouts, lettuce, softened rice paper and then a squeeze of lime before dipping into the provided citrusy sauce.

Eating 6 things of beef the same way made me glad for the bowl of porridge. It was expertly spiced and very satisfying. I finished this while taking home the majority of the grilled beef and sausages home. I probably should have done it the other way around since the porridge would have kept better but there’s no way I could have eaten that much beef in one sitting– though I tried.

The hunt for an 8-courses of fish place is next.