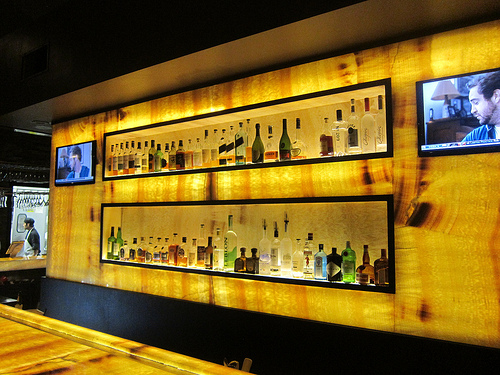 the bar at M Grill

M Grill in Koreatown has been open for about 10 years now but recently renovated and doubled their dining room capacity. I visited for the first time a couple of weeks ago and was surprised I hadn’t heard of it before. There was a time I checked out all the local Brazilian churrascarias with the exception of Fogo de Chao since I thought it was a bit pricier than the rest. M Grill is definitely more affordable. They even offer a happy hour deal where you get a trip to the salad bar and one plate of meal. For the best deal, check them out for lunch. However, some of the best cuts of meat are offered only during dinner such as the beef short ribs, rack of lamb and ribeye.

I spoke to the owner, Manny Kim, who explained that certain Brazilian cuts were hard to come by when you’re competing with the more well-known restaurant across town. These days, he has access to the best cuts since Fogo switched butchers. I found Manny’s story fascinating. He’s Korean but was raised in Brazil from age 1 on. He speaks fluent Brazilian Portuguese, Spanish, Korean and English. Rather perfect for our multi-cultural city.

Initially, I didn’t really take a look at the cocktail list since M Grill features an impressive wine wall. However, one sip of the passionfruit caipirinha made me wonder about the cocktails like Maracana (Leblon cachaca, Larceny bourbon, orange, guarana) and the classic cocktails they listed such as the Manhattan and Pisco Sour. I decided to try the Passionfruit Caipirinha and discovered it was fresh passionfruit which is very nice. I learned M Grill buys the passionfruit when it’s in season and freezes some to use through out the year. They also offer blackberries, lime, pineapple and acai caipirinhas.

The bar is quite lovely and it was great to enjoy Scotch at the end of the meat-intensive meal.

from the salad bar

included in your all-you-can-eat dinner price is the salad bar. I probably could have gone back a few times but I didn’t want to fill up too much. I was pleased by the variety of fresh vegetables that were simply grilled as well as the kale salad. I also loved the marinated veggies like mushrooms and the sundried tomatoes were a nice touch. I avoided the starches but you can get those great Brazilian cheesy poufs and they’re really into beef stroganoff as well.

Next came the easy part. You flip up your card at the table to indicate you’re ready for grilled meats. I tried a number of things including the bacon-wrapped chicken, garlic chicken thighs, parmesan chicken, picanha, lamb, rack of lamb, and so many cuts of steak, it was starting to feel like I ate a cow. I generally chose more medium rare slices.

a selection of meats

I had to get seconds of the sausages. I didn’t realize until after I was full I could have requested chicken hearts.

And when you’re done, just flip your card over to say you’re done. Easy peasy. 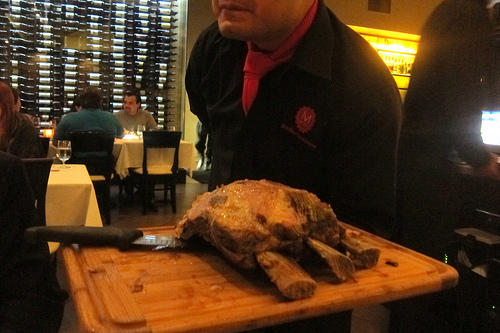 If you ever wanted to be one of the Flintstones, this may be the place to get your giant ribs on. They’ll slice you off a piece or two though I wonder if anyone has ever requested the bone for their doggie. 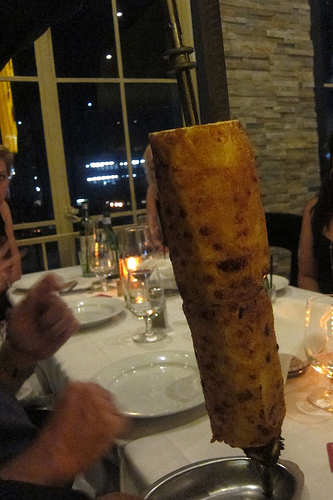 M Grill does a special grilled pineapple. If for some reason a vegetarian is in your party, they can enjoy this and the many vegetarian items from the salad bar. For the rest of us, this was a nice dessert after the rich meal. 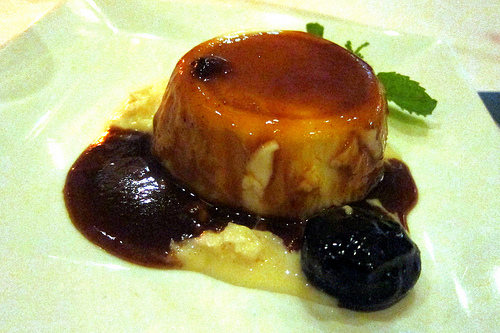 But for those dessert fiends, M Grill has a few options. I’d go with the subtle coconut flan if their regular flan is sold out. 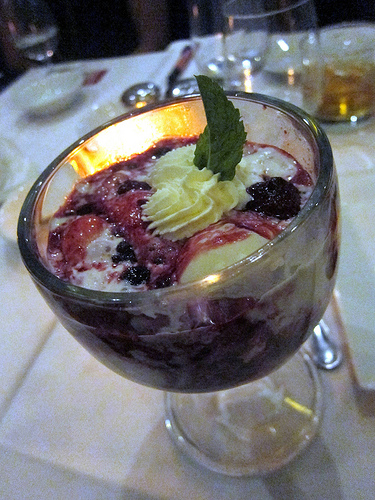 Or for an old-fashioned delight, try the flambe.

M Grill has its own parking lot and inexpensive valet, a must in Koreatown. M Grill would be a great place to go with family and friends. I would recommend it as a date spot… possibly the third or fourth date. Depending on your date, of course.