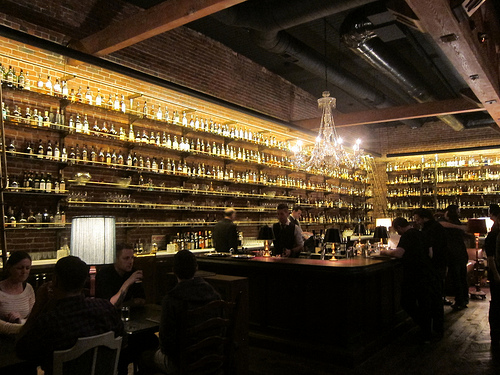 When I heard Multnomah Whiskey Library had 1500 bottles of spirits, I knew that was the must-see bar I had to squeeze in during my busy Portland Cocktail Week schedule. We arrived at 4 p.m. when it opened and everyone had the same idea. Imagine 100 bartenders waiting cheerfully to get in and that was pretty much the first 15 minutes of the line.

Initially, the Whiskey Library tried to enforce the 6-persons standing rule at the bar but they gave up that day to this very thirsty industry. We lucked out and got a few seats by the fireplace in the back but we were told we would have to leave in about 40 minutes. That was fine since we intended to only have one drink before going to Raven and Rose but it took a while to get our drinks made.

close up of the bar

They allow only 6 people at the bar to stand. Otherwise you have to get a table. They also serve food at the Whiskey Library and it’s pretty neat to watch the food come out from behind the sliding window.

There are two menus. One is a list of all the spirits and one is an abbreviated list with cocktails. The cocktails listed are classics and I decided to go with a Toronto (Forty Creek barrel select Canadian whisky, Fernet-Branca, clover honey, aromatic bitters). 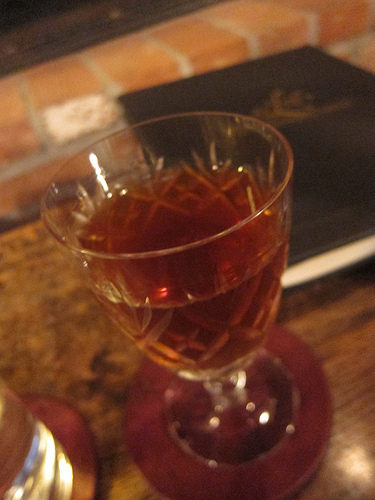 I found it interesting the Library chose to use clover honey instead of simple syrup for the cocktail. The result was a more mellow and tame cocktail. I didn’t get much of the usual Fernet-Branca bitterness. It would be ideal for those who like just a hint of bitterness.
I can’t wait to visit again when there’s more time to full enjoy the experience.

3 thoughts on “PDX: Checking Out The Multnomah Whiskey Library”