PDX: Those Wings at Pok Pok 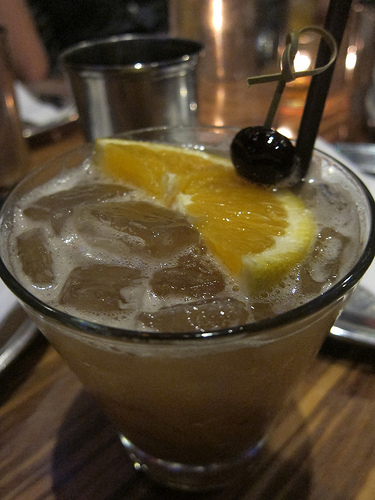 I’ve been to Portland a handful of times and each time I return home, someone will ask, “did you go to Pok Pok?” And I’ll mumble something usually along the lines of “no, but I’ve been blah blah blah.” They never care. They just want to hear about Pok Pok. I feebly offer up I’ve been to Ping, Pok Pok’s sister restaurant (now closed). But yes, it’s closed so no one cares. Pok Pok, Pok Pok, tell us about Pok Pok! 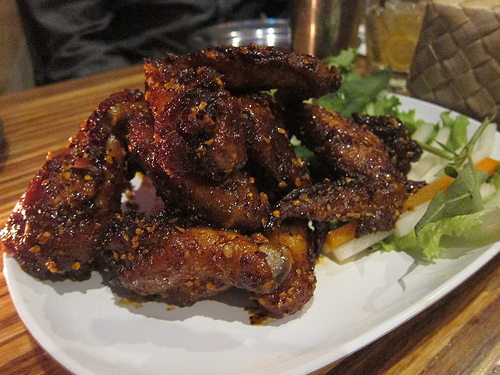 I copied someone’s drink order and had a tamarind whiskey sour with Hudson baby bourbon. It was a great drink. I was in Portland for Portland Cocktail Week, so I expected to drink great drinks all week. I’m glad Pok Pok didn’t disappoint. They also own Whiskey Soda Lounge across the street and perhaps I’ll check it out on the next trip.

I was with a dozen people and someone else did the ordering. I mentioned I pretty much needed to try the chicken wings and was open to everything else. We sat around two tables and got two orders of everything.

Yes. Those wings. Everything and then some. The Ike’s Vietnamese fish sauce wings could be made spicy but we had ours as is. I would return and get two orders of these wings and a bowl of rice. For myself.

We got the green papaya salad vegetarian for the veggies in our group. I would have of course liked it with the dried shrimp but it wasn’t bad without it. I expected it to be spicier and was secretly glad it wasn’t. Still, I’ve had better versions of this in LA’s Thai restaurants. I order this dish everywhere and some favorites in LA are at Hoy Ka and Palms Thai. 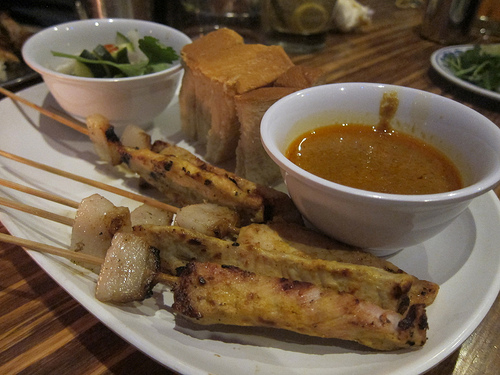 To appease the meat eaters, chicken and pork skewers showed up. I’ve never really been a fan of satays since the peanut sauce tends to be on the blander side and the chicken usually is dry. Pok Pok changes the game by grilling the chicken with fatty pork. The sauce was more complex than creamy peanut butter.

I tend to like sausage of all kinds and Thai sausage is no exception. I found serving it with pork rinds interesting. More whiskey. Now.

The only fail of the night was the whole roasted fish. We had to send this back twice and finally gave up. It just came out raw and even more raw the second time. We wondered how that was possible. In the meantime, the other table thoroughly enjoyed their fish. Luck of the draw, I suppose.

One of the more confusing dishes was the Yam Makheua Yao which was composed of Asian eggplant, shrimp and egg. I liked the dish just fine but others found the combination odd. I loved the tartness of the sauce. This was a great dish for the rice we were sharing.

Would I go back to Pok Pok again? I would, actually. But I’d order for myself.

5 thoughts on “PDX: Those Wings at Pok Pok”