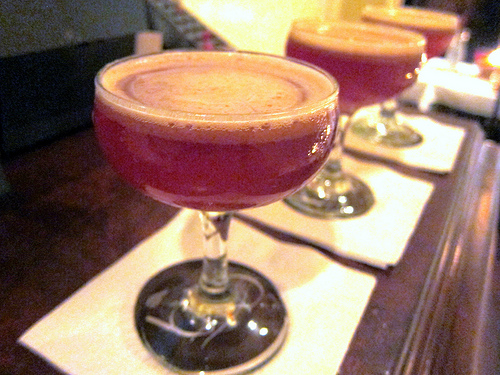 I was invited to a special dinner for Hudson Whiskey at Big Bar and Alcove Cafe in Los Feliz a couple weeks back. The dinner included a tasting of the Hudson whiskey line from Tuthilltown Spirits as well as cocktails made from the spirits. We started off with heavy appetizers outside including smoked trout deviled eggs, mac and cheese fritters with tomato basil soup, bacon wrapped figs stuffed with goat cheese and a wonderful pecan-infused Hudson Whiskey Manhattan.

Gabel Erenzo along with his father Ralph Erenzo and a partner started Tuthilltown Spriits when the land they purchased for a rock climbing facility didn’t work out. The land was already zoned for agriculture and they looked to their neighbors for inspiration. They decided to start a distillery, the first in upstate New York after Prohibition.

After they had made a small batch, Ralph looked up whiskey stores and brought all their hard work in for a tasting at a local New York store. The owner bought everything on the spot and started selling the small now signature bottles at a premium. That strategy paid off and now Hudson Whiskey is very popular.

Ralph Erenzo at Tales of the Cocktail 2012

I had heard part of this story at the Tales of the Cocktail seminar, Distillers’ Dream. On the panel was Gable and the team from William Grant which bought Hudson Whiskey a few years ago. 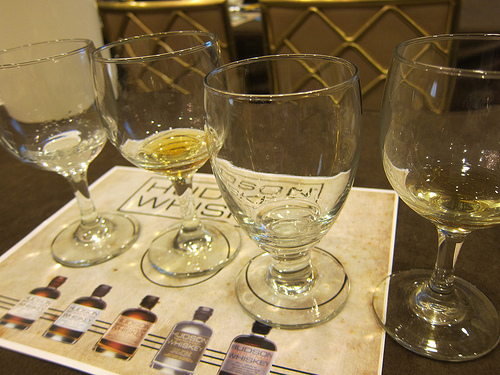 I had tasted most of the Hudson Whiskies before but new to me this evening was the New York Corn. It’s made from 100% corn grown in New York. I was surprised by this whiskey. There is no sugar added but it is slightly sweet and for an unaged whiskey, it’s very smooth.

There’s also the Manhattan Rye, Four Grain Bourbon and Single Malt whiskies. I liked all of them but in different ways. The rye was almost all rye unlike most ryes on the market these days. That’s because rye is hard to deal with. Apparently it gets everywhere and is sticky. As a bourbon drinker, now rye lover, I really liked the spicy notes of this.

I’m most familiar with the Hudson Baby Bourbon which I love. At the dinner, we learned how it’s not really very cost effective any more to age in smaller Tuthilltown barrels (they own part of the cooperage that makes the barrels these days).  But when they first started out, they didn’t want to waste the liquor aging in larger barrels. When they got a little bigger, they tried and the taste wasn’t the same so they went back to the smaller barrels.

With the barrel-age cocktail craze on, Tuthilltown made back the loss profits (and more!) by selling used barrels and now there’s a waiting list to get one. My favorite use was hearing a maple syrup producer aging maple syrup in a cask and then Tuthilltown reusing those barrels. Maple barrel aged whiskey? Yeah, let’s have it!

Big Bar will be aging their own cocktail in a special Tuthilltown barrel. We got to taste it before it went in the barrel and at some point, I hope to try the aged version. 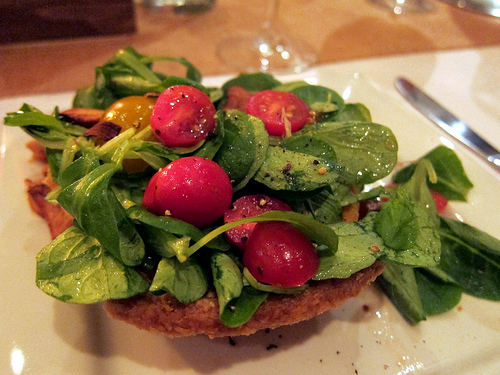 Alcove Bakery incorporated the whiskey in all forms of the food this evening. I say however they did it in this Point Reyes bleu cheese onion tart (I’m guess the dressing, actually) was magnificent. The pastry part was so flakey and nothing is better than good food made with fresh ingredients. Sometimes when I think about eating less meat, it’s things like this tart that makes a persuasive argument.

But of course, I probably would never go vegetarian when I can have things like Alcove’s roasted pork loin. The corn pudding was my favorite part. I hope the veggies at the table got to try this corn pudding– it was incredible. 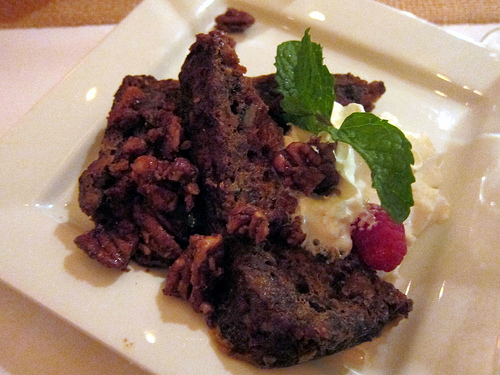 I was lured to this dinner with the promise of the carrot cake French toast dessert. Remember that pecan-infused whiskey we had in the Manhattans earlier? Well, the pecans were then crisped up again with the corn whiskey and added to the bourbon glaze topping for this carrot cake that was baked with French toast batter. Words can’t even describe the joy spreading across people’s faces (mostly mine). And I don’t even like carrot cake much less carrots! I was intrigued by the idea and I’m glad the taste lived up to expectations.

The dinner was a lot of fun and now I’ll look for the other whiskies in the Hudson line and branch away from my beloved baby bourbon (now and then, of course).