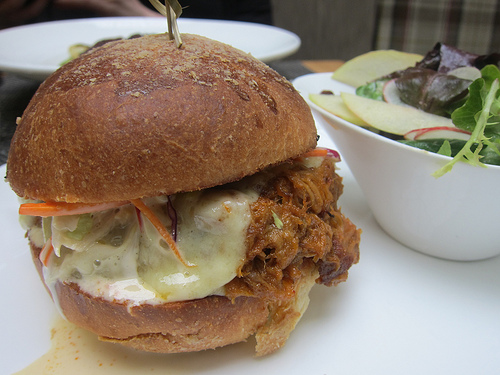 On my last trip to Portland, I stayed at the Nines Hotel. The restaurant Urban Farmer is just off their lobby on the 8th floor. After a week of great meals at food carts, fab dinners, fun brunch and everything in between, it was nice to have lunch at restaurant just an elevator ride away.

I was heading out to the airport and decided to get a simple roasted pork sandwich and soup.

I was a little worried at first when I heard the soup of the day was gazpacho — in October! but luckily they did have a warm soup as well. I tried the butternut squash soup with yogurt and harissa. It was exactly what I wanted, tummy-warming.

The roasted pork sandwich is much like a pulled pork sandwich with slaw. There was a spice or smokiness that I associate with smokey mezcals. After a week of drinking for Portland Cocktail Week, I was glad I was able to finish at least half my sandwich. Perhaps I should have had this at the beginning of the week. 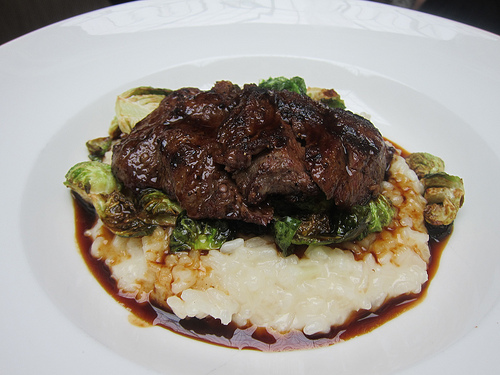 My friend got the three-course tasting which included the Fall apple salad that day. The entree was a skirt steak with risotto. I was momentarily envious since I was on a rice kick that week.

I had a bite though and I really enjoyed the Brussels sprouts with the steak and rice. It was pretty much a perfect bite. 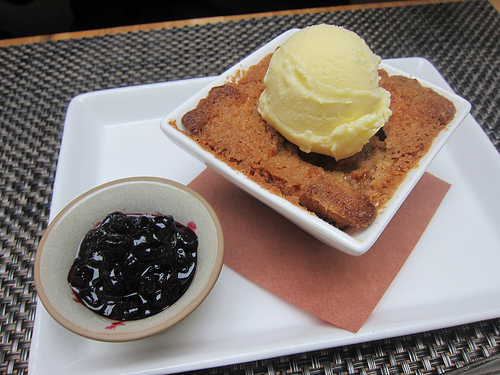 The three-course meal came with dessert. This day was a honey crisp apple cobbler. I was worried about the time I had to get to the airport so I didn’t have more than a bite. Otherwise, I might have had more than my usual 2-3 bites of dessert. I really liked the orange blossom ice cream. It also came with a small dish of huckleberries which added just a little bit more sweetness.

We enjoyed our stay at the Nines and would return again to this restaurant if we stayed again. But next time, hopefully I won’t be in such a rush.

Urban Farmer at the Nines Hotel