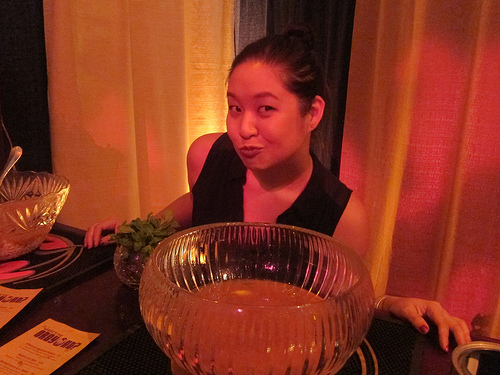 Beer and a shot

Earlier in the day, I began seen #wherestheorgyat hashtag and heard rumors about this fab party. The team had set up a twitter and instagram and took to social media to advertise their bar concept. When I arrived, I was greeted by Jake Bliven from Eugene, Oregon acting as security for his team’s bar. But this was sort of bar everyone was welcome. Jen was handing out the Struggle Cuddle punch and I watched Vesper’s Roger Gross from Las Vegas shaking everything he’s got on the stripper box. It was very fun. While I didn’t like the smoke machine, I gave them points for authenticity.

The Money Shot and Beer was my favorite 2-step combo. That hops infused vermouth was great. 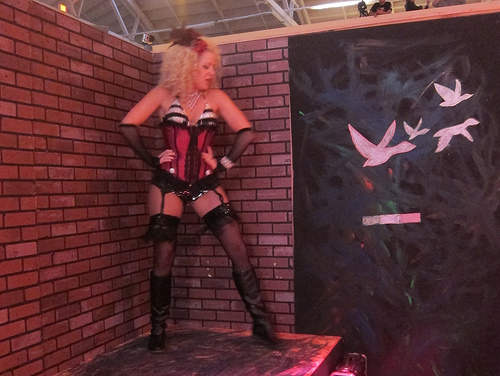 At the French-themed Bar Belle, they were unapologetically serving up sexy. Drink menus were printed on CDs which served as handy coasters. There were plush furnishings to lounge around on as well as a giant Grey Goose ice sculpture. The team which included LA’s Luke Ford from Seven Grand were spinning out drinks rapidly.

loved that the punch bowls was a globe cut in half

One of the cocktails was served in a hollowed-out apple. Fun though I’m not sure how that related to travel.

I hadn’t tried the Coastal Collins initially though I loved seeing San Francisco bartender Tiny de Lota from Tonga Room serving them. But I can’t really resist drinks with mint and I thank the Passenger team for heaping mint on me.

All the teams had to rent furniture, glassware, figure out booze cost and build out their bars. Initially it seemed like Ramble House would have it the easiest picking out the theme “neighborhood bar.” They could really decorate any way they felt like since they didn’t have such a set, pre-conceived theme like a nightclub/ lounge. I loved that they brought in a “outdoor” patio and even a fire pit.

LA’s Dustin Newsome from Seven Grand walked around with the Boilermakers and everyone was very friendly. It’s hard to pick a favorite since I had friends working at all the bars but I did feel really comfortable at Ramble. And apparently people agreed with me because this bar team won the competition. All the teams were a couple points away from each other though. It was a very tight race.

Congratulations to all the teams! This was one of the best competitions I’ve seen. I saw photographers on cranes. I hope they make a documentary because I would love to watch the planning process and the build-out. Perhaps it can be screened at next year’s Portland Cocktail Week?