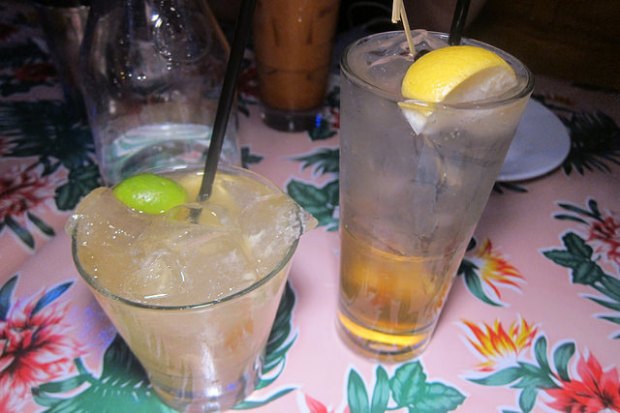 Khing and I and Apple Gin Rickey

Pok Pok LA is now open in Chinatown. The two-story restaurant with patio occupies a corner of the Mandarin Plaza, near the Mandarin Chateau. The more casual Pok Pok Phat Thai opened earlier this year. I’m very familiar with Pok Pok having been to the one in Portland as well as Chef Andy Ricker’s now closed Ping restaurant.

We started with a couple of drinks including the Khing and I and Apple Gin Rickey. I was interested in the Khing and I because it uses Thai whiskey. Both are great while eating. For more serious times at the bar, check out the whiskey list. 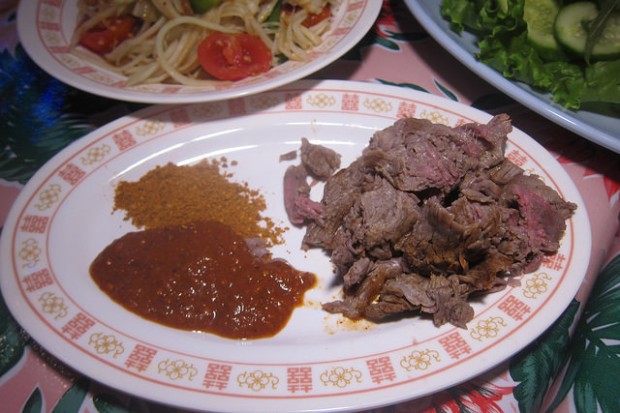 When a menu item is described as being pounded by a sledge hammer, what do you do? Get it, of course, The tender flank steak was enjoyed with a mix of rices. We got all three; jasmine, coconut and sticky rice.

The must-order item are the Pok Pok wings. These fish sauce wings are famous for a reason. As a chicken wings lover, these hit the spot.

I must eat green papaya salad almost every week. I loved the tomatoes in this. They were so very fresh. Pok Pok’s version has fresh squeezed limes already tossed into it but  would probably add just a smidge more acid though. I’m glad it wasn’t too spicy but it did make me yearn for the instant sweat-inducing version at Sticky Rice at the Grand Central Market.

To go with all that rice, we also ordered the pork belly and pork shoulder curry. It was more like a thin stew than curry. The pork was super tender and my favorite dish of the night.

I wanted a noodle dish and we tried the khao soi with chicken. You may also opt for a vegetarian version. It’s quite a generous portion of chicken. I have to say though my fave khao soi is still at Playground in Orange County. Night Market Song also makes a killer veg version.

A note on the dining tickets- you may reserve lunch or dinner by buying tickets. However we just walked right in opening week and were seated right away. It wasn’t too busy on the later side on a Thursday evening.

← West 3rd: All New Drinks at Goldie’s and That Burger!
Koreatown: Tonkatsu at Wako Donkasu →