Chinatown: In Search of XLBs at Mandarin Chateau 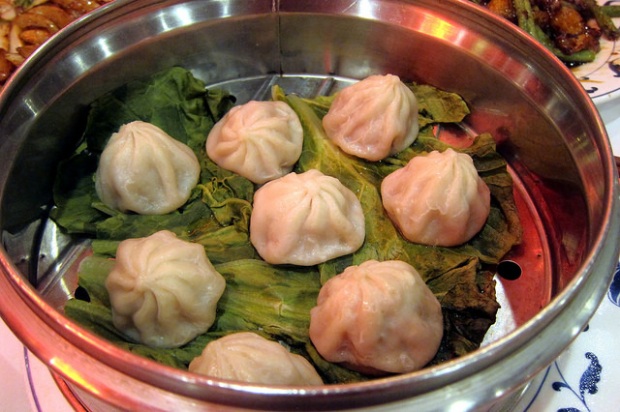 Located in a lonely plaza in Chinatown, Mandarin Chateau could be called a hidden gem. It’s open late night(ish) and is relatively different enough to seek out in Chinatown. Most of the Chinese restaurants in Chinatown are Cantonese. So it’s great Mandarin Chateau has juicy soup dumplings, Shanghai rice cakes and tea-smoked duck; food you usually have to drive a little further in the San Gabriel Valley to find.

Our quest to find the best xiao long bao led us to Mandarin Chateau. The wrappers were medium-thick, the meat was flavorful and there was enough soup– barely. I did enjoy them but the quest for XLBs continues.

I have been told looking for the thinnest wrappers like Din Tai Fung is actually an impossible task as most wrappers aren’t supposed to be that thin. I still like that delicacy though. 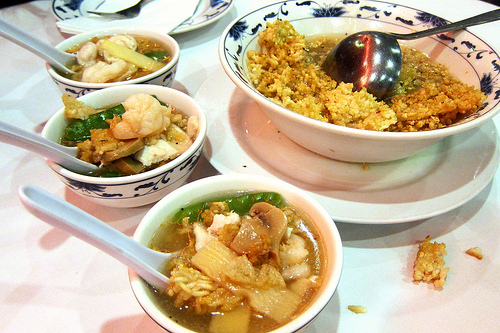 It was a rainy night so we decided on soup though truth be told, I can have soup any time even in the summer. Saying it was raining was just an excuse to my dining buddies. We enjoyed the sizzling rice soup which came in a rice patty that was added to the soup. There was also chicken and shrimp in this soup in addition to the bamboo shoots and mushrooms.

Generally I would get Peking duck if I see it on the menu but heard the tea-smoked duck was better. It turns out this dish was full of meaty goodness. Although the skin wasn’t as crispy as it would be for Peking duck, I actually prefer more meat to fat/skin ratio. 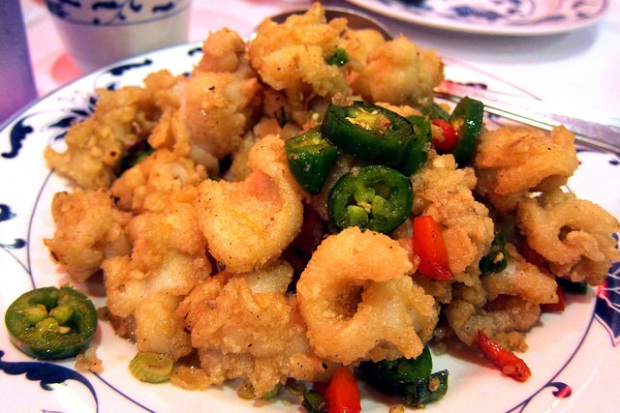 A dish that crosses over in many Chinese regions is the salt and pepper squid. This dish was well executed. 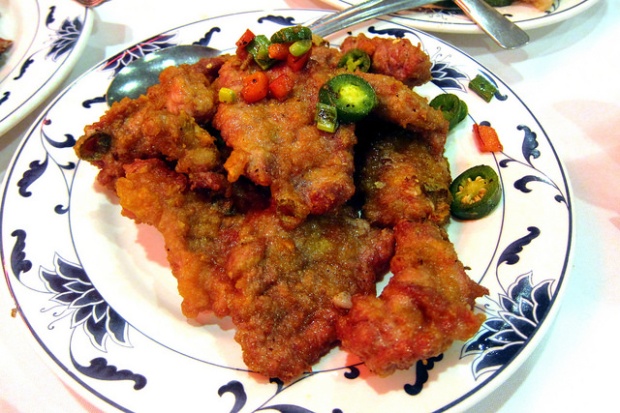 We ordered so much food, Mandarin Chateau gave us an extra dish. They give you a free dish from choice of  5 dishes if you spend over $30. We chose the spicy pork chops. It’s not really spicy. It has a good batter on the pork chops.

We needed a veg so we talked it over with the server and she recommended the green beans and eggplant. They also have eggplant with pork but we had so much protein already, it was nice to get an all-veggie dish.

Although we had rice (and even rice in our soup!), we wanted an extra carb-y dish. Shanghai rice cakes are a classic. These were just the right amount of chew.

Mandarin Chateau would be a great spot to hit before checking out General Lee’s across the street for drinks.

One thought on “Chinatown: In Search of XLBs at Mandarin Chateau”