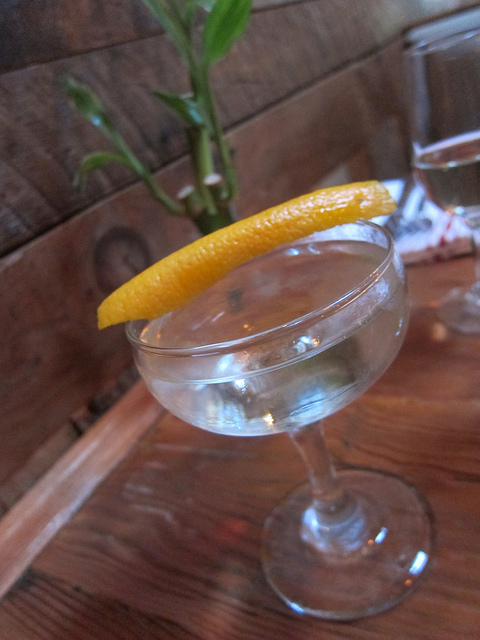 Tipple and Brine is the Valley’s newest hotspot. With a new American menu of favorites like raw oysters, kale, uni to hearty comfort food plates, it’s a great spot for dinner.

The large restaurant is dominated by a bar that runs almost the length of the restaurant on one side. High tops and comfortable booths round out the space. The drinks were designed by Daniel Zacharczuk (Honeycut, The Varnish). I’m enjoying the fact craft cocktail programs are popping up throughout LA but particularly in the Valley. The Valley needs more spots like this but until then, let’s explore Tipple and Brine.

I started out with the Ford Cocktail since it looked like the summer version of my drink- stirred. It’s basically a lovely gin martini with a hint of Benedictine. 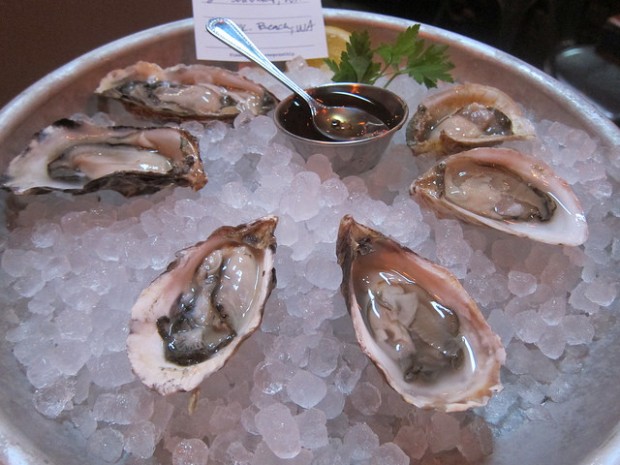 Tipple and Brine has a raw oyster bar but what’s special about it is you can also do oyster luges with Scotch. Pick from Bowmore 8 year, Bowmore 12 year or Bowmore 18 year to go with your oysters. First you take a small sip of the brine from the oyster, then a sip of Bowmore, eat the oyster and pour the rest of the Scotch into the shell. Then luge! It’s a little bit briney, minerally and smokey. We got a mix of oysters but larger oysters tend to work best. These would be East Coast oysters. 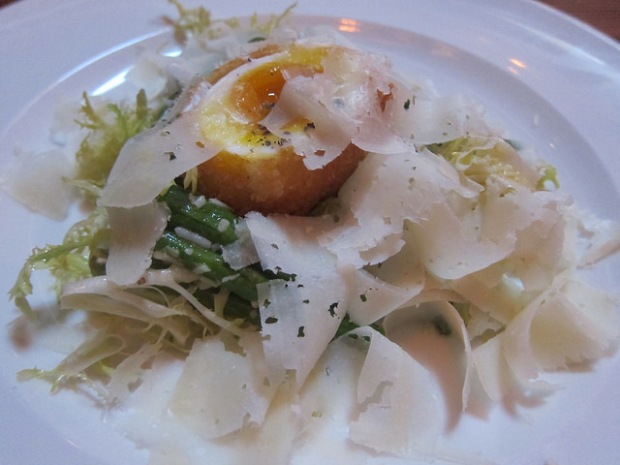 To balance things out, we wanted to get the kale salad but our server convinced us to try the asparagus salad with crispy egg. Topped with a huge mound of Manchego, we almost forgot about “that pile of kale.” The sherry-maple vin dressing was quite nice. 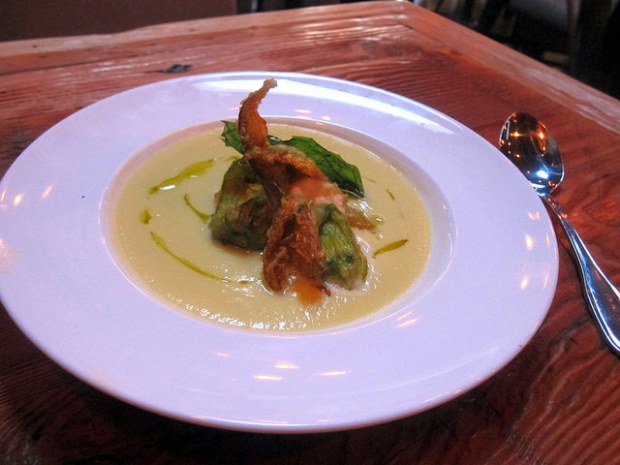 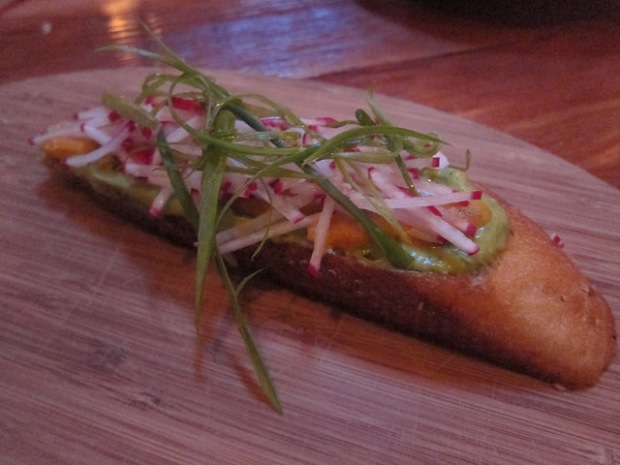 I almost got the smoked trout rillette but at the last minute, the sea urchin toast called out to us. I was intrigued by the luscious texture of uni with avocado mousse. The radish and scallion keeps it from being too creamy. It’s the sort of thing that may be common in downtown Los Angeles but in the Valley, this is truly exciting. 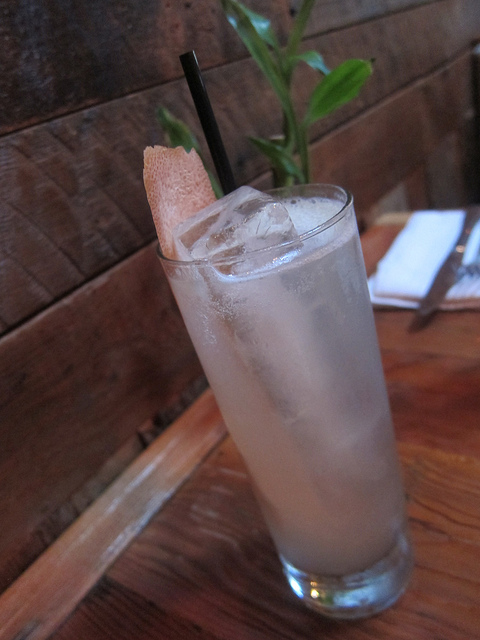 Years ago, Daniel competed in LA’s Best bartender contest with Faster Young Fruit. When I saw it on the list, I was happy to try the drink again. It’s very refreshing and just perfect with our food. 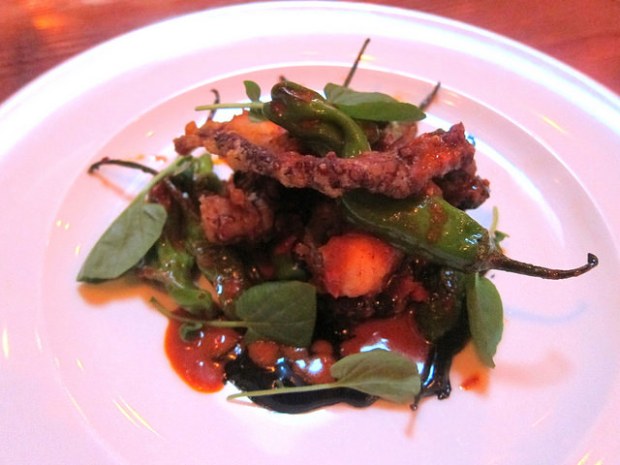 I was looking forward to the fried octopus. Seafood and perhaps the tentacle-y bits are some of my favorite bites. It turns out I value the slightly springy texture of octopus so frying octopus was not my fave preparation. However, I liked the shishitos and and eggplant in the dish. 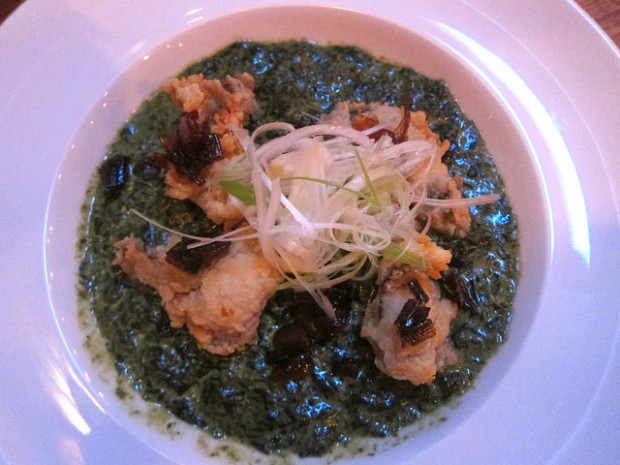 I love oysters. Sure, we just had some raw (with Scotch, even!) but I really wanted to try the fried ones as well. These were great. I thought I could handle the pungency of the creamed nettles but after a while, my nose went crazy. Get this if you’re into funk. Lovers of durian will dig this. 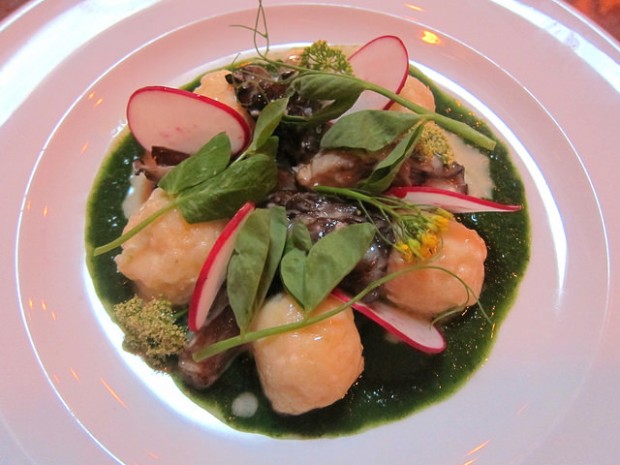 It was one of those dishes that I spotted on instagram that I knew I had to have. The raw pea sprouts and radishes were great textures to contrast against the pillow-like gnudi (ricotta dumplings). I also enjoyed the sauce of English pea puree. Really dynamic colors of this dish. Plus you really can’t go wrong with hen of the woods mushrooms. 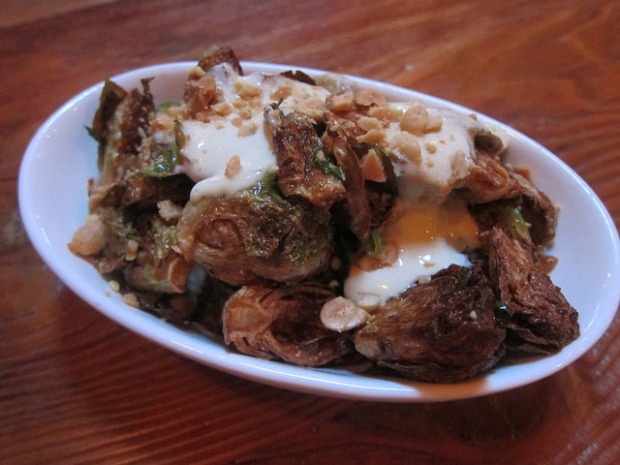 What’s outlived the hype? Brussels sprouts. They were a trendy veg a few years ago and somehow managed to retain a cult-like status. Why? Because they’re really good. Tipple and Brine’s version with sweet chili vinegar, peanuts, mint and “miso-nnaise” was a slightly Asian take on the equally loved (adults) and hated (kids) veggie. 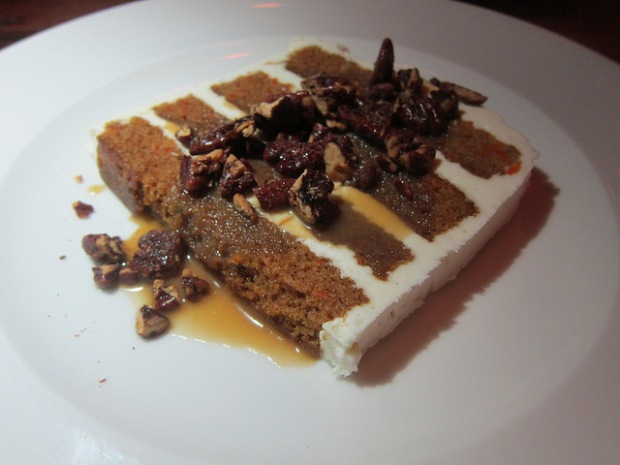 I hate carrots. I avoid them as much as possible. But my best friend convinced me to try it. She pointed out this cake had bourbon butterscotch and candied pecans. All right, I barely discern there’s carrot in this. Instead I concentrated on the lovely cream cheese frosting and decadent bourbon butterscotch sauce. Forget about it, it’s on. Carrots be damned! 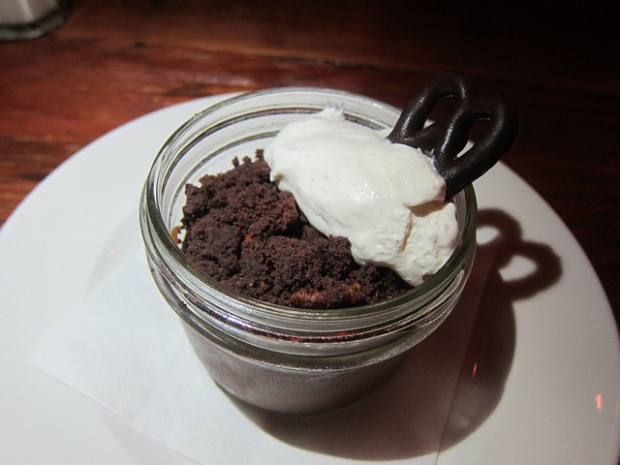 To go with my chocolate cremeux, I sipped on a bit of Fernet-Branca while enjoying the luscious pudding with pretzel streusel and brown butter whipped cream. Not to mention the salty caramel. The dessert was basically magic in chocolate form.

If you should find yourself at Tipple and Brine or even in the vicinity, head out and around the back to the Tunnel Bar upstairs to round out your night.

One thought on “Sherman Oaks: Dinner at Tipple and Brine”