Harlowe in West Hollywood is now open. The romantic room features portraits, a prominent bar and a food men by Chef Eric Greenspan (The Foundry). Dushan Zaric of Employee’s Only and The 86 Company designed the beverages. Kyle Ackley (Drago Centro) and Chris Amirault (MessHall, The Eveleigh) run the bar with a great crew that includes Rosie Ruiz (Big Bar, Connie & Ted’s) and Una Green (Sotto).

While my favorite thing is to sit at the bar and watch drinks being made, some just want to get their drink on right away. If that’s your MO, try either the draft cocktails which are classics like Moscow Mule, Paloma, Negroni and Old Fashioned. There are also bottled cocktails. Get a Sazarac, Americano, Gin and Tonic or Pisco Punch.

I was immediately attracted to Our Man Rio which plays with two of my faves; Green Chartreuse and Benedictine. These herbal liqueurs are lightened up with cachaca and given a slight Latin spin with jalepeno, lime and agave flavors. It’s a good sipper. Another refreshing drink was Captain Planet. Lately I’ve been into watermelon for summer drinks and this genever-based drink has a lovely spiced watermelon shrub.

As mentioned, Chef Greeny came up with the food which includes a few snacks like cheese puffs. Anyone who loves garlic knots, gourgeres or Brazilian pao de queijo would enjoys these soft puffs.

Initially I was going to go for the fish and chips but I wasn’t feeling the fried smelt. Sometimes I can be a traditionalist about food and wanted a nice big piece of white fish. So I went with the French dip. It’s a good sandwich and the sort of food you want while imbibing. 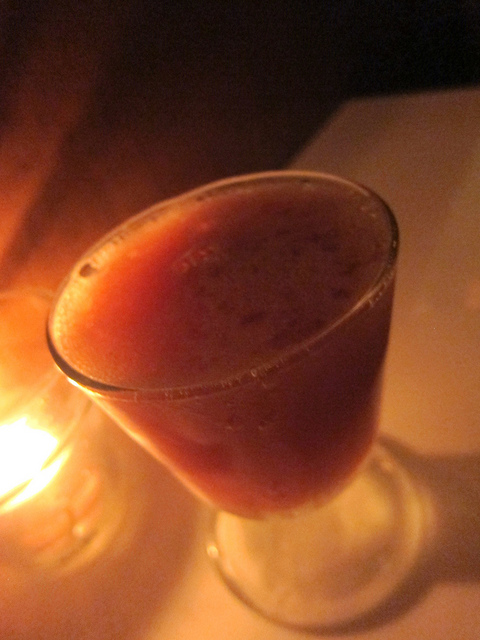 I wasn’t surprised when my favorite drink turned out to be the Gilbert. It’s slightly on the sweeter side but the five spice keeps it from being too insipid. It’s more than a triple threat of grape from the pisco, chardonnay, grape cordial and just to go big or go home, there’s also champagne grapes. I fully expected grapes as garnish but Harlowe wisely kept it simple.

Eat your vegetables. Eat Brussels sprouts. You can’t go wrong with these at Harlowe.

Everyone loves a good pun. The Shandy Koufax with one of my favorite amari, Meletti, is outstanding and just the right drink for this warm summer. The refreshing IPA beer cocktail would be a great choice for quenching your thirst while checking out one of the themed nights at Harlowe. I recommend the Sport & Game Night on Tuesdays.

4 thoughts on “West Hollywood: Cocktails and Bar Bites at Harlowe”