Last night I attended a screening and after party for the film, “Hey Bartender.” I was excited to watch the film after watching the trailer because I recognized many of the places they shot at including Portland Cocktail Week, Speed Rack in Portland and LA, Manhattan Cocktail Classic including Rematch, Tales of the Cocktail– actually, I was at a lot of those events! Did I catch a glimpse of myself? Nah, but I loved seeing all my friends on the big screen.

The story is about the bartender in the current cocktail renaissance. There are interviews and stories from Dale DeGroff, Julie Reiner, Eric Alperin and other cocktail whizzes. Plus history lessons from writers, restauranteurs and other industry leaders all blended in with the “tale of Two Steves.” One is Steve Schneider of Employees Only, a hot craft cocktail bar in New York City and Stephen Carpentieri, owner of Dunville’s, a bar in Westport, CT. 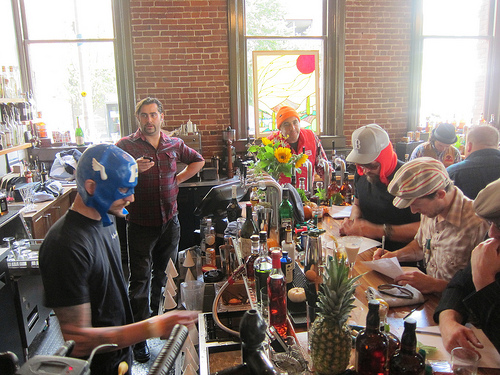 Back in 2011, I went to my first ever cocktail week, Portland Cocktail Week. At that time, I had been writing The Minty almost two years and had fallen in love with classic and creative cocktails. I had heard about all these wonderful cocktail weeks and knew I had to go to one. I’m really glad I attended the one in PDX first because the small group of 300 bartenders allowed me to really get to know everyone in the industry from around the country and really, all over the world. I would go on to more cocktail weeks until I eventually made it to the big one, Tales of the Cocktail last year. At each fest, I met many ‘tenders and renewed friendships. When I walked into the Bon Vivants’ Triple Buck competition, I really had no idea what was in store for me. And that is where I first saw Steve Schneider compete. Here’s the video I shot.

Hey Bartender was shot over 4 years. By the time I met him in 2011, Employees Only had won World’s Best Cocktail bar at Tales just a few months before. He was wearing a Captain America’s mask. I wondered how he could see to make drinks.

It was and still is one of the best cocktail competitions I ever saw- a mix of whimsy and utter professionalism. I saw these bartenders having fun but still caring how their drinks tasted. I left the competition and Portland Cocktail Week with a sense of something more than that cold drink in my hand. I had found a family, my pals. I ask people all the time why do they go to bars? Even if they don’t talk to anyone, they are in the midst of humanity. I get a certain kick out of going to new bars and getting to know the bartenders. Sure, I like their drink knowledge but I really like just getting to know people. And I like connecting people with others. And I felt that same joy after watching the film. When we sat down in the movie theater, I remarked I was watching this film with friends. We are sharing the same experience. Some told me afterwards they wanted to go to work while I joked I wanted to go to a bar. Same thing, almost.

The after party was at the Andaz on Sunset. It was super cool they lit the pool with the Hey Bartender logo. I think it gave everyone an easy spot to splash onto in the dark because before you knew it, Steve Schneider led the way. Then one of our local cocktail kings, Aidan Demarest of Neat jumped into the pool. Birthday girl Zahra Bates (Cole’s/ Art Beyond the Glass) quickly joined him and the others followed.

I had a chance to speak to Dushan Zaric, co-owner of Employees Only. He is also heavily featured in the film. He also co-owns The 86 Company, a new liquor company. He and his partner Simon Ford recently moved to LA. I wondered if they would open a bar in LA but Dushan said they wouldn’t. He wanted to concentrate on 86. Then I asked Steve if he missed seeing Dushan all the time but he said he speaks to him frequently. I also asked who’s running the bar at Macao Trading Company where I saw him compete and win the US competition of Rematch. Steve says he’s got a good guy there he trained.

It’s fun because you think about these bartender family trees and who they trace back to. In New York, they trace it back to Dale DeGroff. In LA- it could be debated, would it go to Eric Alperin who brought his bar smarts from NY where he used to work at Milk & Honey under Sasha Petraske who of course said he owes everything to Dale DeGroff or to our homegrown Julian Cox? I’d say Pablo Moix and Steve Livigni are also very well known here.

The film touched on the fact there seems to be craft cocktail bars popping up everywhere and cocktail weeks have only gotten more popular. Los Angeles will host its love letter to the spirits industry next January with the Golden State of Cocktails. Yes people, Sacramento and San Francisco have beat us to it with theirs. I’ve heard of cocktail weeks in Australia, India, Russia, France and now we finally get one. But that’s a good thing because all this experience comes in handy.

It wouldn’t be a party for bartenders without drinks. We had drinks in the elevator even. I first tried the Saldana Smash by Jason Bran who is featured in the movie along with Matthew Biancaniello from Cliff’s Edge.

Then I tasted the Batanga by Eric Alperin. It made me laugh it was stirred with a knife. Yep, it’s tequila and coke but not just any coke but Mexican coke. 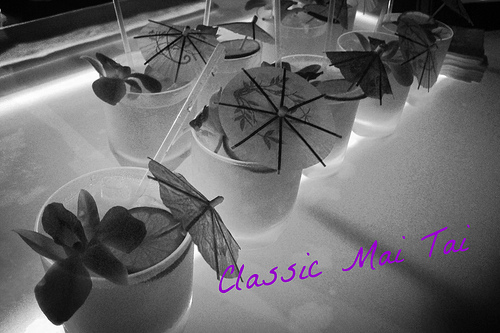 And I ended with the pretty classic Mai Tai. I loved that it wasn’t too sweet.

I didn’t try Matt’s Roquette but I’ve had it before at Cliff’s Edge. It’s a great drink. Also featured was a drink from Chasen’s, one of those now closed classic LA restaurants. I bet the sherry would have given the cocktail an interesting spin.

Can’t wait to see the film in theaters? You can buy it on iTunes. I know I want to try to see it again. And if you’re in LA, it’s playing at the Sundance Sunset Cinema starting this Friday where conveniently SOMM will also be playing the following week. If only they’re showing at the same time, you could make it a boozy double feature!

Although I have been to EO in NYC, I’ve never written about it. Nor have I written about the EO pop-up at Tales. Enjoy the photos though!

← Pasadena: Getting Pizza at The Luggage Room
West Hollywood: Vegan Food and Cocktails at Crossroads →