It’s been a while since I’ve been to Little Next Door. It’s one of those staples on West Third in Mid-City known for casual French fare. I was invited in to check out the menu tweaked a bit by Chef Kevin Luzande, last seen at the now closed Acabar. He consulted on the menu and will refresh the menu seasonally as he prepares to open a restaurant in Mexico. Currently the must-have item to get is the cherry clafoutis. Chef Kevin says it’s the best since cherries are in season now.

But if you’re not a dessert first sort of diner, let’s go through a run down of some new dishes, shall we? Starting with the country crouton, the toast with brie and this fantastic apple splits its time as a savory-sweet appetizer. Walnuts give it a nice crunch. Although I tend to think of apples as a Fall thing, they are available year round so I suspect this dish will be around for a while.

A slightly Asian tuna tartare is also available. Just think of it as the forerunner to poke sine this one also features shoyu and sesame oil. It’s always welcome at my table.

In fact, so is a good beet salad. Little Next Door’s version has the perfect amount of goat cheese (lots) and this super interesting pistachio granola. 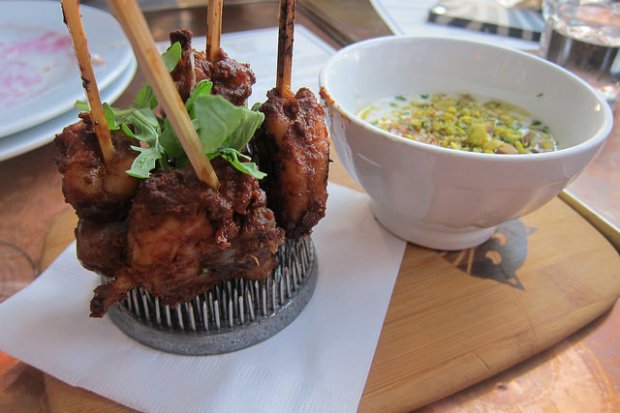 Pistachio shows up again in the labneh (yogurt) dip accented with harissa and aleppo pepper for the spicy prawns. I’m really digging the international vibe of the current Little Next Door menu.

One of the things I love about summer is the availability of sweet corn. The summer ravioli features corn and the cutest little chanterelle mushrooms. I swear everyone moaned when eating these decadent little bites.

Usually I turn up my nose at cooked salmon but this seared salmon with zucchini and basil risotto was worth the wait. I also really enjoyed the oven dried tomatoes.

We shared a large serving of steak frites (fries not shown). The top sirloin was cooked just the way I like it; medium rare.

A great side would be the cauliflower duo with both cauliflower puree and caramelized cauliflower. I keep wondering when cauliflower will become the new trendy vegetable. This dish showcases its versatility.

And don’t forge the other desserts! I am not a coconut person but I really liked Little Next Door’s version. It’s quite subtle. The pot du creme had gorgeous and luscious chocolate.