“I want seafood. But no sushi. And not too expensive, either.”

This is what the Gay Boyfriend told me one Sunday evening. After going back and forth, we ended up at Little Next Door where I seem to always end up whenever I’m in that area. I can’t help myself, I like French food. Little Next Door has a 3-course prix fixe menu though I later found out they were also doing dineLA. I opted to get the prix fixe while I recommended the Gay Boyfriend get the Nicoise Salad. 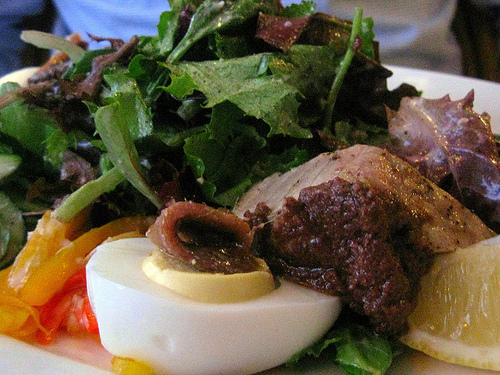 I opted for the duarade which is also known as dorade or sea bream. The preparation is very much like how I like fish; grilled with some veggies. After the light cream of mushroom soup, I was feeling even slightly healthy to be eating this way.

But then I had the chocolate pudding with salted caramel and dried fig. Um, yeah, whatever healthy feelings I had earlier were immediately replaced by this decadent silky smooth pudding. I had a few bites and had to push it away. So rich.

2 thoughts on “Little Next Door”