I’ve been hearing about Magnolia Bakery for a few years now. Even before the cupcake sensation hit LA, I knew about Magnolia. Mainly through their cookbooks and word of mouth. The rumors of a LA outpost seemed to have started 2 or 3 years before they actually opened earlier this year. And I heard so much from the gay boyfriend who has visited every Magnolia Bakery in New York. His favorite is the molasses cookie. After we had dinner at Little Next Door, we scampered over for his cookie fix.

Last week, we attended a sneak peak of their fall goodies. Except they told us to get whatever we wanted. The gay boyfriend took two molasses cookies. 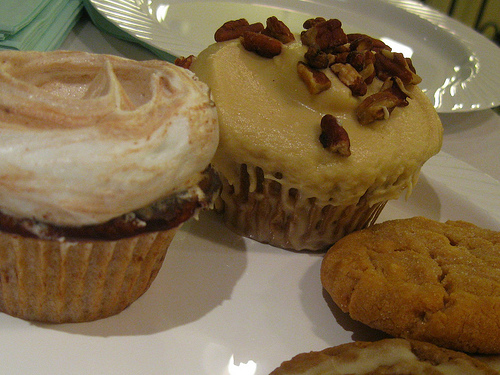 I was surprised how moist the cupcakes were and the frosting wasn’t too sweet. These are my kind of cupcakes. The pumpkin spice was my favorite. For those who like marshmallows, you have to try the s’mores one. 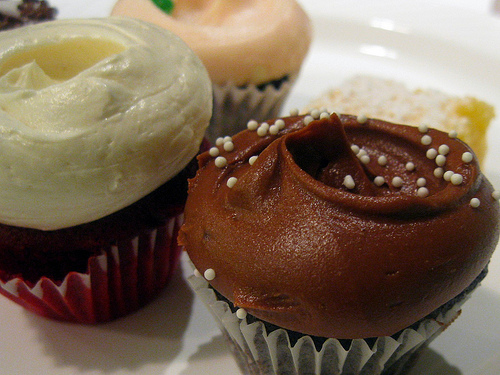 I couldn’t resist trying their regular flavors; chocolate, red velvet as well as a brownie bite and lemon bar. Lemon bars are my favorite and Magnolia’s was pretty nifty. It could have been slightly more tart (but hey, I’m an acid fiend). We were given some cupcakes to go and they remained quite moist the following day. In fact, the gay boyfriend did think the LA versions of his beloved Magnolia Bakery were more moist. Must be the water, eh?

I think the tour de force may have been the banana pudding though. It was extremely fresh and prosecco complimented it nicely.

But my favorite, favorite thing of the night was the pumpkin whoopie pie. It’s even fun to say. It had cranberries in it which gave it a nice texture.

Check ’em out while they’re decorated for Halloween!