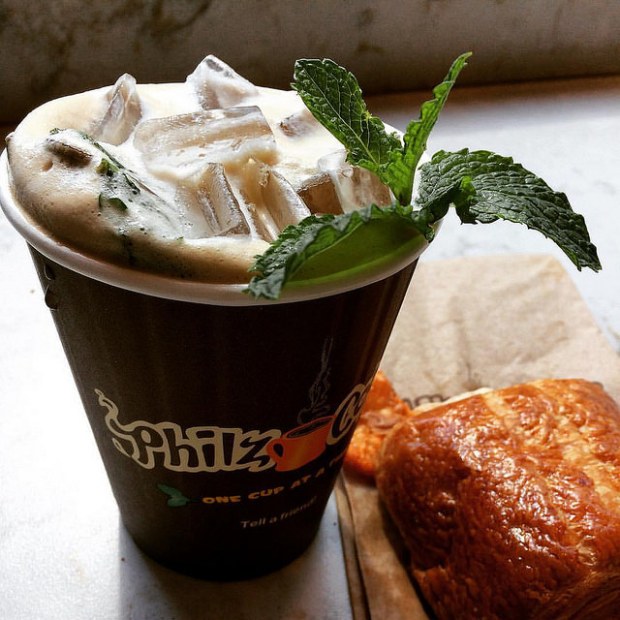 So I don’t drink coffee. At least, not daily and more often than not, I’ll get an iced tea — though for taste and not for caffeine. But I do love the smell of coffee. And I may have gone to a cupping or two. I’ve even helped with judging baristas training for competitions. And coffee dates are easy. So maybe I do drink coffee. All right yes, I drink coffee.

For years I’ve heard about Philz from the Bay area. They’re probably best known for their mint mojito iced coffee. Being The Minty means a lot of people ask you if you like mint (really?) and you comply by ordering something minty. Luckily, the mint mojito iced coffee is delicious. I had expected it to be artificially sweet but it’s not.

I found the new Downtown Los Angeles location a bit confusing though. You order from the barista, go check out then wait for your drink. Why can’t I order from the counter when I also got my ham and cheese croissant? But maybe they want you to interact with everyone.

In any case, it’s now very dangerous there’s a Philz in DTLA.

At Far East Plaza in Chinatown, I’ve eyed the coffee popup inside Scoops occasionally. So when I walked by after checking out the new Ramen Champ, I was surprised to find it gone. Instead, there was Endorffeine next door. The owner has moved his popup into a permanent space. They’ve been open for about a month.

I don’t drink coffee, right? So I wasn’t going to get anything. Instead I thought I’d have a sip or two of someone’s drink. But I ended up ordering a palm sugar whiskey iced latte after flip flopping from an iced green tea. The palm sugar simple syrup has been spiked with whiskey. But not enough to get you buzzed. At least not that kind of buzzed. There’s a pleasant huskiness to this latte. I enjoyed it and would order it again. But maybe I’d try the vanilla pandan iced latte next. 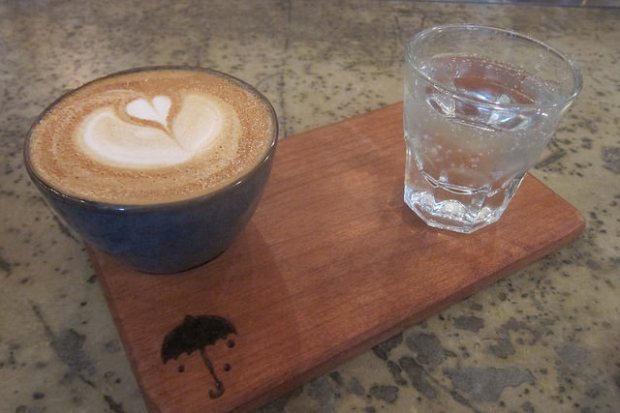 One of my favorite bars has started serving coffee during the day. Melrose Umbrella Company launched a list that includes espresso, americano, cappuccino, latte and something curiously called “one and one.” See, I don’t drink coffee so I decided to go with a tried and true thing I like- lattes. And this one was good. I also liked that it was served with a little soda water. I hate that weird coffee mouth you get sometimes after a cup. But this helps minimize it. I’m sure there’s some coffee geek screaming that’s exactly what it’s for (or not).

Melrose Umbrella also has coconut almond milk and their own vanilla syrup.

One thought on “Three New Coffee Shops You Should Know About: Philz, Endorffeine, Melrose Umbrella Company”