Koreatown: Checking Out the Korean Black Goat Stew at Mirak 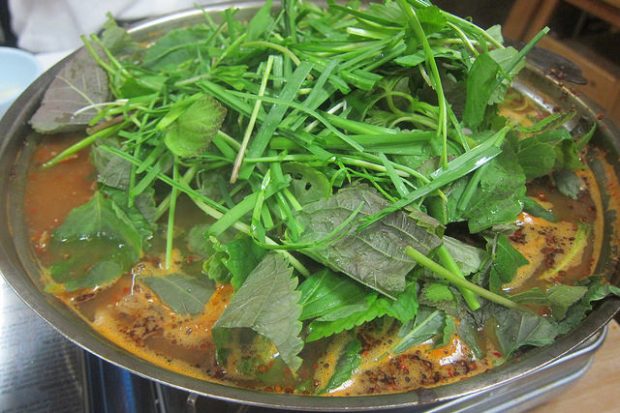 Last weekend, I wanted to eat in Hollywood after catching a flick at the Arclight but the Hollywood Parade made it impossible to get around so we headed over to Koreatown. As we drove past what seemed like a thousand restaurants, my friend finally asked me where we were going. I said we were getting Korean soup. Then as we were waiting for a table at Mirak, I said we were getting Korean black goat stew.

I’ve always liked goat more than lamb and in our multi-cultural city, I most definitely enjoy birria and Korean goat stew. Some even liken this to Korean birria.

close up on the tender meat

I’ve had Korean black goat stew at a few Ktown spots but I’m always up to finding new places. I’ve been seeing pictures of the stew from Mirak the last couple of years on Instagram and it seemed like a good time to check it out on the near freezing night (near freezing in LA being in the 40s).

Mirak serves only goat at this location. You can get it in a big pan, on a sizzling plate or.. well, you get goat. We got the stew for two and eagerly awaited it. Or maybe I was the only one eagerly waiting. My friend still thought I was pretty crazy to take her to a restaurant filled with mostly middle-aged and older folks with plain decor. I wasn’t deterred though.

The banchan is simple. The best were the marinated radishes and kimchi perilla leaves.

After your pan of happiness arrives, you eat the tender goat with the plentiful perilla leaves and leeks sprinkled on top. You can also swipe the chunks of meat through the sauce that contains wild perilla seeds, mustard and spicy sauce (gochujang).

When you can eat anymore, the pan is then filled with rice, seaweed and kimchi. Now it’s time to make kimchi rice! I noticed it gets really crispy quick at Mirak so it’s probably best to eat this right away.

my little bowl of rice

I had a couple of scoops of rice which helped me get the last bit of goat down. There were no leftovers though there probably could have been if we didn’t fall upon our food like a couple of starving women. It was just so warm and invigorating on a cold night. Hearing my friend say how good everything was was even better.

3 thoughts on “Koreatown: Checking Out the Korean Black Goat Stew at Mirak”