the huge fluffy doughnuts at Birdies

I was bummed out when Mabel’s fried chicken and waffles closed but was happy to see it re-concepted and became Birdies. It is still serving great fried chicken and added in doughnuts. The space has been re-tooled to better fit the coffee bar and showcase their interesting flavors of doughnuts.

I tried the lemon thyme pistachio and the strawberry with white chocolate. To my surprise, I really enjoyed the strawberry and thought the flavor was similar to Pocky’s strawberry (which is my favorite Pocky). I didn’t try the wackier stuff like the one with bacon or the outrageous looking s’mores one. I’ll let those with a sweet tooth handle those.

But I did get a fried chicken sandwich. There’s a spicy version as well which I might consider next time. After I try out the breakfast sandwich (because BACON!). The chicken was moist and it’s really best to eat it there, crowded against the counter seating. 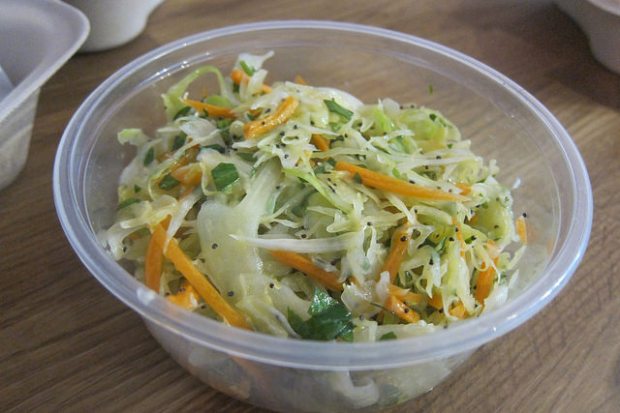 Birdies was offering a couple of sides as well. I opted for the cole slaw while a friend had the thick wedge potato fries. I liked my slaw but wished for a tiny bit more vinegar. And maybe less seeds. Still, it was a good slaw and nice with the fried chicken sandwich.

The spicy fried chicken sandwich appeared to be just like the regular one but had a spicy ghost pepper sauce.

If I hadn’t just eaten a bunch of potato chips week, I might have been tempted by the wedges.

Birdies has posted hours of 24 hours on Fridays and Saturdays. With the local clubs The Mayan and Belasco nearby, I could see how they might cash in on that late night crowd. But I’ll be returning for lunch.. and maybe a doughnut.