I’ve been stalking Torigoya ever since I heard it was opening. They’ve been open for dinner for months now but only recently opened for lunch. One day I walked by and saw an open sign so I decided to check it out. It was their soft opening for lunch and they had only one thing on offer. I got the curry of the day which was mostly veggies and a stray piece of chicken skin. But it was easily the best curry I’ve had. There was a rich creaminess to it that I swear comes from chicken fat.

That’s right, Torigoya is a poultry, mostly chicken restaurant. At night they’re better known for their yakitori (skewers!) but it’s all about Japanese comfort food during the day.

I said I’d be back when they open officially for lunch. When I next ventured over, they had 3 things on their very brief, well-curated menu. They have fried chicken (karaage), soboro (minced chicken) rice and that wonderful curry.

Each was $10 that included soup and salad. Or for $13, you can get two items (smaller portions of each). The salad may be iceberg but it has that tangy ponzu dressing I like.

This time the curry was all meat and it goes great if you add some of their bright red Japanese pickles. The soup is fairly standard miso soup.

I love, love, LOVE fried chicken and I’m still thinking about these delicious thigh pieces from a couple weeks ago. I almost wonder if they brine the chicken. They said they use Jidori chicken. Being a jaded LA eater, I thought everyone has Jidori chickens now. But I am questioning that because I’ve never had such juicy fried chicken. I almost wished I had only gotten the fried chicken but then I remembered I really like the curry as well. 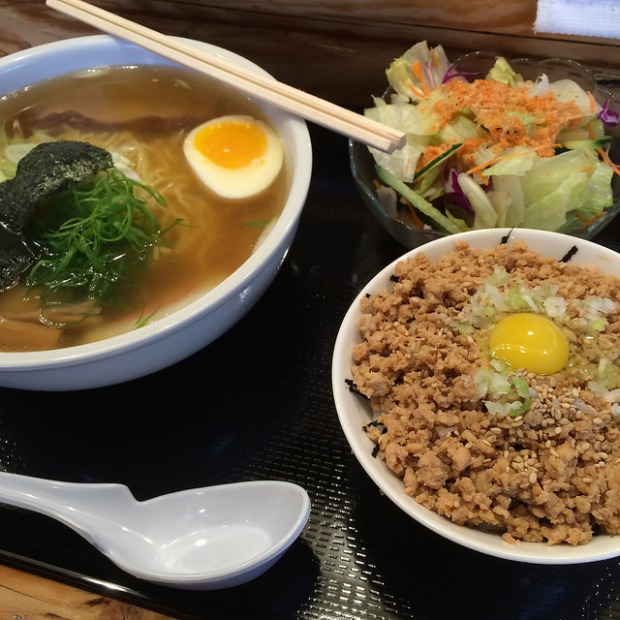 On another day, they were offering ramen as a special. It wasn’t quite there. The light broth was good but I felt the noodles were a little mushy. I did like the duck slices and I used some of the broth in the soboro rice. The minced chicken is cooked in a sweet soy and topped with a raw quail egg.

They may have only 3 items on the menu so far but I’m going to make this a regular lunch spot. And I will check them out for dinner soon.

3 thoughts on “Little Tokyo: Curry and Fried Chicken at Torigoya”