I checked out Tabachines Cocina about a week ago during dineLA. I’ve always wanted to try Tabachines as I pass it all the time.

To start, my friend and I shared the salad and maize dumplings soup. I liked how fresh the salad was and it had a very light dressingg.

When I saw the maize dumplings, I realized I had similar ones called chochoyotes at Broken Spanish. Tabachines’ version was more about the contents than the broth which was actually quite fine by me. I loved having easy eaccess to the dumplings, chunky vegetables, beans and avocado. 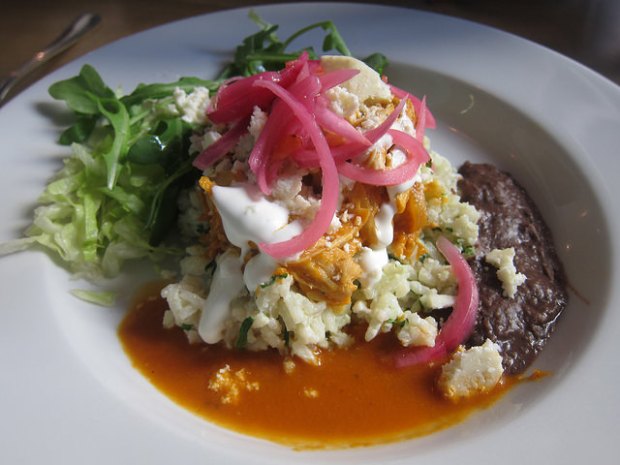 He ordered the chicken tinga which was served with Mexican risotta. This meant it was made with cotija cheese and spinach. We found it very interesting.

I had the carnitas which I enjoyed the pickled onions and crisp lettuce.

I would definitely come back to Tabachines. It’s refined Mexican cooking but hasn’t lost the flavor unlike another restaurant I just went to. The dinner menu doesn’t seem that different from the lunch menu so I see myself trying it more often for lunch.

I really want to try their version of a burger. You have the option of carne asada, green turkey chorizo or tofu. I’d also come back to try their green pozole.