sometimes people want you to take pictures of their drink

Although it’s fairly common now to see people take pictures of their food and drinks, it’s somewhat unusual when people want you to take pictures of their food and drinks. So the above is a cool looking drink with a nice yin and yang stencil. I have no idea what it is but I suspect it’s the Prosperity drink as the bartender mouthed “vodka” to me when I asked.

And that was one of my funny experiences at Mister Jiu’s. Sometime last year I had seen an episode of Chef’s Night Out featuring Brandon Jew, the chef from this restaurant and it inspired me to add it to my ever-so-long list of SF restaurants and bars. And then everyone I asked about it said it was impeccable. So my friend and I found ourselves there one busy Saturday night. Luckily we were able to find a couple of seats at the bar.

I love anything pickled and the fermented cabbage will have probiotics lovers happy. 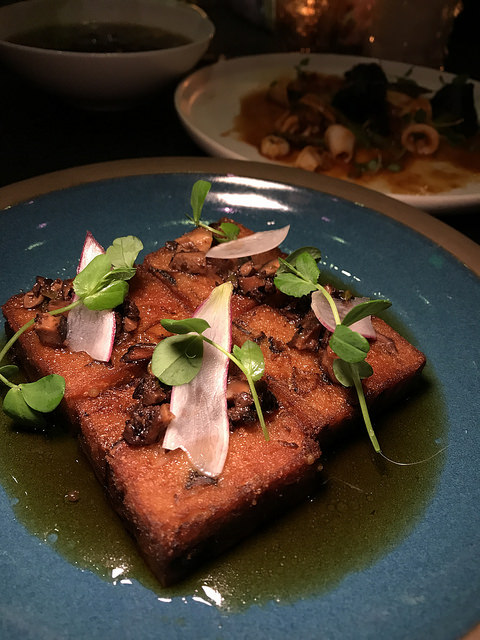 Reviews pointed towards the scarlet turnip cakes. I’m a big fan of turnip cakes during dim sum. These were good but I couldn’t help but think I wanted Devil’s Gulch pig head more. 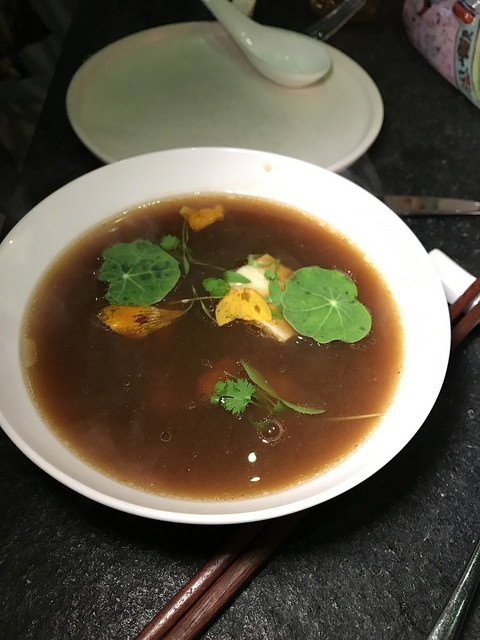 hot and sour soup with lobster

The hot and sour soup with lobster was easily one of the greatest things on the menu. I can see it being over looked however as most people are not soup fiends like me. Between the cabbage, soup and plain white rice, you could have a very excellent meal. But of course we got a couple of other things. 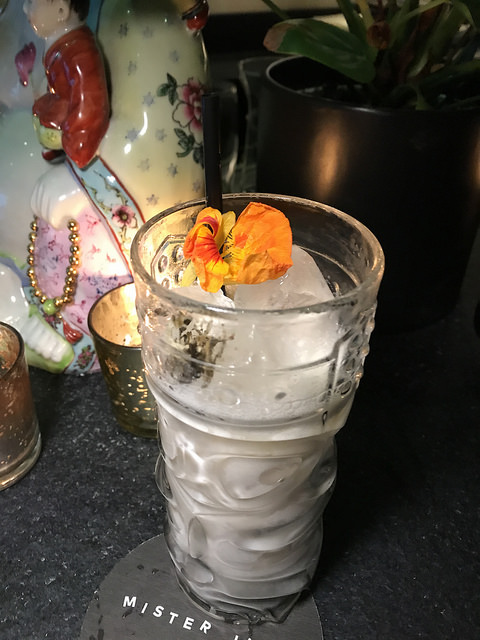 I had one drink at Mister Jiu’s. I chose Courage to try the jasmine horchata. I was also intrigued by the idea of whiskey and sherry with something as creamy as this. Would the sherry sour the drink? It didn’t! Happiness also looked good with gin, sour apple, gentian, jasmine tea and honey. Or maybe the Orange Jiu’lius which seems super fun with rum, orange juice, condensed milk and vanilla.

The pork wontons were great but what I enjoyed the most was the abundant Monterey squid strewn around the dish. And of course, it’s a striking dish as the dough are colored black from squid ink.

I really wished I had more time to explore more of the menu. I was interested in the aforementioned pig head, salt and vinegar shrimp chips, caviar cheung fun, the other dumplings including the shui jiao and potstickers. I also wanted to try the egg drop soup. Ah, I need another SF trip soon!

← SF: All the Gin at Whitechapel
SF: Snacks and Drinks at Lazy Bear →

2 thoughts on “SF: Dinner at Mister Jiu’s in Chinatown”