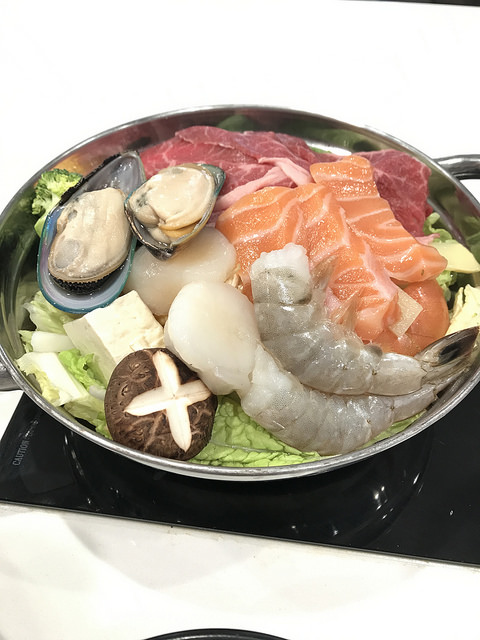 I checked out The Hon Shabu Shabu this week for lunch. I have walked by it numerous times on my way to Grand Central Market but this particular chilly day, I wanted soup.

I was prepared to get actual shabu shabu (DIY cook it yourself hot pot) but The Hon has some great lunch specials. I opted for one of their nabe pots. I chose the combo nabe which comes with both beef and a bunch of seafood including shrimp, mussels, scallops and salmon.

To start, we had the pan fried gyoza. These were huge and juicy.

My friend had the unazu which is a rice bowl with unagi (eel). This was a great deal with a ton of unagi.

We opted to sit at the counter which has individual burners (the kind that doesn’t actually burn you) and my nabe pot steamed very quickly. They come over once to ask you to turn over the beef so it gets thoroughly cooked. By the time I finished my second gyoza, my lunch was ready.

The meal is served with “black” rice though it’s really very purple. After eating all the protein and veggies, I polished off the remaining soup with my rice. It’s a comforting meal on a cold December day. I’d like to try the kimchi or curry nabes next time.