I checked out Freedman’s in Echo Park recently for lunch. I had been waiting to hear about their opening ever since I read a new kind of Jewish deli was opening. I’m a big fan of classic comfort food like huge sandwiches and matzo ball soup.

A note on the location, Freedman’s is located in a strip mall but there is no helpful signage until you’re right at the door. The other businesses have large signs with simple descriptions like “water.” 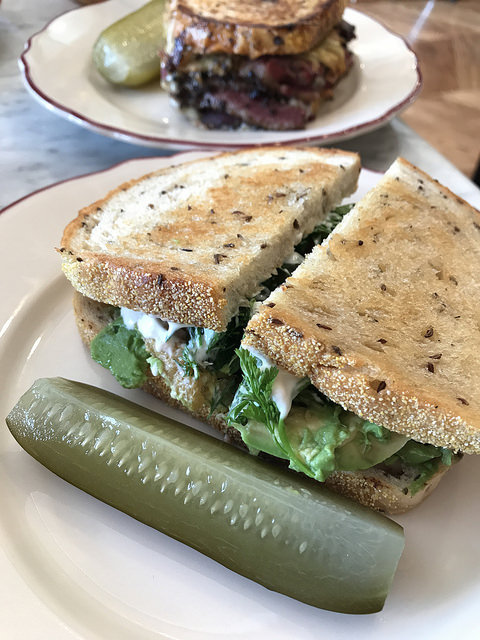 Freedman’s is indeed a new style mixing both traditional food stuff like Reuben sandwiches with new, dare I say, hipster fare like chicken skin and avocado sandwich (which could be considered the avocado toast of the new year).

I probably didn’t need to order extra pickles but I always fear never having enough sodium in my life (sarcasm). I’m glad these came with green tomatoes. The pickles themselves were not very snappy.

When I first ordered the matzo ball soup, I hadn’t done any research on it. And why should I? I expected a cup, perhaps a bowl of soup. Instead I got a retro-ish pot with lots of small matzo balls. It was as if a matzo ball had babies. This soup was good enough for four (but if you look on the dinner menu, this is expected to serve two). I liked it though it was a little salty and perhaps not enough chicken. Still, the matzo balls were very smooth, probably the smoothest I’ve ever had. My friend who is Jewish said she didn’t think it was very traditional to have such small balls but liked the soup well enough.

I rearranged the chicken skin and avocado sandwich

After a bit of food styling, I could now see the chicken skin in the avocado sandwich. My friend who wanted to get more Jew-y items didn’t care for this sandwich. I saw its merits; tasty mayo made with real chicken (I believe it was the broth not schmaltz) and tons of avocado but otherwise I’d probably decamp for the liver and tongue sandwich next time. I’m not actually into skin of any sort and so the fried chicken skin didn’t do it for me.

As for the Reuben(shown above), it was fantastic and I’d order this again. I frequently will get a gallon of iced tea and Reubens for those tough mornings after a bar crawl…

By the way, the iced tea at Freedman’s is really nice. However refills didn’t seem possible… 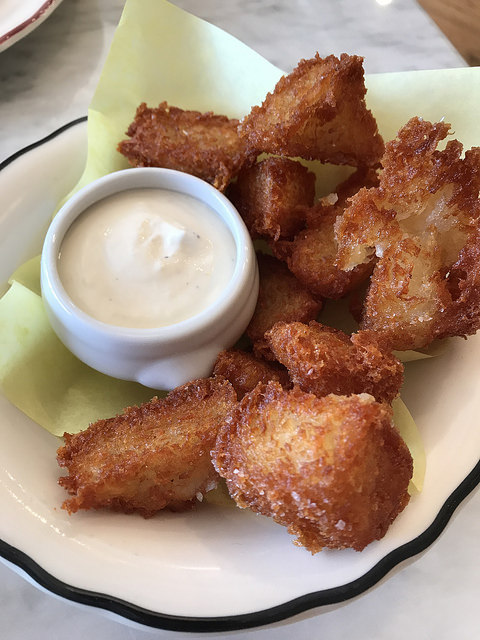 I also enjoyed the pommes Freedman which are their version of tater tots. Super crispy with enough soft potato goodness. The dip is horseradish. Longtime The Minty readers will realize I am not really a sauce person so I barely dabbed any on my spuds. Still, if you like that extra kick, go for it!

We also split a bagel because we heard so much about Canadian bagels. As it turns out, this wasn’t as sweet as I thought it’d be. Cream cheese was extra. There is a baller bagel on the menu. I’m not baller enough to afford a $23 bagel so yes, I griped about pay fifty cents for cream cheese.

Overall I thought the food was good. I’d come back to try some of the dinner items and the low ABV cocktails on the menu. But this was a very expensive lunch. Granted, I could have just shared one sandwich and soup with my friend… maybe the tots as well but we wanted to try as much as we could. Who knows when I’ll be back.