I was in Hollywood one late night and we decided to try Running Goose, a casual restaurant with a huge patio. We opted to sit inside as it was quieter and getting cool out.

We thought Running Goose was tapas meets gastro pub though these days it seems everyone uses “comfort food” as most user friendly description of their food. And we do need some comfort these days.

The three of us shared three appetizers including the gambas (shrimp), salt cod churros and the lamb chops. The shrimp were buried under a pile of bread so behold my awesome food styling skills to show them off. The garlic oil had a subtle spice that crept up on you. I liked the salt cold churros. That’s a neat spin on the standard brandade fritters. It felt very Californian. 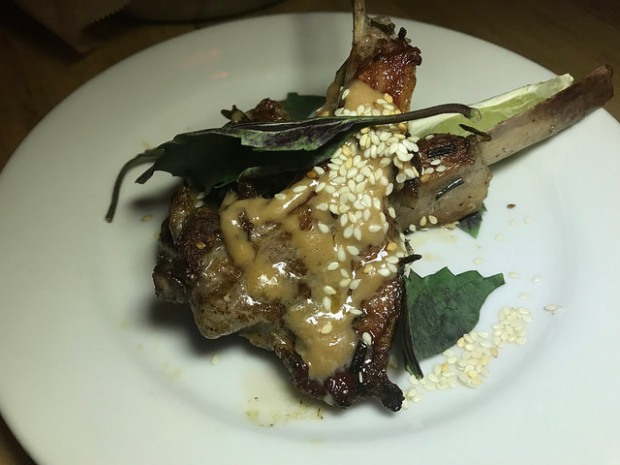 I was interested in the lamb chops for the tamarind and purple basil flavors. I did think it was kind of odd there were only two of them. These types of appetizers tend to be three in an order? In any case, I’m always happy to share. And we were started to get full when we had two entrees coming!

The short ribs came with plantain dumplings which the table really enjoyed. I felt like there should be a side of rice to go with all the awesome sauce. Luckily we still had a ton of bread left from the gambas. 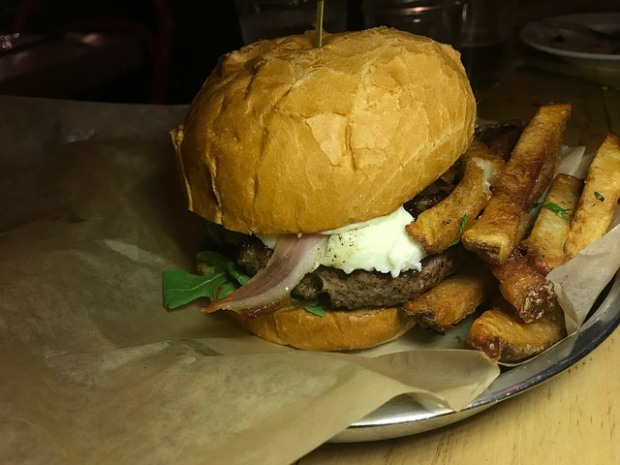 I was in a burger mood so we got the gringo burger and an order of fries (you get more fries than that, that’s my food styling at work again). I thought perhaps the burger was called gringo for the white cheddar fondue (look at all that cheese!). It was a messy burger but definitely needed after a long week! The only thing I’d change is make the bacon crispier.

Running Goose isn’t a bad stop before hitting the bars on Cahuenga.

← Bottle Share Nights: How To Build Your Collection
Mid-City: Noodles and More at Kai Ramen →