Like the first evening in Santiago, we headed to the town square of Paihuano for the festivities. We were in the Elqui Valley of Coquimbo, one of the two sanctioned regions that produces pisco in Chile. National Pisco Day was really a full week in Chile. After almost a week in Chile, I truly believed pisco es Chile y Chile es pisco (pisco is Chile and Chile is pisco). I said as much in several videos I made of the trip.

The square was dominated by Capel which although I did enjoy their more artisanal lines, I wanted to find out more about the local producer, Pisco Dona Josefa. The distillery was around the corner of the square. Sadly we didn’t have time to check it out as we had to get to lunch with our host, Pisco Chile at La Escuela.

hearts of palm salad with avocado at La Escuela

Pisco Chile had brought local journalists as well as journalists from around the world to experience the magic of pisco. After a week of the grape spirit, stories about UFOs, the beauty of the land and all the friendly street dogs everywhere, I’m plotting to see if I can return next May for National Pisco Day. It’s the best time to go as the weather was perfect. I would love to see the nightlife of Santiago and explore more of La Sirena.

Before we headed out to one of the most traditional pisco distilleries, I’ve seen, we had a fine meal at La Escuela. The goat ribs were so good as well as the hearts of palm salad. I wish there was time to slide onto one of the many bar stools topped with saddles.

We were off to Fundo Los Nichos, As mentioned, this is a very traditional distillery. Although there were large modern fermentation tanks (for the wine that is later distilled into pisco), the process remains the same. And then there are the caves with alcoves where wine was stored. The art around the cave reminded me of a cross between religious and gothic art.

We tasted four expressions of Fundo Los Nichos. Actually, it was really two– both had different proofs so four in total. I actually preferred the lower proof which was surprising since I normally go for anything high ABV. What’s great is I have had Fundo Los Nichos in the US.

Our visit was all too brief but then again, I was starting to get a bit spooked by the art! I’m glad it was still sunny when we left.

On our last night in Chile, we had dinner with Pisco ABA at our hotel in Vicuna, the Hotel Terral. It’s quite the charming place with both traditional and modern rooms. They even rent telescopes for star gazers. Chile is great if you’re into astronomy as there a few observatories in the north.

Earlier in the day, a street vendor told me fantastic stories of Asian monks traveling through the Andes to found a monastery and also encouraged me to buy a map of alien space ship crash sites. The government has of course cleaned up the areas but you could still go see the sites he confidently told me. I think I’ll stick to just looking at the night sky with my fellow pisco lovers. He was selling jewlery of various stones and metals. Chile is a wonderful place if you’re into that as I am. I got a tiger’s eye ring from him and later a lapis lazuli ring the next day. Lapis lazuli is the national stone of Chile. Make sure you get the blue stones with white veins. 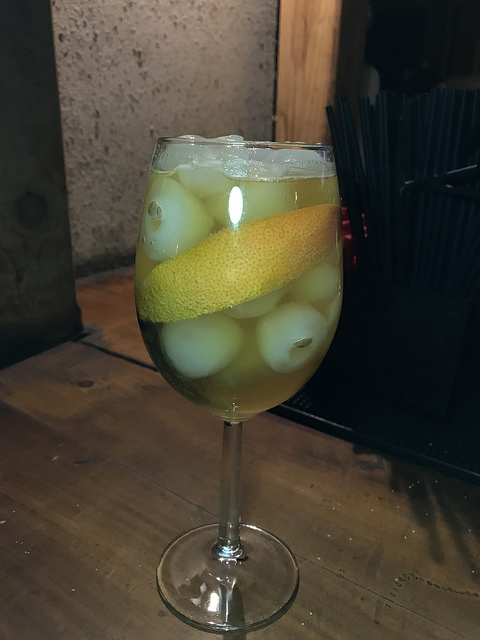 When I arrived to the rooftop of our hotel for the cocktail reception, I recognized Pisco ABA as the first pisco I tried at the Bellavista patio tasting! Despite my lack of Spanish and the representative’s lack of English, I had procured myself a tasting glass. We greeted each as old friends at this party.

Pisco ABA also has a sister brand, Fuegos. ABA has won awards including a gold medal at the San Francisco World Spirits Competition in 2012. And it makes a tasty drink! I was surprised I didn’t have my millionith pisco sour that night but I readily tasted the ABA and Fuegos neat again.

It was at this dinner where I had a fascinating talk with the professor who studied pisco. She asked me to come up with a new pisco drink. I shall!

The next day was our final day in Chile. We left Vicuna for La Sirena where we tooled around town a bit before lunch. We picked up some more souvenirs and admired more of the cute dogs everywhere.

We went to Moscatel in La Sirena. They’re known for their big collection of pisco and is known as the “house of pisco. When you go past the small coffee bar and main bar on the ground level to dine upstairs, you’re treated to a mural depicting the history of pisco.

One of the best salads I had on this trip was this hollowed out tomato that was stuffed with egg salad.

We had variations of popular drinks made with pisco including a Manhattan, Negroni and Mule.  We also shared a flight of a pisco producer we didn’t get to visit.

For my main course, I had pork. Can’t live without pork though most of my table had the fish. I suppose that would have been the right choice as well considering we were in a beach town.

Then we had an easy journey to the local airport and a mad dash through the airport in Santiago to catch our international flight home. It was a whirlwind and I wouldn’t have it any other way.

** Thanks to Pisco Chile and New Legacy Wine and Spirits for the opportunity to learn about Chilean pisco.

← DTLA: Lunch at The Mighty
Koreatown: KBBQ at The Corner Place →