Although it seemed like I just wandered around the Central district of Hong Kong, I purposefully selected the area because of the vast amount of restaurants and bars I wanted to go to were located there. While at PMQ, I noticed The Old Man was nearby. It is purportedly the best bar in Hong Kong and was just named number 10 of the World’s 50 Best Bars.

After locating it down the stairs, I had a hard time actually opening the door. I finally resorted to knocking. It turns out there’s a simple trick to slide the door open but I only learned it later. You flip the switch up and then use it as a handle to slide the door. Fortunately knocking works when the bar is quiet. And since it just opened for the night, there were only two others at the bar.

The Old Man is named after Hemingway. And the drinks are named after his works. For my first drink, I had A Clean, Well-Lighted Place. As I thought about how few of his books I’ve read, a pretty speckled drink appeared in front of me. I have it on the wooden part of the table for the photo but you’re supposed to keep your drinks on the metal strip running along the center of the table. It keeps the drinks cold. But the bartender will know if you haven’t sipped it in a while because it will get stuck.

The drink features sweet potato infused rye. It’s been run through a rotovap which other bars around town are calling it a re-distillation. I mostly got the sourness of the soda from this drink.

The Torrents of Spring

Next I had the Torrents of Spring which I was intrigued by the glutinous rice infused mezcal. However, it’s more whisky based. I liked this drink over my first one.

I was at the bar during London Cocktail Week so the main players were out of town. I’d still return though as the bartender was very earnest (but not Ernest Hemingway) and eager to make good drinks. I also liked the room. I may have moved away from fancy mixology type drinks but I’m still interested in the process and seeing people’s creativity. 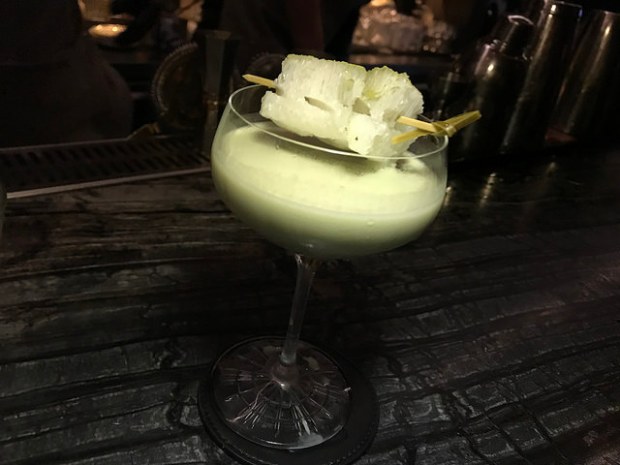 I hadn’t initially wanted to go to Quinary as I heard it was a “mixology” bar. I wasn’t too interested in smoked or foam drinks but it turns out I loved my drink and they were very nice to accommodate a single drinker like me even though they were packed and people actually had reservations for the bar. And I felt very much at home at this bar once I observed the staff drinking Fernet-Branca and the head bartender wore a single black glove like a couple bartenders I know. These are bartender’s bartenders!

Quinary is in SoHo and is best known for their Earl Grey Caviar Martini. It’s so popular, several bars in Hong Kong have copied it (more on that later). I didn’t try it but I did get the pin!

I had a drink called the Happy Cake. In Chinese, pistachios mean happy fruit. No wonder I like pistachios! It’s one of my favorite nuts and absolutely the ice cream flavor I gravitate towards. The Happy Cake is like the best pistachio ice cream in boozy form. I’ll have to remember this drink the next time I break out the rum and genever.

In front of Quinary is a giant coin operated machine. For two Hong Kong $10 coins (that would be $20), you an try your luck for a free pin, drink or more. My luck held and I got a pin. Although I would have not minded a free drink! 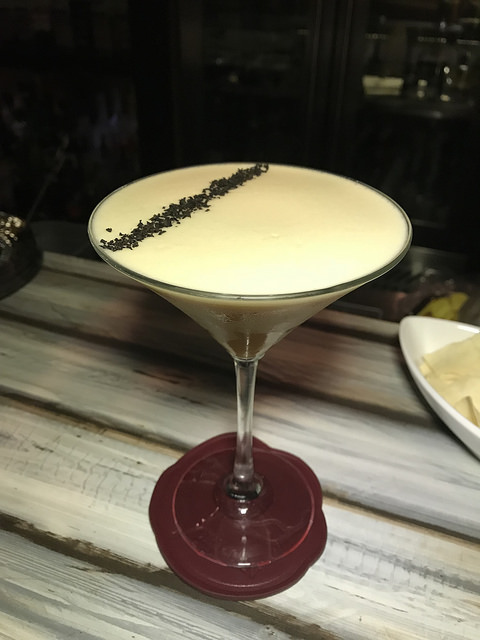 During the day, I had spotted Ori-gin and made a note to come back to try it. it was on my list of gin bars to try in Hong Kong. I thought it was interesting they had an Earl Grey Martini on the menu like Quinary. It turns out it’s run by the same group which is headed by Hong Kong’s star bartender Antonio Lai. He also has the program at the Envoy and Rom 309. I also tried to go to Angel’s Share which he has a hand in as well but it wasn’t open when I stopped by (note a lot of bars don’t open until 5 or 6).

Ori-gin While I appreciate the snacks at Hong Kong bars, I probably should have gotten something more savory to go with the strongly flavored onion chips.

The bar itself reminded me a bit of Bar Kitchen at Hotel O in Los Angeles. I liked the space quite a bit. 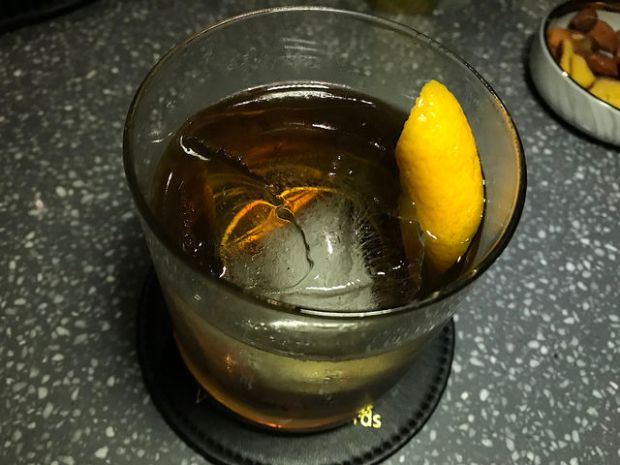 No Woman No Rye

I heard about Whisky and Words from a bartender friend in Hong Kong. It just opened within days of my arrival and I was up to checking out the new bar. The first part of the menu are a bunch of whiskys they have. You have to check out the back pages for the cocktails. I ordered No Woman No Rye which is essentially their take on an Old Fashioned whisky cocktail.

The bar was a bit awkward and I felt a bit hemmed in. It would be much better to sit at a hightop table but I like bars and I like watching bartenders make drinks. It’s nice to have a chat too. However, this was the only bar I visited with a friend (yes, I went to 14 others by myself!) so I didn’t have time to get the full backstory on the concept.

I’d give them some time to settle into a groove. Or as my bartender friend said, “you can always go to COA across the way.”