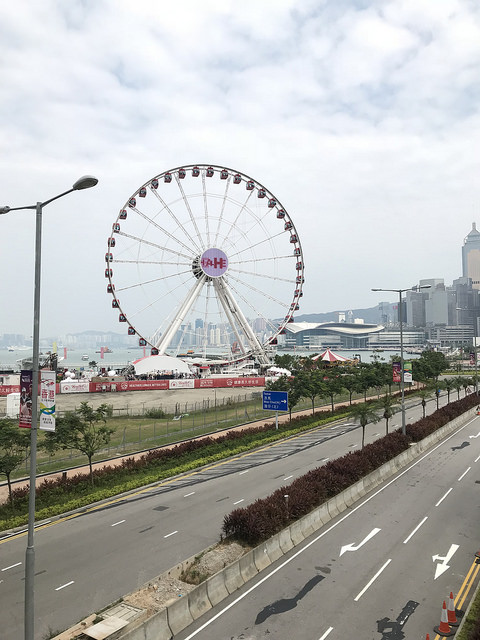 The days in Hong Kong were merging together. Every day I explored a different neighborhood though in truth, I’d need to be there for a month or more to really see everything. I decided to explore Causeway Bay and Tsim Sha Tsui (and more of Central!).

I had heard of SOGO from blogger pal, One More Bite, who described it as a Japanese mall with wonderful treats in the basement. 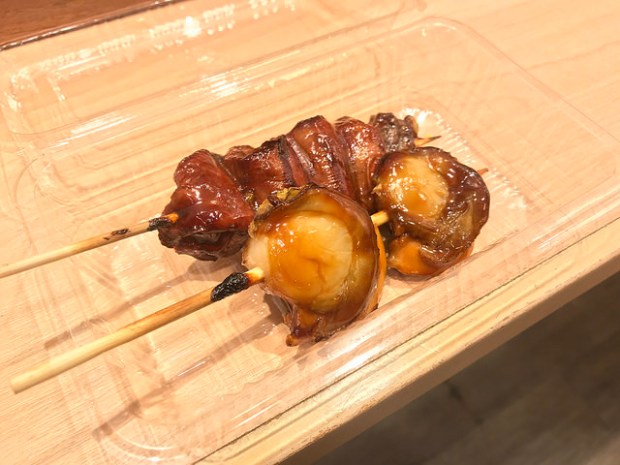 I hopped on the MTR which conveniently let out at SOGO. I headed to the basement and saw many Japanese food stands. It was a food hall dream come to life.

I usually ate a couple of snacky things before searching for lunch so I decided to get a couple of skewers and took a rice ball to go.

I loved the chicken liver and scallops! So fresh!

I watched a man stockpile the snow crab rice balls so I nabbed one before he could get all of them. 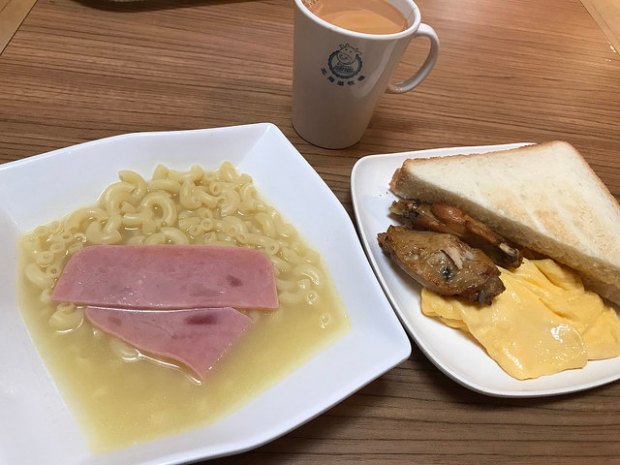 I left SOGO and walked to Hysan Place. This huge mall had lots of shopping but I was intent on looking at the food options. There were some restaurants but I thought I’d hit up the food court. There was everything you could want; burgers, pho, etc. But then I saw it. The Hokkaido Dairy Farm. I got my childhood favorite ham and macaroni soup and a couple of wings. The combo also came with weird eggs and toast which I ate but I hear that is better over at the Australian Dairy Company. I didn’t go find out but this was an okay lunch.

Flat white and cheesecake from Eslite

Then I wandered over to the bookstore run by Eslite. Within the store was a florist and cafe. I had a mini cheesecake and a flat white (it’s like a latte) while I thought about if I could live in Hong kong.

The quiet cafe was a perfect place to dream. I wished I had my bullet journal on me to jot down some thoughts but it’s a good thing I have notes on my cell! 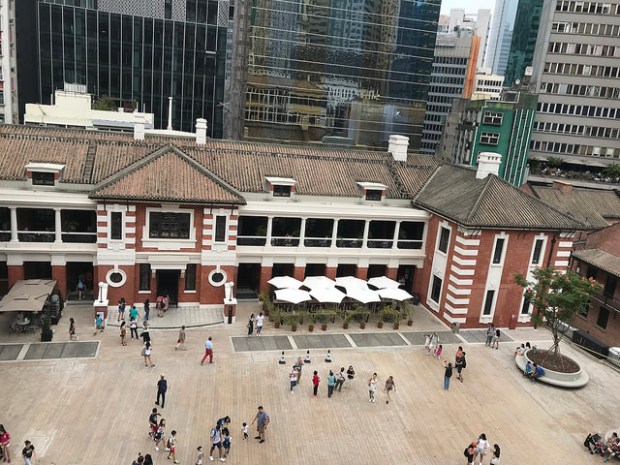 On my first full day in Hong Kong, I walked by Tai Kwun which is the old police headquarters. Tai Kwun translates as the Old Jail. It’s now been turned into shops, restaurants and exhibits.

Within moments of arriving to Tai Kwun, we decided to get caffeinated. I adopted milk tea as my beverage of choice during the daytime. Mao Mao Eat made an excellent one. 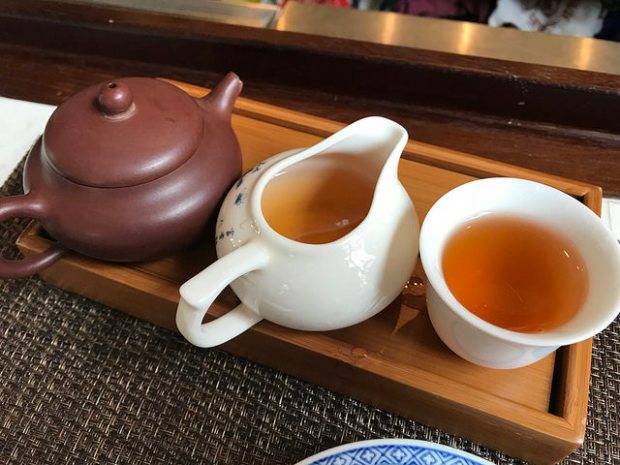 After wandering around Tai Kwun, we needed a tea break. We settled into Lock Cha, a vegetarian dim and tea shop. I finally got my favorite tea and had a couple of snacks.

I ordered mushroom dumplings and veggie siu mai. They were both great. I love anything with mushrooms and you never miss the meat. 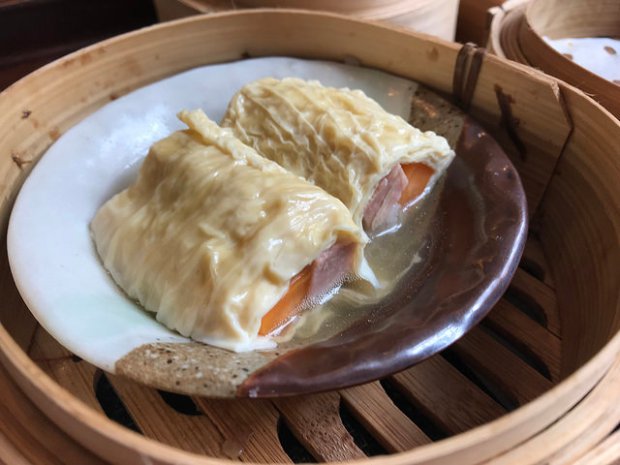 However, the tofu skin wrapped veggies and mock ham was a miss for me. I am not really a fan of faux meat. It may have looked like ham but it wasn’t ham!

I also saw lots of noodle orders going out. But I wanted to save room for dinner.

I loved this art installation I spotted after I got off the ferry (about a twelve minute ride from Central to Tsim Sha Tsui aka TST).

After browsing some shops, we had a break at Hexa for cocktails and fancy dim sum. Okay, so I was saving room for dinner but how could I resist such fanciful creations?

I tried the PTBF which stands for part time boyfriend. My uncle asked for an old fashioned and my aunt tried the 80s Pop Star as she likes tequila (and mezcal). I basically had a really fancy whisky sour while my aunt’s drink was the table’s favorite. We always love drinks in pineapples! 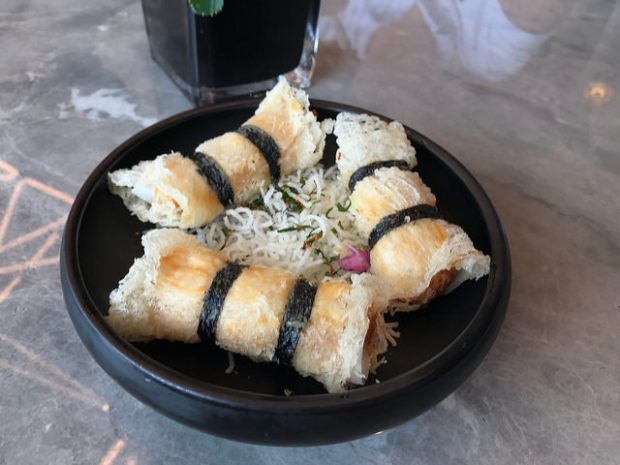 We ordered a bunch of dim sum including these gorgeous rolls at Hexa. I would call these shrimp foie gras egg rolls.

Shrimp toast was one of my guilty pleasures at dim sum growing up. These were more like little sandwiches which made them even better.

I felt the shiny black har gow had skins that were just a little too thick. Charcoal gives the dumplings the inky black color. I found all the shrimp dumplings I tried in Hong Kong were just okay. What I didn’t do was a traditional dim sum so I’ll have to be back for that soon.

We also had black garlic siu mai (not shown). The black garlic is very mild and was diced into tiny bits to resemble roe on the pork dumplings. I liked these but I always favor siu mai a little more than har gow.

I have friends who would have loved these charcoal salty egg custard buns. They not only looked great, they also tasted good as well! 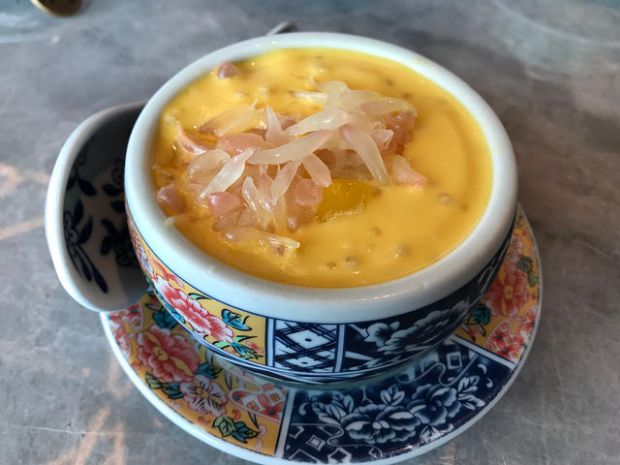 We even sneaked in dessert. I like Asian desserts because they’re generally light and not too sweet. I loved this sago mango pudding for the grapefruit which gave it a nice tang.

oysters at Three on Canton

Before checking out the fireworks, we had dinner at Three on Canton, a buffet. There were a mix of Chinese and Western dishes as well as some other Asian favorites including Indian curry.

I was mesmerized by the cheddar fountain.

I really was into the carving station, the Peking duck, the roast pork and various veggie dishes. 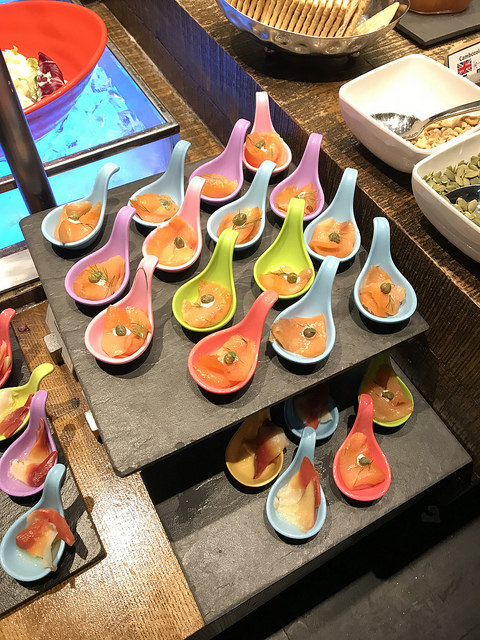 clams at Three on Canton

I love, love, love seafood. Three on Canton had a great selection. They even had these cute surf clams on colorful spoons. My favorites were the sashimi station, the lobster, crab, shrimp, fresh shucked oysters and cooked fish.

one of the many desserts at Three on Canton

I got full on savorites so I was only able to eat fruit for dessert. But all the desserts looked lovely. And there was a chocolate fountain!