In late September, I saw something interesting called the Cognac Classic Crawl. I like bar crawls and I like brandy. However, I was heading out to Hong Kong so I forgot about it. When I was back, I came across it again. For $30, you got to try a cognac cocktail at five bars in Downtown Los Angeles. Plus 100% of the money went to charity.

Once I saw the participating bars and sent the event details to a friend, she said: “well, these are all your bars.” It was true, all five were some of my fave bars in DTLA. So, we tried to go to all five in one night. Sure, you had all month to try all of them but that’s not a crawl to me. That all five in one night plan was derailed when one bar was closed for a private event. I suggest in the future making sure all the bars are open when you go– that is, if you try to do them all in one evening.

We started at Redbird where you picked up your punch card and a nifty tote bag containing the recipes for the drinks.

Redbird and beverage director Tobin Shea also offered a cognac and tonic if you wanted to try something other than the cognac drink on offer. The tonic is housemade.

Both were delicious. We also got some pasta to go with our lovely drinks. 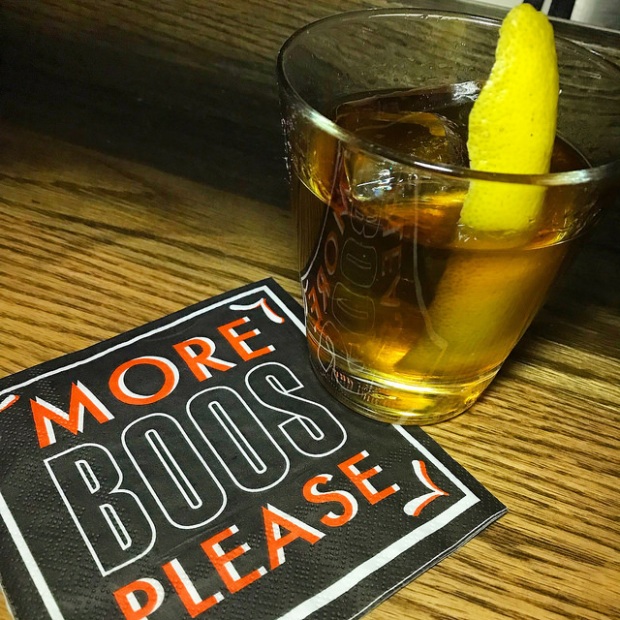 As mentioned, this crawl was during the month of October so at Bar Clacson, we saw the bar all dressed up for Halloween. I just adored the bar napkins! More boos (booze!!) please!

I’m more of a stirred cocktail person so I was really enjoying this crawl.

We tried the Peacock at Clacson which bar manager Dustin Newsome said is a classic cognac cocktail. I also felt a special affinity for Clacson participating in this crawl as they have brandy appreciation night on Sundays. 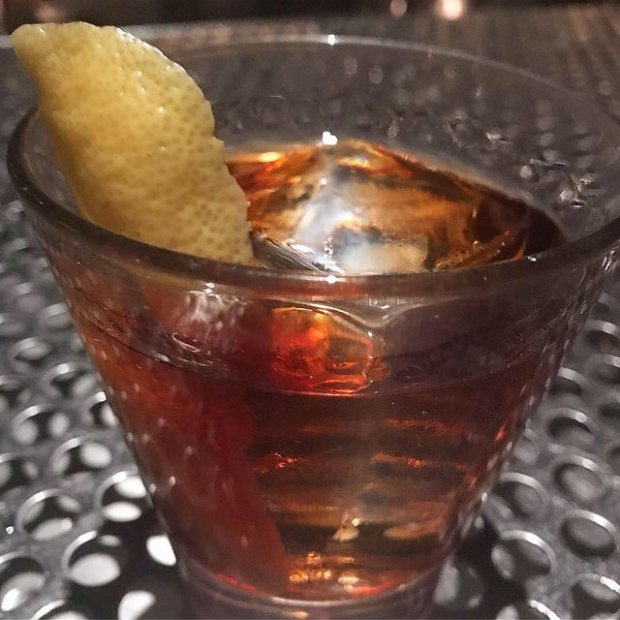 My favorite cognac cocktail was at The Varnish. Of course, it also featured my fave Cocchi Barolo Chinato. Brown, bitter and stirred! Ahhh, you really can’t go wrong with this drink and it’s still on the current menu. Bar manager Bryan Tetorakis mentioned the crawl sold around 400 tickets! How wonderful everyone was learning about brandy and specifically cognac.

We resumed our crawl on another night at Otium. Here we also had the fab pork and always delicious potatoes to go with our drinks.

Ryan Silva created this Sidecar variation with a maple marshmallow foam. I feel I can make the other drinks easily at home but I’ll have to return to Otium for this genius drink. Side note, now that I’ve seen maple in two different cognac drinks, I want do some experimenting with this flavor combo.

I was sad when we hit our last bar. But at least the bar is a fun one. I love the rooftop bar, Broken Shaker. It’s such a fun vibe. The drink by bar manager Christine Wiseman, is a stirred cocktail featuring an American apple brandy along with the cognac. Between the maple drinks from earlier and this apple one, I felt like I was gently eased into the fall season.

I hope there’s another cognac crawl next year. Or perhaps in another city I can hit! I saw Chicago also had a Cognac Crawl in October.

416 West 8th St., Los Angeles, CA 90014  —  (213) 261-3599
Quick Cognac Facts –
Cognac, France was known for its wine in the 13th Century
They learned distilling from the Dutch who distilled the wine into brandy in the 16th Century
Later Cognac was granted an AOC in 1936  so only brandy distilled in Cognac can be called that
Cognacs are generally blends: