I’m kicking off a week of Scotch! The Minty’s first Scotch Week starts with Aberlour. I recently attended the Southern California Whiskey Club’s special tasting with Aberlour presented by at the Ever Bar at the Klimpton Everly Hotel.

Aberlour brand leader Andrew Weir led us through the tasting. 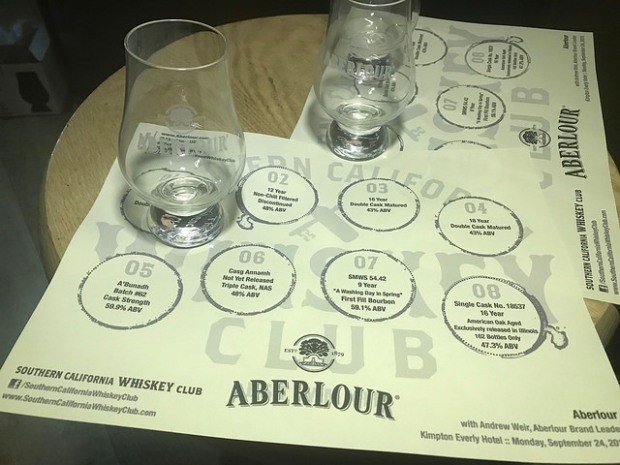 I loved doing side by side tastings. Tasting a 12 against a 12 that was non-chilled filtered is so different. The regular 12 seemed more “drinkable” but I know those who call themselves “real” whisky drinkers prefer non-chill filtered.

Am I a real whisky drinker?

Andrew brought a special bottle that was only available in Illinois.

The 16 cask 18537 has only 162 bottles. It’s very interesting to compare it to the other 16 which had been matured in two casks. This one was matured in a bourbon cask only. I thought it was a little bit sweeter due to the bourbon cask.

Aberlour was also launching the cask strength Casg Annamh which they said would be available by Thanksgiving. If you look closely, this is bottle 1! I tried it earlier in the day at a distributor event and again in the evening for the SCWC tasting. I tasted it yet again a couple of weeks later (it was still bottle number 1!) and I can safely say I like it.

Although my overall favorite is the A’bunadh.

I loved the drink the Ever bar was featuring with Aberlour. It’s basically an Old Fashioned but instead of a big cube of ice in a glass, it was just a giant block of ice. I imagine if you were drinking on the set of Game of Thrones, this is what vessel you’d want.

I really like how SCWC events strive to feature special releases for members. Getting a whisky exclusive to Illinois, a preview of an upcoming edition and even a private bottling (the SMWS “A Washing Day in Spring”) is what marks these events apart from other local tastings.

Ever Bar at the Klimpton Everly Hotel

← DTLA: Cognac Crawl at Redbird, Bar Clacson, The Varnish, Otium and Broken Shaker Recap
The Minty’s Scotch Week: The Dalmore Whisky and its Relationship with Sherry →

One thought on “The Minty’s Scotch Week: Checking Out Aberlour with Southern California Whiskey Club”