I recently attended the Scotch Malt Whisky Society 35th Anniversary and Los Angeles launch at the British Consular’s residence. For today’s The Minty’s Scotch Week post, I’d like to recap the whiskys and what it was like mingling with die hard SMWS lovers.

SMWS is not just an independent bottler. They have built a society of 10,000 members from around the world. There’s an estimated 400 in California. SMWS has an American component (SMWSA) and they hope to have regular tastings at whisky bars and clubs in LA. Society membership is fairly inexpensive and you have access to all their great stuff and tasting parties.

There are various “cheat sheets” with the SMWS codes that members use to decipher the distillery. They’re all unofficial as SMWS does not actively promote the distilleries. They want people to taste and figure out if they like something. But you know whisky nerds… as I was talking about deciphering the codes, a member casually pulled up his cheat sheet.

But for those of us new to SMWS, I found this one helpful.

The Halcyon Tartest is a 10-year-old Ardbeg. I actually didn’t need a cheat sheet to figure that out. It’s a peat bomb like all Ardbegs to me. I liked it but I don’t suggest drinking it first like I did. And definitely rinse your glass after so you don’t mix it with the next dram. Tarfest, indeed.

The Thermonuclear Banana was the only grain whisky we tried this evening. It’s a 10-year-old Rhosdhu. I’d like to try this one in a cocktail.

Perhaps the banana in the name makes me think a Banana Rob Roy would be interesting.

I heard from quite a few people that evening how much they liked the Honey Cake with Elderflower Icing. It’s a 7-year-old Blair Athol. I differed and it was my least favorite. It’s fine but I wouldn’t reach for it again. That’s what’s great about tastings. You get to discover what you really like. 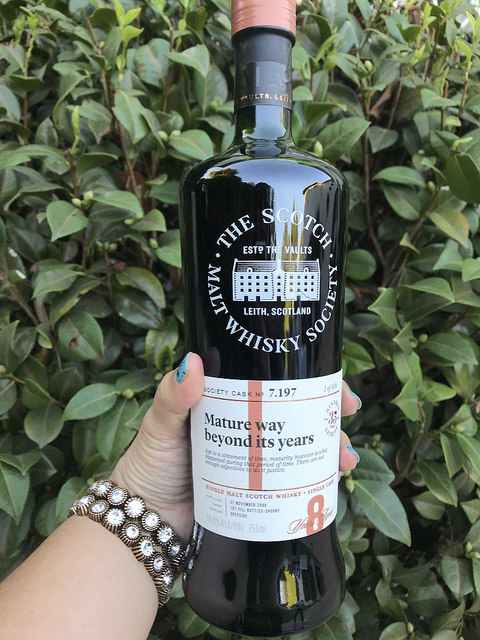 SMWS – Mature way beyond its years

I may be getting the hang of the naming conventions of SMWS. Mature way beyond its years is a nod to the 8-year-old Longmorn. This was my second favorite dram of the evening. It

Thyme Well Spent was the oldest whisky we tried this evening. It’s a 30-year-old Glen Grant. I really enjoyed it which surprised me as occasionally I feel overly old Scotch can lose its vigor.

However, this was the opposite of the mothball-y whiskys I’ve tried. To be sure, it’s an after dinner, sit on the patio outside sipper (this is LA, we rarely sit by fireplaces drinking whisky). It was my favorite of the five.

I noticed SMWS does bottle more than whisky. And I’m not talking about all the Irish, Japanese, American, Indian, etc whisky they have. But there are also independent bottlings of rum, gin and Cognac/ Armagnac. Now that would be a fun tasting to do- taste the best of what SMWS thinks of those spirits.

← The Minty’s Blog Anniversary and Repeal Day Party on December 5
The Minty’s Scotch Week: Glendronach Returns with the 15 Year Revival →