Earlier this year I visited two Korean seafood BBQ spots; DaeBuDo and Jae Bu Do. I liked both quite a bit and it was hard for me to say which one was the better one. Then I started seeing another Korean seafood joint called Get Bbul. I grabbed a few others and we checked it out.

Is it a Ktown meal without beer and soju?

Since there were four of us, we got the medium combo which included a small order of hagfish.

What is hagfish? According to some disturbing videos and photos online, it seems to be a creature that secrets a lot of slime and some people eat the fish and/or slime. 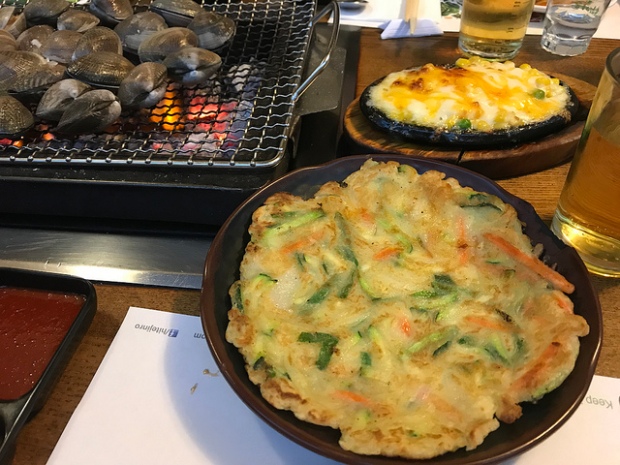 Some of the banchan included a steamed egg (not shown), pancake, corn cheese as well as some ceviche. 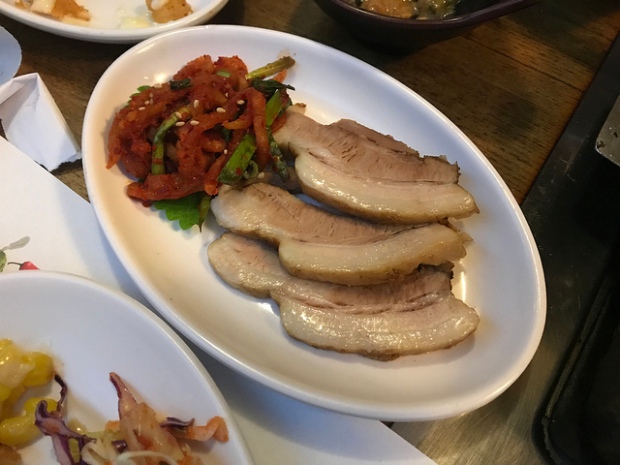 Plus there were even a couple of pork dishes as part of the banchan. I liked the bossam. The other pork dish was with horseradish-y sauce I didn’t love.

So we were freaked out about the white stuff coming out of the hagfish. I felt it was the vertebrae escaping the poor thing. And once your Korean server cut it up, it was quite obvious!

I ate a piece wrapped with perilla leaf and a lot of garlic.

The funk was apparent and I refused to eat more of it. 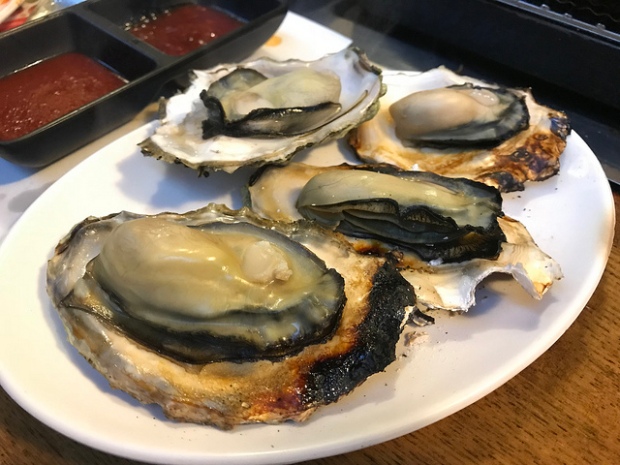 But I happily ate the baby octopus, peeled the shrimp and ate the plump oysters. These things tasted good!

Plus the abalone was tasty. I do have to say I probably should have ate it when it was first presented to us but I wanted to make sure it was really cooked all the way through and then promptly forgot about it. Which then was a bit tough when I finally did eat it.

I loved the noodle soup! I was so full but couldn’t help but down a bowl along with some kimchi.

We also got the potatoes out that had been grilling under the wire rack. The potato was a little dried out but the sweet potato was pretty good.

Although our meal was generally excellent, I can’t say I will come back. Between how smokey it was, the odd communication about the banchan and no desire to see hagfish again, I’ll stick to either DaeBuDo or Jae Bu Do.

One thought on “Koreatown: Korean Seafood BBQ at Get Bbul”