After dinner at Pho Broadway, we walked over to the new Songbird speakeasy. By day it doubles as a coffee shop. They’ve been open for about three months. The original concept was an amaro focused bar.

The drinks are divided into two categories. The first set of drinks play up the two favorite human emotions; Love and Hate. The other page of drinks are more lighthearted in tone under the section, Sing and Dance.

Although I managed to find the one drink on the Sing and Dance section that is perhaps not as happy-making called Backhanded Compliment. Who likes those? Well, then, this drink is not like that at all. I can almost see this in a tiki mug with a pineapple leaf sticking out of it. It’s a refreshing mixed drink.

It’s a bit funny when people describe how to enter a speakeasy. Luckily this one was not hard to find as there are giant birds on the windows. You hand a left and enter the welcoming bar.

Break Up by Text

My buddy had the Break Up by Text which I think is a hilarious name though perhaps not as funny in real life. At least it’s not called Ghosting?

This is billed as a highball with rum and Branca Menta. I almost want to call this a cold toddy though with the addition of lime and honey. 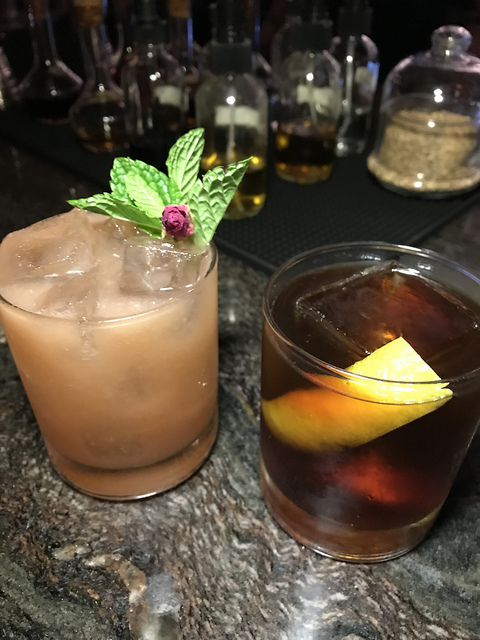 The show stopper drink and yes, everyone must instagram this is the Second Hand Smoke. I noticed the tube with smoke goes into a neatly slotted spot on wooden base under the glass cloche. That’s very neat as usually people just stick the smoke under the glass and hope not very much escapes.

We also tried the Songbird which my friend found too floral (atomized rose!) but I enjoyed the note.

Overall we had a good time. Songbird has six different fernets and hope to have more soon. I’d like to try some of the amari I haven’t had before and explore more of the menu. I’m glad there’s another bar option in Chinatown as there aren’t too many cool bars in the a neighborhood that tends to go quiet after the dinner rush.